Pope to moms: It's OK to breast-feed in public, even in Sistine Chapel 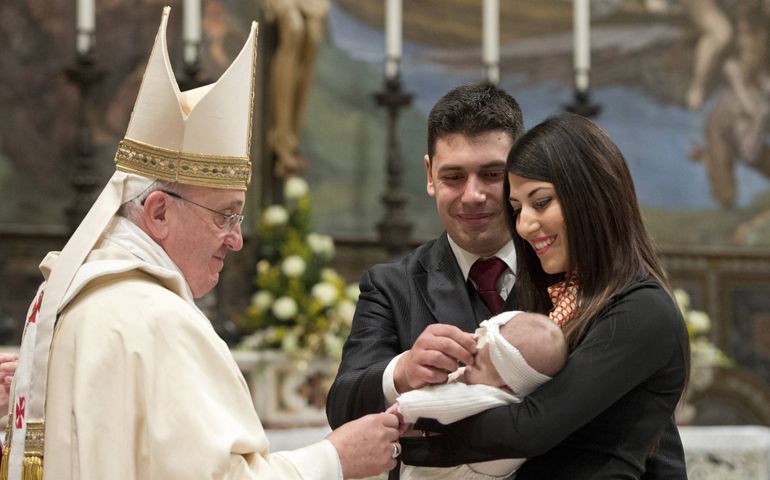 Pope Francis looks over an infant as he baptizes 32 children Sunday in the Sistine Chapel at the Vatican. The celebration marked the feast of the Baptism of the Lord. (CNS/Reuters/L'Osservatore Romano)

Vatican City — Pope Francis assured mothers that breast-feeding their babies in public, even during a papal Mass in the Sistine Chapel, is OK.

No chorus is as wonderful as the squeaks, squeals and banter of children, the pope said during a Mass in which he baptized 32 babies Sunday, the feast of the Baptism of the Lord.

"If they are hungry, mothers, let them eat, no worries, because here they are the main focus," he said.

One of the mothers, Emer McCarthy, an Irish journalist at Vatican Radio, told Catholic News Service that while most of the other mothers had brought baby bottles for feedings, she did not hesitate to breast-feed her daughter, Polly Rose, discreetly during appropriate moments during the ceremony.

She said she hoped the pope's encouragement would help overcome social taboos against breast-feeding in public.

"Who would have thought the pope would be this great proponent," she said.

The pope made a similar appeal in an interview with La Stampa newspaper Dec. 15. In a world where so many children go hungry, people must help them eat, he said.

He used the example of a young woman he saw at a Wednesday general audience whose child was crying desperately.

"I told her, 'Ma'am I think your baby is hungry.' And she replied, 'Yes, it would be time.' I replied, 'Well, please, feed him.' She was modest and didn't want to breast-feed him in public while the pope drove by," the pope said in the interview.

The pope's remarks "underline how natural it is, how motherhood and maternity are natural and have a place, even in church, even in the Sistine Chapel," McCarthy said.

Typically, the babies baptized by the pope at the annual liturgy are children of Vatican employees.

This year, Pope Francis also included one couple who do not work at the Vatican but had requested the pope baptize their second child.

The couple, Ivan Scardia and Nicoletta Franco, both work for the Italian military police in the central Italian town of Grosseto.

However, while they are Catholic, they were married civilly and not in the church, which caused a slight "glitch" when they had to send the requested paperwork to the Vatican, Scardia said.

"But they called me back right away and this problem, too, was taken care of," he told the Italian daily Corriere della Sera.

Scardia said they consider themselves to be believers and wanted their 7-month-old daughter to receive the sacrament of baptism.

One of the intentions read during the prayers of the faithful was for families and asked that "the Lord rekindle the sacramental grace of marriage and give (parents) the ability to teach their children in the faith."

In his homily, Pope Francis told the parents and godparents the faith was "the most beautiful inheritance they will leave" their children and that they had "the duty to hand down the faith."

Later, at the Angelus prayer with pilgrims gathered in St. Peter's Square, the pope again underlined his hopes that a child's baptism would serve as an impetus for his or her parents to live a Christian life more fully.

"I pray that the children's baptisms help these parents rediscover the beauty of faith and to return, in a new way, to the sacraments and the community" of the church, he said.

Pope to moms: It's OK to breast-feed in public, even in Sistine Chapel

Faith is passed on at home, pope tells parents at baptism

I or we? Vatican sparks baptism controversy that isn't so controversial

The Francis Effect podcast: Baptism, the Breonna Taylor settlement and Mass in Milwaukee