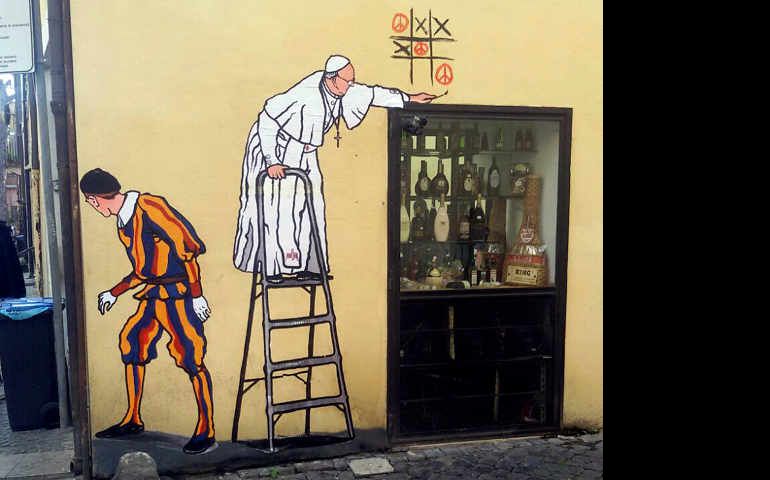 A graffiti depicting Pope Francis and a Swiss guard is seen in Borgo Pio, in Rome Oct. 19. (Reuters/stringer)

Rome — A larger-than-life mural showing Pope Francis as a sneaky graffiti artist painting peace signs on a wall near the Vatican was taken down by Rome's "decorum cops" on Wednesday just hours after it went up.

The mural showed the pope on a step ladder playing a game of tic-tac-toe by painting circular peace signs in place of zeros as a Swiss Guard in a billowing uniform acts as a lookout against witnesses or police.

Street artist Mauro Pallotta, who signs his work "Maupal", painted it on paper in his studio and pasted it up with glue and lacquer on a corner near the Vatican overnight.

Early Wednesday afternoon, a maroon van marked "Decorum Squad of the City of Rome" arrived carrying city sanitation workers, who blasted the artwork off the wall with high-pressure water sprays.

Local media have criticized the unit, ridiculed as "the decorum cops", for removing popular art while unsightly graffiti blights many buildings and heaps of garbage pile up on sidewalks because of a collection backlog.

Last year, the same squad took down another of Pallotta's creations in the same neighborhood. It showed Francis as the comic book hero Superman taking off into the air and carrying a black briefcase bearing the word “valores,” Spanish for values.

The 'lived religion' of street basketball