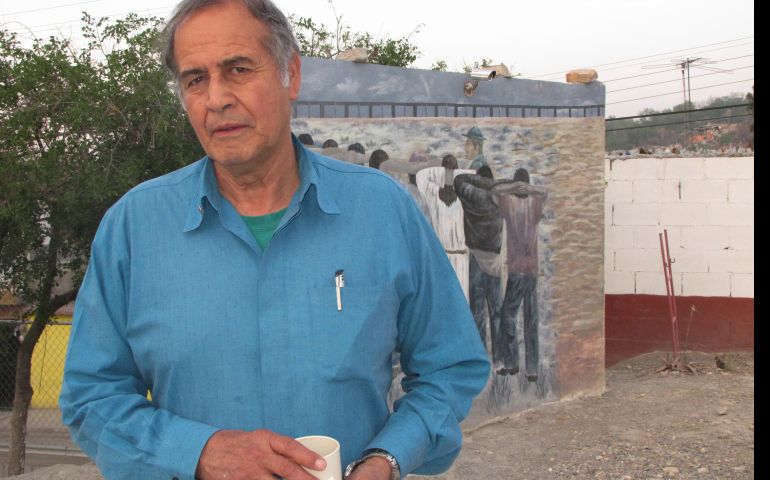 Fr. Pedro Pantoja stands outside the shelter he runs in 2011 in Saltillo, Mexico. (CNS/David Agren)

Mexico City — A network of church-run migrant shelters across northern Mexico has won the top award from the national anti-discrimination council for its efforts to protect people traveling through the country without the proper papers.

The National Council to Prevent Discrimination, an autonomous agency funded by the federal government, recognized the Network of Migrant Houses and Human Rights Centers of the Northern Zone, which was founded 15 years ago, "for its outstanding contributions in the field of defending the rights of migrant persons."

Mexico is "a state of victims and victimizers, (where) discrimination is one of the most savage faces that migrants confront," said Fr. Pedro Pantoja, former director of the Belen, Inn of the Migrant shelter in Saltillo, at the Feb. 6 award ceremony. "(It) exceeds the threshold of the inhumane, of the most vile and most terrible humiliations."

The network in 14 cities has not always proved popular with the authorities and, in recent years, organized crime and drug cartels, which commit crimes against migrants such as kidnapping, extortion and sexual assaults. Crimes against the undocumented are often committed with the complicity of crooked police and public officials -- something condemned by Father Pantoja, whose acceptance speech on behalf of the network mentioned several massacres of migrants and stories of victims being dismembered by kidnappers.

"The most obscene crimes happened at the hands of (immigration) officials, the authorities, security forces complicit with organized crime and organized crime itself," he said.

Migrants travel through Mexico in attempts to reach the United States. The dangers of the trip have increased over the past decade, forcing the shelters in the network to shift attention to keeping migrants safe, along with providing a place to sleep, eat and tend to tired feet.

At the shelter in Saltillo, 190 miles from the Texas border, director Alberto Xicotencatl says many migrants turn back because of fears of forging ahead into Tamaulipas state, where organized criminal groups kidnap frequently and security is scant.

Many Mexican migrants are deported into Tamaulipas, which borders Texas, leaving shelters to deal with the deluge. But many shelters, such as the one in Saltillo, report seeing far fewer guests -- 85 percent fewer, according to Xicotencatl -- as Central Americans no longer ride the rails in large numbers or arrive in large numbers due to an ongoing government operation to stop migration through southern Mexican states.

The Mexican government started the operation last summer in response to a surge in Central American children attempting to reach the United States and, it said, to improve security by keeping migrants off of freight trains.

"It's not about security," Xicotencatl said of the plan, which shelter operators suspect has sent migrants searching for alternative, but less-safe routes. "The plan is to detain and deport migrants."