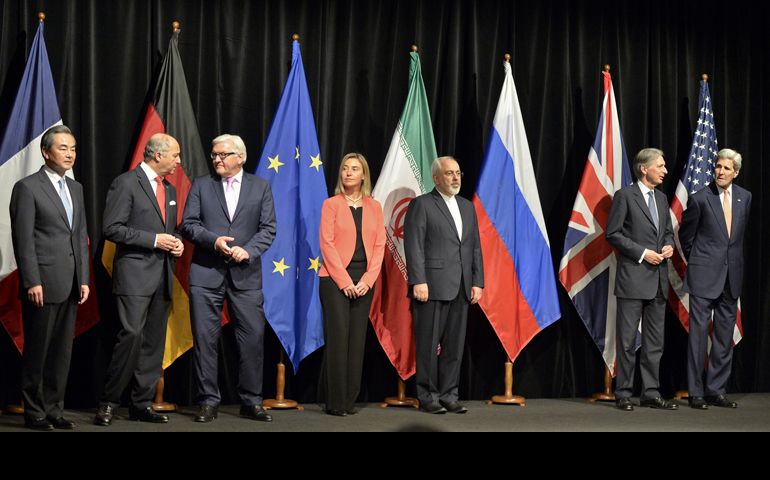 Committed to a negotiated settlement over the real possibility of armed conflict, six world powers and Iran have decided to give peace a chance.

With much patience, persistence and hard work over 20 months, the five permanent members of the U.N. Security Council -- China, France, Russia, the United Kingdom and the United States -- and Germany have reached a nuclear agreement with Iran that is nothing short of historic.

According to the respected Arms Control Association, "The agreement -- known as the Joint Comprehensive Plan of Action -- establishes a strong and effective formula for blocking all of the pathways by which Iran could acquire material for nuclear weapons and promptly detecting and deterring possible efforts by Iran to covertly pursue nuclear weapons in the future."

In a letter to members of Congress, Bishop Oscar Cantu of Las Cruces, N.M., chairman of the U.S. bishops' Committee on International Justice and Peace, quoted Pope Francis: "I express my hope that a definitive agreement may soon be reached between Iran and the P5+1 Group."

In his letter, Cantu added, "The United States and its international partners have taken a remarkable step with Iran in reaching this agreement. We encourage Congress to support these efforts to build bridges that foster peace and greater understanding. In the words of Pope Francis, may the negotiated framework 'be a definitive step toward a more [secure] and fraternal world.'"

But, unwisely, some members of Congress have signaled their opposition to the Joint Comprehensive Plan of Action.

While this agreement is not perfect -- very few agreements are -- it is a solid, good agreement for the United States and its negotiating partners, Iran, the Middle East and the world.

According to the Arms Control Association, "Some critics of this deal in the United States may still believe that by rejecting the agreement and increasing sanctions pressure on Iran, the United States can somehow coerce the leaders in Tehran to dismantle Iran's nuclear program or agree to better terms. That is a dangerous illusion. There is no better deal on the horizon."

The Arms Control Association said in its press release that the Joint Comprehensive Plan of Action will "establish long-term, verifiable restrictions on Iran's sensitive nuclear fuel cycle activities"; for example, the elimination of Iran's plutonium path to the bomb. And of equal importance: The International Atomic Energy Agency will be allowed to send international inspectors to check any Iranian facility of concern -- including military sites.

The Arms Control Association is concerned that if Congress blocks implementation of this hard-won, balanced and effective multilevel deal, the U.S. will have broken from its European allies and the necessary international support for Iran-related sanctions will be lost. Iran would then have the incentive to quickly and significantly expand its capacity to produce bomb-grade material.

Please urge your congressional delegation to fully support the Joint Comprehensive Plan of Action. The alternative to this accord is a likely nuclear arms race in the Middle East and probably war.

The Arms Control Association wisely puts it this way: "This is the time to seize -- not squander -- the chance to put in place an effective, long-term, verifiable deal that blocks Iran's pathways to nuclear weapons."

Q & A with Sr. Patricia McCormick, preaching peace for 50 years