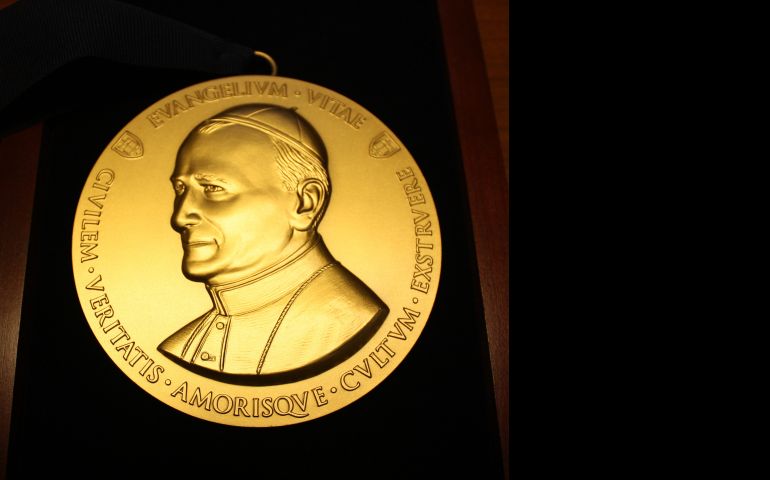 Inaugurated in 2011, the Evangelium Vitae medal is given annually by the University of Notre Dame Fund to Protect Human Life to an individual who steadfastly affirms and defends the sanctity of human life. (CNS)

While Pope Francis' new encyclical "Laudato Si', on Care of our Common Home" is enjoying wide publicity, few people are aware this year marks the 20th anniversary of another powerfully prophetic social justice and peace encyclical: Evangelium Vitae ("The Gospel of Life").

Trying to awaken the conscience of the world to reject the "culture of death" that creates "structures of sin," Pope John Paul II wrote in Evangelium Vitae: "And how can we fail to consider the violence against life done to millions of human beings, especially children, who are forced into poverty, malnutrition and hunger because of an unjust distribution of resources between peoples and between social classes?

"And what of the violence inherent not only in wars as such but in the scandalous arms trade, which spawns the many armed conflicts which stain our world with blood?

"What of the spreading of death caused by reckless tampering with the world's ecological balance, by the criminal spread of drugs, or by the promotion of certain kinds of sexual activity which, besides being morally unacceptable, also involve grave risks to life?"

John Paul continued, "We shall concentrate particular attention on another category of attacks, affecting life in its earliest and in its final stages. ... Abortion and euthanasia are thus crimes which no human law can claim to legitimize. There is no obligation in conscience to obey such laws; instead there is a grave and clear obligation to oppose them by conscientious objection."

Then John Paul tackled the death penalty. He said because of improvements in the penal system, the need to execute a dangerous criminal to defend society was not necessary. "Such cases are very rare, if not practically non-existent," he wrote.

Many Catholics, as well as many other Christians, hold inconsistent opinions regarding the protection of life.

Some condemn abortion but fail to oppose the mass murder of war, which mostly kills innocent people. Others work to protect the environment while promoting the murder of unborn children through abortion as a distorted means to control population.

But all life issues are morally and logically linked. It's what the Catholic church refers to as the "consistent ethic of life."

John Paul explains: "Where life is involved, the service of charity must be profoundly consistent. It cannot tolerate bias and discrimination, for human life is sacred and inviolable at every stage and in every situation; it is an indivisible good. We need then to 'show care' for all life and for the life of everyone."

"As disciples of Jesus, we are called to become neighbors to everyone (see Lk 10:29-37), and to show special favor to those who are poorest, most alone and most in need. In helping the hungry, the thirsty, the foreigner, the naked, the sick, the imprisoned -- as well as the child in the womb and the old person who is suffering or near death -- we have the opportunity to serve Jesus."

Quoting St. John Chrysostom, St. John Paul wrote, "Do you wish to honor the body of Christ? Do not neglect it when you find it naked. Do not do it homage here in the church with silk fabrics only to neglect it outside where it suffers cold and nakedness."

"What is urgently called for is a general mobilization of consciences and a united ethical effort to activate a great campaign in support of life. ... The purpose of the Gospel, in fact, is to transform humanity from within and to make it new."

Pope Francis takes a dim view of the death penalty, but not all Catholics are convinced