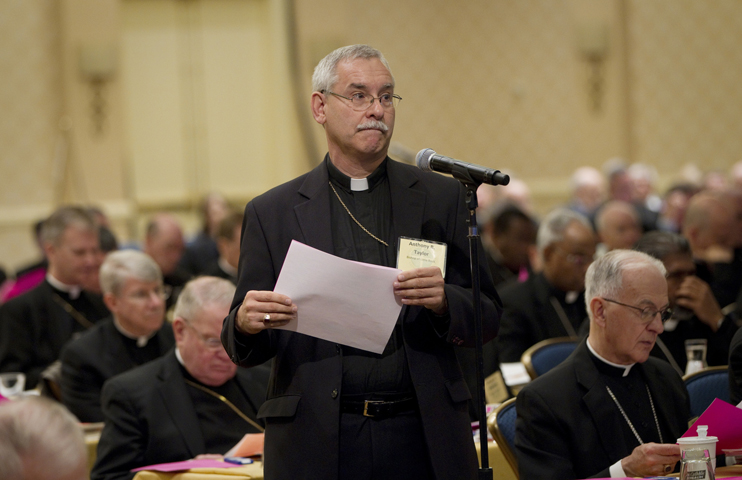 During the recent U.S. Catholic bishops' fall assembly in Baltimore, several bishops and one abbot, decided to skip dinner at the downtown Marriott Waterfront hotel, and walked several blocks to an inner city parish to share a simple meal with about 30 peace activists -- myself included.

Highlighting the discussion were three speakers who shared with us deeply personal testimonies regarding Christian conscience formation, war and conscientious objection.

Daniel Baker, explained that after the 9/11 terrorist attacks he believed that he had to do something. He came to what he thought was the obvious conclusion: "join the military, fight in war, and kill the enemy."

He joined the U.S. Navy and started to see "from first-hand experience the military outside of the movies." He told us it started to become less clear how killing would really be helping others. "My expectations unraveled fast."

Baker said he started reading the Gospel, and that most of what Jesus taught took him by surprise; his words and actions against violence are "radical and demanding."

And I would add that a serious, honest reading of Jesus' radical and demanding teachings against violence should take all of us by surprise. For Jesus' teachings were, and remain, extremely countercultural. "For my thoughts are not your thoughts, nor are your ways my ways," says the Lord (Isaiah 55:8).

During 2006, Baker said while flying in a reconnaissance mission over the Persian Gulf in a plane designed to carry bombs and torpedoes, he and his crew member were tracking an Iranian submarine.

After making radio contact, one of the submariners said, "Coalition aircraft, maintain five nautical miles, or we will take defensive action." But Baker said as his plane continued to make passes over the submarine, the voice of the Iranian submariner was sounding more and more nervous.

Baker reflected, "As I listened to the trembling voice, I began to realize that it was a flesh-and-blood man in the submarine down there. And that blip on our sonar screens represented an entire crew of human beings; they were sons, brothers, husbands.

"Gradually, I became firmer in my conviction against war," said Baker. With the help of the Catholic Peace Fellowship he applied for conscientious objector status. And after seven months he was honorably discharged.

Seminarian Daniel Baker is now on his way to becoming a Catholic priest.

Raquel Falk shared with us that after spending five years in a special youth military program designed to build leadership skills, she realized that trip to the firing range, obstacle course and the hand-to-hand combat sessions had the hidden objective to teach her to kill efficiently and without reflection.

This led to her declining an invitation to the U.S. Naval Academy. Falk said the honor churches and schools give to the military, like the display of the American flags in our church sanctuaries, sends a pro-military message to our youth.

"I find myself wondering how the church can show the youth of our militarized nation that their desire for self-sacrifice can best be found in the cross of our Lord."

Kristi Casteel, the mother of the late Joshua Casteel,  started by saying, "Tonight I am going to simply share Joshua's story in the hope that it will reveal the significance of conscience development and what is possible in our lives when we are alive and responsive to our conscience."

She said, "War will always exist where love is absent. This is what Joshua came to understand in the twists and turns of his life. His story could be entitled 'An Unexpected Journey.' "

And we could surely add this has been the life-title of many a saint.

Casteel explained that Joshua joined the early enlistment program to prepare him for West Point. However, the program's violent chants about killing without mercy didn't quite sit right with all he had learned about Jesus.

And the "reflexive training" the military uses to short-circuit man's resistance to killing also seemed wrong to Joshua.

He resigned from West Point, but later, in light of 9/11, he reenlisted as a non-commissioned Arabic-trained interrogator and was ordered to Iraq.

Casteel further explained, "The real world of war, however, with its chaos, inconsistencies and known torture in the field -- causing his fellow soldiers to unravel emotionally, hit Joshua like a punch in the gut."

Aware of his deep religious convictions, he was called "priest" by many of the soldiers. Many shared their struggles with him.

The contrived atmosphere of expressed hatred by superior officers towards the detainees did not set well with Joshua.

Casteel said, "Joshua knew that most detainees were simply fathers, imams, and young men caught up in sweeps by American soldiers or were men turned in by fellow Iraqis in an attempt to earn money from the coalition."

In a later taped explanation, Joshua Casteel revealed that during the interrogation of a young, very calm jihadist detainee, he was morally confronted by the detainee who called him a very strange man. He said to Joshua, "You call yourself a Christian, but you do not follow the teachings of Christ, who said you are to love your enemies, to pray for those who persecute you, to turn the other cheek."

Joshua said he thought to himself, now this is an ironic moment: Here you are sitting across the table from a declared jihadist who is giving you a lesson about the Sermon on the Mount.

Kristi Casteel said that her son Joshua shared with the jihadist that he agreed that he wasn't following those nonviolent teachings of Christ. And that in military uniform 'he was not free to live as he believed he should as a Christian."

You can see and hear Joshua Casteel tell this powerful and inspiring story here.

Bishop Anthony Taylor of the Diocese of Little Rock, Ark., shared with us his dismay regarding the growing political mode to deny refugee status to all Syrian who are fleeing for their lives.

Speaking for his diocese, he said, "We will accept Syrian refugees!"

In solidarity with our persecuted Syrian brothers and sisters you can go to the Maryknoll Office for Global Concerns website for Syria by clicking here to send a letter to your governor and congressional delegation.

Kristi Casteel said that during her son's interrogation -- which turned into a conversation -- with the jihadist detainee, Joshua said to him that there were other ways to deal with conflict than the way they had both chosen. And he asked him to consider what it might look like in different circumstances for them to meet and talk -- learning about each other’s lives and beliefs with the potential of bringing about mutual trust.

Kristi said her son left the interrogation room "a changed man, but more importantly a free man, on the inside where it counts."