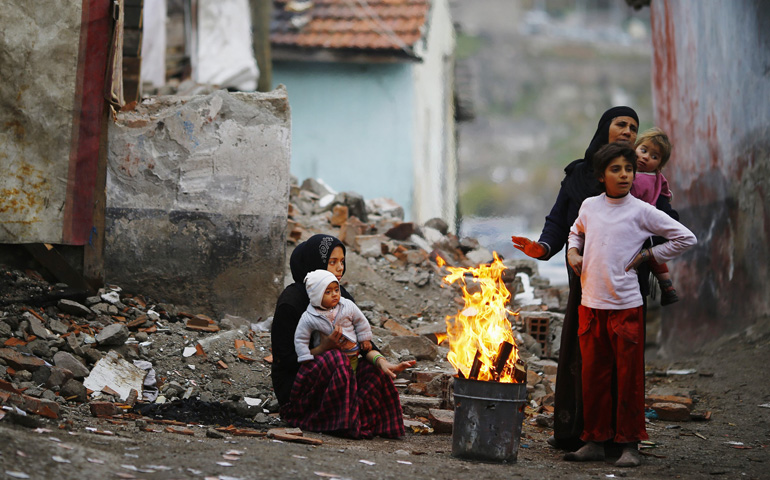 Syrian refugees warm themselves around a fire Dec. 3 in Ankara, Turkey. (CNS/Reuters/Umit Bektas)

For two weeks, these poor, battered fellow human beings who had fled the misery of civil war and the barbarism of the Islamic State group were told there was no money available for food. Children, women and men went hungry.

The WFP had been providing food assistance for the Syrian refugees living in the host countries of Jordan, Lebanon, Turkey, Iraq and Egypt. However, on Dec. 1, the WFP reported that it had run out of money to fund its electronic voucher program for 1the refugees because many donor nation commitments were not being fulfilled.

But 10 days later, the WFP announced that following an unprecedented social media campaign, donors had given over $80 million, allowing reinstatement of food assistance to the Syrian refugees for the rest of December. And this funding will also allow the WFP to meet some of the refugee needs in January.

According to the WFP, Syrian refugees in camps throughout the region are ill-prepared for the harsh winter, especially in Lebanon and Jordan, where many children are barefoot and without proper clothing. Many tents are drenched in mud, and hygiene conditions are worsening.

The CBS news program "60 Minutes" produced a highly informative and compelling segment on this crisis titled "War and Hunger."

In addition to the Syrian region, the WFP and other international aid agencies like Catholic Relief Services are desperately trying to respond to four other simultaneous "Level 3 emergencies" -- the U.N.'s most serious crisis designation -- in Iraq, South Sudan, Central African Republic and the African nations plagued by the Ebola outbreak.

According Eric Mitchell, director of government of relations for Bread for the World, an anti-poverty Christian lobbying organization, the U.S. government needs to fully fund the Food for Peace program. He said Congress has authorized $2.5 billion, but the budget for fiscal year 2015 actually only funds the program at $1.4 billion.

Mitchell added that Congress should allot significantly more money for food vouchers that can be immediately used in local markets instead of the more expensive and time-consuming transfer of food on cargo ships.

As a Christmas gift to desperately hungry people, please email and call your congressional delegation (Capitol switchboard: 202-224-3121) and urge them to work for the improvements listed above.

CRS, the aid and development arm of the U.S. Catholic bishops, has been supporting Caritas Jordan and Caritas Lebanon with their work with Syrian refugees, providing assistance with housing, food and other basic necessities.

As part of the Christmas season celebration, many of us will partake in the blessings of bountiful meals. And as we enjoy the good food set before us, may we have the special gift of knowing that we helped make it possible for some of our hungry brothers and sisters to eat during the Christmas season.

But what about after the Christmas season? What will happen to the 805 million hungry brothers and sisters of ours then?

Will they be forgotten until World Food Day or next Christmas? Will they even be alive?

What we do, or fail to do, to help answer these life-and-death questions will significantly determine how seriously, how faithfully, we take the birth of Jesus -- Emmanuel, "God with us."