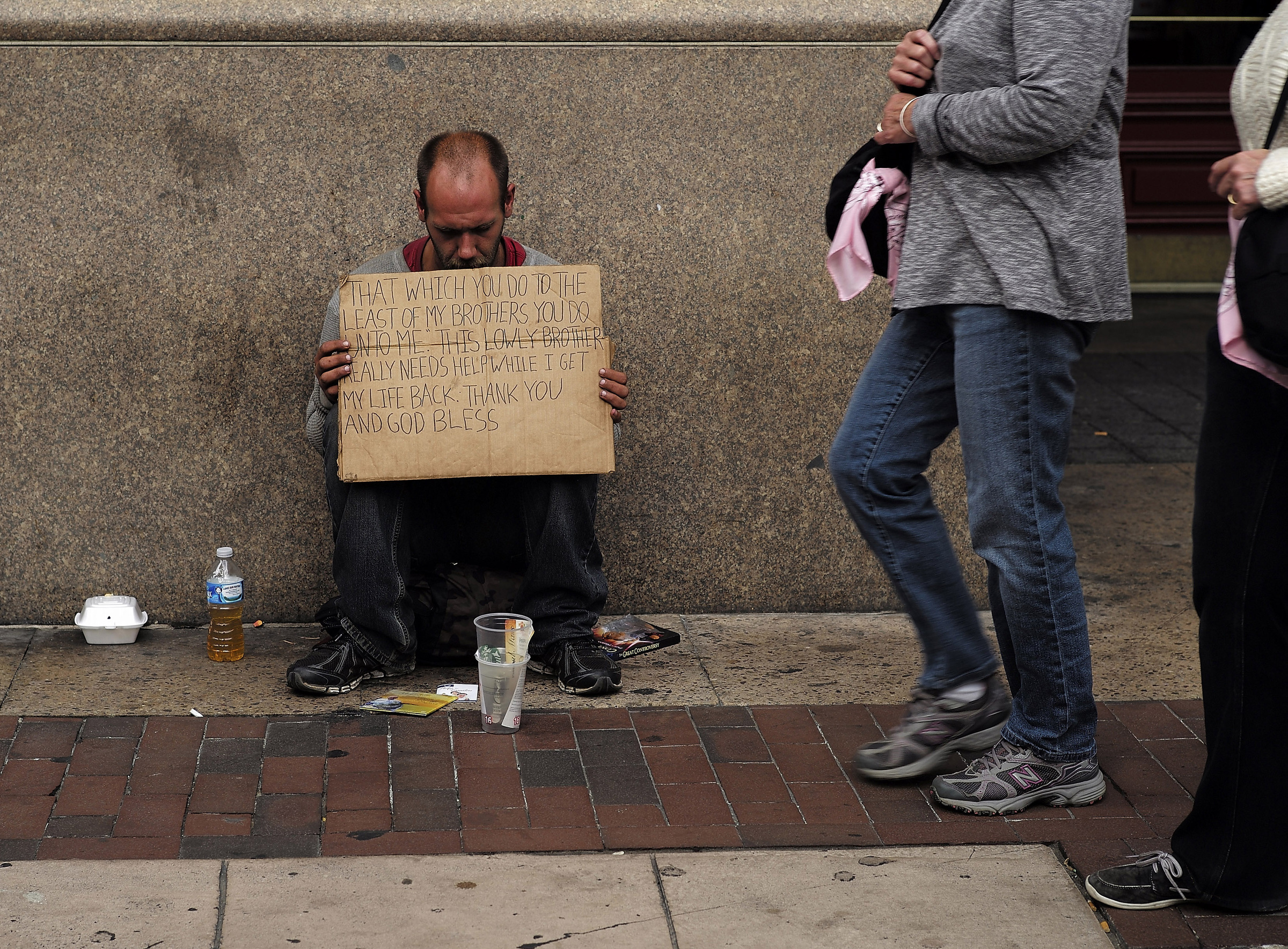 In his strong identification with the poor and vulnerable, Jesus makes it perfectly clear that when we meet the needs of these least brothers and sisters, we are ultimately serving him. And when we -- as individuals, churches, states and nations -- do not adequately meet the needs of the downtrodden, we have failed to do good to Jesus (Matthew 25:31-46).

With so many countless fellow human beings needlessly suffering, Jesus' own suffering continues on to this very day -- in them and with them.

The First Station of the Cross: Jesus is homeless.

Hundreds of thousands of women, men and children in the U.S. have no place to call home. Often exposed to the harsh elements, they are literally living on our streets. We often see them, and yet we fail to see Jesus in them.

The Second Station of the Cross: Jesus is a stranger and not welcomed.

Tens of thousands of children fleeing to the U.S. from Central American drug gangs are being deported back to the violence. Millions of undocumented U.S. workers denied legal protection are forced to live in the shadows of society.

And millions of other human beings running for their lives from terrorists' death threats are often confined to inhumane refugee camps. We fail to see Jesus in them.

The Third Station of the Cross: Jesus is poor.

More than 895 million fellow human beings throughout the world barely exist in extreme poverty, struggling to survive without adequate and safe water, food, sanitation, health care, education, employment and housing. We are not fully committed to quickly meeting their needs. We fail to see Jesus in them.

The Fourth Station of the Cross: Jesus is aborted.

Millions of unborn human beings, erroneously classified by abortion proponents as "parts of a woman's body," or "blobs of protoplasm," or simply "products of conception," are murdered by means of legalized abortion in many countries throughout the world.

Like other vulnerable people, the unborn are often victims of what Pope Francis calls a "throwaway culture." We fail to see Jesus in them.

The Fifth Station of the Cross: Jesus is euthanized.

Growing numbers of people who are cruelly seen as a burden -- often due to serious illness -- are persuaded to take their own lives with the assistance of a physician (physician-assisted suicide). Instead of providing adequate psychiatric, palliative and hospice care, society is increasingly choosing this more subtle form of euthanasia to kill various people who are hurting. We fail to see Jesus in them.

The Sixth Station of the Cross: Jesus is brutalized by war.

In more than two dozen countries, wars and armed conflicts are destroying virtually everyone and everything in their path. So-called developed nations like the U.S., the U.K. and Israel are fueling these bloody conflicts through arms sales and weapon grants. Countless war-torn innocent children, women and men continue to be maimed and murdered. We fail to see Jesus in them.

In Catholic tradition, there are 14 Stations of the Cross. I have listed here six modern versions of them. But sadly, many more could easily be added, for suffering throughout our endangered, fragile planet is monumental.

Jesus is urgently calling us to see him in our suffering brothers and sisters.

Lent is the perfect time for individuals and nations to begin fasting from what Francis calls a "globalization of indifference," and to begin feasting in the ways of Jesus: nonviolence, forgiveness, solidarity, social justice, and active, compassionate love for all those who suffer.