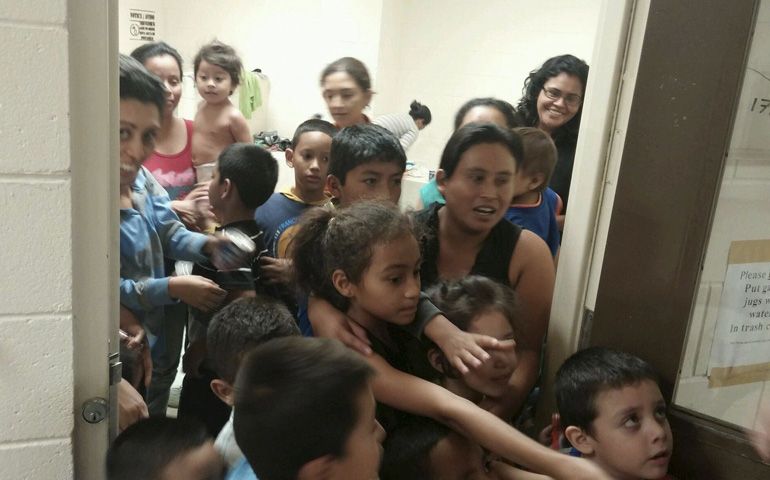 Tens of thousands of children fleeing desperate conditions have entered the United States asking for help. And many more are coming. What kind of welcome is being offered to them? The answer to that question is still largely undetermined.

According to Human Rights Watch, the U.S. government predicts that 90,000 unaccompanied migrant children will cross the U.S.-Mexico border in fiscal year 2014, more than 10 times the number who crossed in 2011. And thousands of other children have crossed with a parent, also an increase from previous years.

Reportedly, more than 90 percent of these children are from Honduras, Guatemala and El Salvador, where pervasive poverty and drug and gang violence have made their lives dangerous and miserable.

It is said that drugs go north and guns and money go south. Therefore, it is essential in the United States that adequate treatment for addiction replace jail time for nonviolent drug users; that all loopholes in gun export laws be closed; that serious gun-control laws, such as a total ban on all assault weapons, be passed; and that greatly increased U.S. aid to these Central American nations for schools, job creation through clean industry and agricultural development, infrastructure and fair trade practices become realities.

According to Barbara Briggs, associate director of the Institute for Global Labour and Human Rights, these "free trade" agreements in many cases greatly boost American corporate profits while undercutting poor workers, domestic industries, and agriculture south of the U.S. border.

Under NAFTA and CAFTA, U.S. companies are often building factories where they are permitted to pay the cheapest wages and lowest benefits to poor workers. These U.S. corporate injustices are in many cases contributing factors driving Latin Americans -- adults and children -- to seek fairer working and living conditions in the United States, Briggs said.

While addressing the root causes of unaccompanied migrant children is essential, we need to also kindly address the immediate needs of these young brothers and sisters.

Instead of viewing these children as criminals who are illegally entering the United States, a totally humanitarian, Christlike response is needed.

They wrote: "The administration's recent statements have placed far greater emphasis on deterrence of migration than on the importance of protection of children seeking safety."

Please urge President Obama and your congressional delegation to ensure that these children get all the help they need. Sign up to receive legislative alerts from the bishops' campaign for immigrants by going to www.justiceforimmigrants.org.

Responding to unaccompanied migrant children seeking asylum in the United States, Pope Francis recently wrote, "This humanitarian emergency requires ... these children be welcomed and protected" and that policies be adopted to "promote development in their countries of origin. ...

"A change of attitude towards migrants and refugees is needed ... moving away from attitudes of defensiveness and fear, indifference and marginalization – all typical of a throwaway culture – towards attitudes based on a culture of encounter, the only culture capable of building a better, more just and fraternal world."

Pope calls for 'globalization of charity' to protect migrants

Cardinal calls for resettlement of asylum-seekers from Greek island