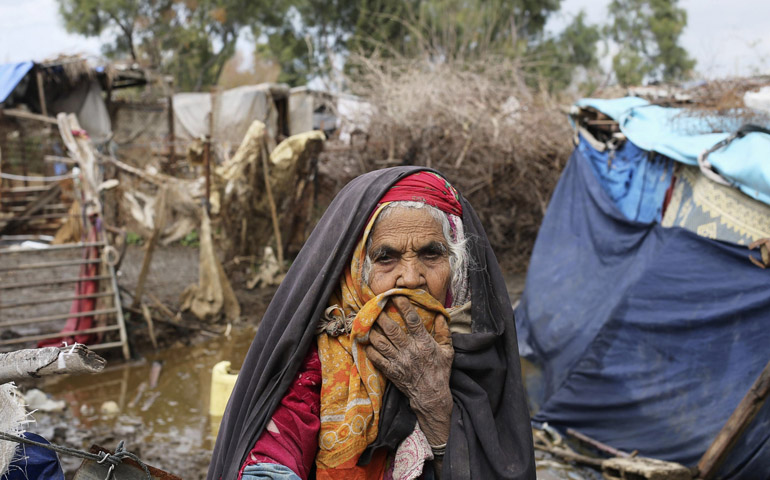 A Palestinian woman stands outside her dwelling Feb. 20 in the village of Al-Moghraga, Gaza Strip. (CNS/Reuters/Ibraheem Abu Mustafa)

As the minds and hearts of Christians throughout the world focus on the suffering, death and resurrection of our Lord Jesus, we naturally think of the Holy Land.

Throughout much of history, instead of experiencing love in the land where the world's savior taught human beings to love one another as he loved us, Palestinians have often experienced the great pain and suffering of injustice, war and foreign occupation.

And today, the story is sadly much the same.

In the occupied territories of the West Bank in Palestine, Israeli government and military oppression is very real yet underreported by corporate-owned U.S. media sources.

According to B'Tselem, an Israeli human rights organization made up of academics, attorneys and members of the Israeli parliament (Knesset), tens of thousands of hectares of the West Bank, including farm and pasture land, has been seized from Palestinians by Israel. Hundreds of thousands of Israelis live in the more than 200 Jewish settlements and settlement outposts established in the Palestinian West Bank.

The Palestinian West Bank came under Israeli control as a result of its conquest during the 1967 Arab-Israeli War. Because of the Israeli settlements, much of it for all practical purposes has become a permanent part of Israel in violation of international law according to the International Court of Justice.

The same court ruled that the Israeli separation barrier of walls, barbed wire and trenches in the West Bank is also illegal. This barrier -- built overwhelmingly in occupied territory -- effectively takes more land away from the Palestinians and prevents many Palestinians from normal access to their vineyards, olive groves and fields.

A friend of mine, Dusty Tyukody, participated in an educational trip to the West Bank sponsored by Friends of Sabeel North America, an ecumenical Christian peace organization. She emailed me a photo she took that shows Palestinians herded like cattle into a narrow passageway, where they stood for a long period while waiting to pass through an Israeli checkpoint in the West Bank city of Hebron.

Another injustice, according to B'Tselem: "Whereas Israelis [living in the West Bank] enjoy an unlimited supply of running water all year round, Palestinians are allotted a small fixed amount, resulting in constant water shortages."

In many ways, the situation in Gaza is even worse. With an Israeli land and naval blockade in place, Gaza is known as the world's largest outdoor prison.

And last year's Israeli military offensive against the militant group Hamas in Gaza resulted in the deaths of 1,462 civilians, including 495 children, according to the United Nations. This offensive also leveled much of Gaza, leaving many with little to no water, food, or habitable shelter.

While Hamas has been immorally responsible for firing rockets indiscriminately from Gaza into Israel, the collective punishment of the entire Gaza population by Israel is totally unjust and gravely immoral.

The U.S. annually gives Israel approximately $3 billion -- mostly for military aid -- with virtually no conditions. Instead, the U.S. should demand Israel end all injustices toward the Palestinian people and commit to a timetable toward the finalization of a viable, independent Palestinian nation and a secure Israel.

If you are looking for a way to help end the Israeli occupation, you can visit the website of the US Campaign to End the Israeli Occupation or the Holy Land Principles* to find information and ideas about advocacy.

Also, check out the websites of Catholic Near East Welfare Association and Catholic Relief Services to learn how you can assist our suffering Palestinian brothers and sisters.

At the conclusion of Pope Emeritus Benedict XVI's pilgrimage to the Holy Land in 2009, he said: "Let it be universally recognized that the State of Israel has the right to exist, and to enjoy peace and security within internationally agreed borders. Let it be likewise acknowledged that the Palestinian people have a right to a sovereign independent homeland, to live with dignity and to travel freely. Let the two-state solution become a reality, not remain a dream."

[Tony Magliano is an internationally syndicated social justice and peace columnist. He will be the keynote speaker at Our Lady of Fatima Catholic Church's May 2 social awareness seminar in San Clemente, Calif. He is available to speak at diocesan or parish gatherings about Catholic social teaching. His keynote address, "Advancing the Kingdom of God in the 21st Century," has been well received by diocesan gatherings from Salt Lake City to Baltimore. Tony can be reached at tmag@zoominternet.net.]

*Correction: Because of an editing error, the reference and link to the Holy Land Principles were deleted from this article when it was originally posted.