Healed and drafted into a cosmic battle 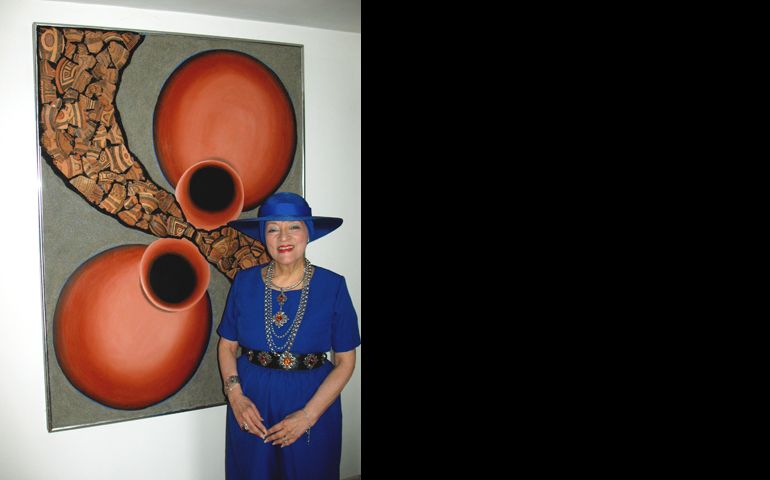 We're accustomed to seeing the saints with their attributes (signifying characteristics) depicted in paintings and stained glass. But do you ever wonder how they would respond to the images?

Peter of Verona -- who is almost always shown with a hatchet protruding from his skull -- might protest, "I had a life before my death."

Would Lucy, shown a picture of herself carrying her own eyeballs on a tray, look away?

Would some of the martyrs shown stalwart before boilings and poisonings and burnings tell us, "I was scared. And I wondered how God could allow this to happen"?

We don't know, of course, since the saints themselves don't get a vote. They've gone on to glory, where, one hopes, there are no mirrors or dressing rooms or cameras, because the reality, and not the image or impression, is the issue.

But for the people who have been healed by the intercession of a saint there is no relief from portrayals of one sort of or another. They are often known only by their diseases or disabilities, long after the healing takes place. They are often known by their connection to the saint, even if they have equally strong connections to marathon running or fixing cars or writing poetry or raising children.

Consider two different people, a woman and a man, both helped by holy figures, a man and a woman, long dead, whose causes for canonization are before the Vatican.

The woman, artist Sheila Lichacz, is an eager participant in the movement to have Blessed Junipero Serra named a saint. Perhaps it has to do with age, or agency. Lichacz was 21, a newly arrived Panamanian student of Spanish-Indian descent come to Texas for college, when her initial malignant brain tumor was diagnosed. After hearing that she was dying and that the tumor would kill her, she had the first of what would turn out to be 15 operations. That was 50 years ago.

She was in her late 30s when, on a visit to Mission San Juan Capistrano, she placed her hand on the feet of a statue of Fr. Serra and prayed, "Do something. I'm dying."

Lichacz wasn't healed. Today, she still has four tumors in her brain and one-third of her skull is acrylic. Another surgery is impossible. But she is alive and happily married and her neurological functions are normal, a state her many doctors and surgeons can neither explain nor understand. She paints and sculpts and travels and spreads the word about Serra. She believes she has been spared to help his cause. She believes her continued sufferings are a sharing in the sufferings of Christ.

Dave Wiley (whose name and identifying details have been changed at his request) was only 4 when he was suddenly, completely healed in early 1999. The day of his healing began like every day for the past six months, days when he wasn't in the hospital for tests or in one doctor's office after another: Wiley lying quietly on the couch, lethargic, running a fever and unable to keep down any solid foods. The doctors had originally diagnosed a rotavirus. They assured Wiley's parents it would be done in two weeks. But it was not done, and Wiley was rapidly losing weight, and the doctors were mystified and troubled.

His mother recalls that, without warning, he got off the couch and began playing, she says, "Like a normal, happy boy."

She said, "Davey, what happened?"

He answered, "Jesus healed me," and went back to his Legos.

Wiley remembers none of it, not the illness and not the healing. His mother cannot forget. It was she who asked for prayers. She who asked members of a religious community to pray that their founder would intercede for Wiley.

She knows what she experienced and what she saw. It was a miraculous healing.

But Wiley, a young man who works in a surfboard shop on the California coast building and repairing boards, isn't sure of what happened when he was 4, because he doesn't recall any of it. He is sure of this: He hates the attention his story brings. He does not tell co-workers about his past. Few friends know about the miracle. They know his skill on the water and in the shop. They know his favorite bands and books and movies. They know what he has worked to cultivate, what he has chosen.

Wiley is grateful to be alive, grateful to be strong and well -- which he has been since the day of his healing -- but he does not wish to be known, either by his illness or by a single moment in his childhood. He will attend the beatification of the saint whose prayers are credited with his cure and he will show respect and gratitude. But he will hurry home from the proceedings, hoping to avoid every reporter and every ecclesiastical official who would turn him into some kind of poster boy.

The whole affair seems distant somehow. A bit like Job, who is drafted into a cosmic battle he neither sought nor understood, Wiley did not know he was ill and he did not ask to be healed. Age and agency: He had neither and so, perhaps, feels he must work hard to claim them now.

When I strut down the street, I could hear its heartbeat.
The sisters fell back and said, "Don't that man look pretty."

Not a miracle? Close enough for Dave Wiley, but not even close for Sheila Lichacz.

[Melissa Musick Nussbaum is an NCR columnist who lives in Colorado Springs, Colo. You can follow her daily at thecatholiccatalogue.com.]

Editor's note: We can send you an email alert every time Melissa Musick Nussbaum's column, "My Table is Spread," is posted. Go to this page and follow directions: Email alert sign-up.

Healed and drafted into a cosmic battle