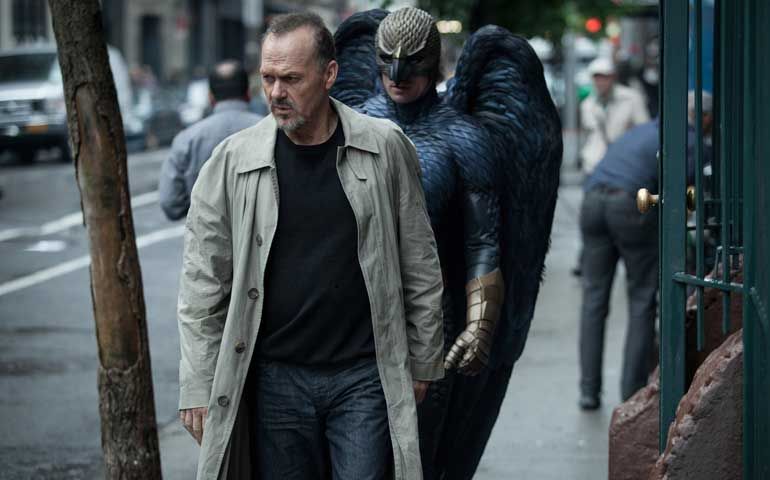 Michael Keaton in a scene from "Birdman" (CNS/Twentieth Century Fox)

The U.S. film industry's celebration of self at the 87th Academy Awards takes place on Sunday and there are many good films and some great, if not, outstanding, performances up for recognition.

For the most part, the films nominated for Best Picture are not box office successes, "American Sniper" being the exception. And while everyone bemoans the fact that no African-Americans have been nominated in the acting and directing categories, all eight films are stories centered on men -- and, except for "Selma," they are about white men. While I advocate for the best films and performances, the U.S. film industry has a vision problem in the films it chooses to make and to award.

I don't know the inner workings of the Academy of Motion Picture Arts and Sciences, the organization that bestows the Oscars, but I doubt groups got together and voted in one way or the other intentionally. Worse yet is if they vote this way automatically, without thinking -- that their votes default to white guys without asking themselves the race or gender question.

Frankly, I wonder how many academy members actually watch all the films that are sent to them for nomination and then actually win the Oscars. Do they vote for friends or based on sympathy? Or vote for one because they don't like the other? I still can't get over Joaquin Phoenix being passed over for a Best Actor award for his performance as Johnny Cash in 2005's "Walk the Line," but then the film wasn't even nominated for Best Picture. Go figure.

Join me on a walk through this year's Oscar lineup in alphabetical order.

"American Sniper" is the emotionally crushing biopic of Navy SEAL Chris Kyle, exceedingly well played by a buffed-up Bradley Cooper. Kyle was known for having more kills than any other sniper in U.S. military history. Kyle says in the film that he can stand by his kills before God because he was protecting people. But if he was a hero, it was in a fake, pretend, constructed war that never had to be. This is the tragedy of Kyle's story and of every veteran who has suffered or died since Vietnam.

The film is based on Kyle's book American Sniper, and director Clint Eastwood decided to skip over anything in it that would have detracted from his hero (like the part where Kyle said he punched Jesse Ventura in the face and it never happened). There has to be another way to sacrifice for "God, country and family" than killing people, whether it's artificially legitimized or not.

"Birdman" is billed as a comedy and is a self-conscious play within a play, or film rather. It's a very long, single inside industry joke about a washed-up actor (Michael Keaton) trying to make a comeback but yoked by fear. The ending, however, puts this claustrophobic, nonstop midlife crisis erupting in a Broadway theater in a bit of fantastical perspective.

"Boyhood" is filmmaker Richard Linklater's odyssey that follows a boy, Mason (Ellar Coltrane), growing up with his sister Samantha (Lorelei Linklater) and mother, Olivia (Patricia Arquette), in Texas literally over the span of 12 years. Their dad, Mason Sr. (Ethan Hawke), shows up and eventually regrets that he never married Olivia. Life gets complicated when Olivia does get married (twice) and they move, and move, and move.

Here's the thing about Linklater's films: They are all very verbal. Everyone's saying so much it is hard to get a sense of a character's inner worlds. When Hawke shows up in the narrative, any hope you had for a moment of silence is gone. As an experiment, the film worked, but is it a great film? Not for me.

Speaking of experiments, "The Grand Budapest Hotel" is a bizarre test of what a filmmaker can get away with in comedy on one hand, and a throwback caper-esque humor of a long ago era on the other. Wes Anderson directed this colorful tale about a lobby boy, Zero (Tony Revolori), in training at a stately hotel in the Republic of Zubrowka. M. Gustave (Ralph Fiennes) trains Zero and is the soul of discretion, respect and courtesy to the guests in a world between the two world wars -- and he's also a madcap thief and liar. No one can accuse this unique film as being derivative. Would I see it again? No.

My No. 1 favorite film of the year is "The Imitation Game," which is about Alan Turing (Benedict Cumberbatch), a gay mathematician, cryptologist and early computer engineer who with his team broke the Nazi Enigma code. The film weaves Turing's early story with the present. What happens to him after his team's prodigious accomplishments, which the film says saved 18 million lives and shortened the war by two years, helps us understand what it means to be human, regardless of race, gender, religion, politics and sexual orientation. Cumberbatch is brilliant. Yes, I would see this film again.

"Selma" is the only film in the Best Film category that is directed by a woman, an African-American woman, Ava DuVernay. Despite criticisms of some of DuVernay's creative choices about President Lyndon B. Johnson's interaction with the voting rights march led by Dr. Martin Luther King Jr. (an absolutely brilliant David Oyelowo), the films shows the sacrifices that so many people made so that every citizen in the United States can vote without harassment. Another film I would gladly see again.

"The Theory of Everything" is a love story about British scientist Stephen Hawking (Eddie Redmayne) and his wife Jane (Felicity Jones). Redmayne exceeds as a man who defies the odds to live with ALS for decades and to continue to work on his "elegant theory of everything." If I just look at Redmayne's performance, he gets very high marks. But the story, overall, is not yet finished, and at the end, I was a little sad. Not on my "see again" list.

"Whiplash" was a surprise for me. I went into see it knowing only that it was about music and that J.K. Simmons was starring in it. Andrew Neiman (Miles Teller) is a gifted drummer and is accepted into an elite jazz ensemble by Terence Fletcher (Simmons).

Andrew is so ambitious and anxious to please Fletcher that he drums until his fingers bleed. Fletcher is cruel, exacting physical dedication and musical perfection from the ensemble, but it is Andrew on whom he heaps emotional abuse that would devastate anyone else. The ending will surprise you and offers much to talk about in relationships between flawed human beings. Incredible performances, but admirable rather than enjoyable.

I have seen 22 of the 26 feature films nominated overall, and space prevents me from detailing the rest of those films. I want to give special mention to Steve Carrell and Mark Ruffalo in "Foxcatcher," based on a true story. It is a study in the devastating consequences of what happens when unchecked mental illness and ambition clash.

"Gone Girl" (I disliked the book intensely) is "Fatal Attraction" for the 21st century; if you've seen "Fatal Attraction," you'll know what I mean. One main character is insane and the other is crazy for making bad choices -- and no one is likable.

I appreciate the idea of "Wild" more than the movie -- taking a 1,000-mile hike to find oneself and regain the values her mother taught her. Reese Witherspoon is good, but the writing was not able to make me care enough about her broken situation; it didn't grab me. Laura Dern, as her mother shown in flashbacks, is excellent as always.

Finally, I want to mention Robert Duvall's performance in "The Judge." Robert Downey Jr. is always Robert Downey Jr. and highly watchable in any role, but here Duvall plays a judge convicted of a hit-and-run incident where a man he had once shown mercy to is killed. Downey is his lawyer son. There's one scene where Duvall makes himself so vulnerable that based on this alone he deserves an Oscar.

Of these films I would give "The Imitation Game," "Selma" and "The Judge" human dignity awards for telling stories about people, real or imaginary, that make us care about what it means to be members of the human family and to walk, even cross, the line for social change.

Meanwhile, we are hosting a potluck party to celebrate these films on award night. Ballots will be passed out ahead of time and first-, second- and third-place winners will be given a prize each in keeping with the spirit of cinematic storytelling. The conundrum is: Do you vote for the film or actor or writer you think should win or do you try to outguess the Academy? It is a question without an answer.

Why do people think differently from you about religion?