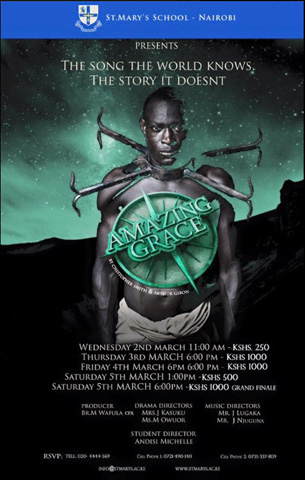 Thanks to Christopher Smith, "Amazing Grace," John Newton's 18th century hymn of redemption, is now part of the canon of Broadway show tunes. Smith is the creator of the musical by the same name that ran on Broadway last year and is being prepared for a North American tour.

With cast and crew members, he gathered Monday in the downstairs party room of a bar in midtown Manhattan to celebrate the release of the original cast recording.

"I was hearing things I never heard before in the big theatre," Smith said of the recording, which was co-produced and engineered by six-time Grammy Award winner Frank Filipetti and co-produced and arranged by Joseph Church for DMI Soundtracks. "It's a different sound from a lot of Broadway albums now, more old school and romantic."

Smith was a policeman in Bucks County, Pa., with no musical theatre training -- he didn't even know how to read music -- when he happened upon a young adults' book about Newton's journey from slave trader to Anglican priest and abolitionist. Feeling a call to dramatize such a powerful story, Smith pursued this quest for 17 years, writing the music, lyrics and, with Arthur Giron, most of the show's book.

The musical opened in Chicago in 2014 to mixed-to-good reviews before moving to Broadway last year where critics were less enthusiastic. It closed after four months, but Smith sees a bright future not just in the national tour, the details of which are not available yet, but in colleges and universities around the world. The musical is set to have its first international (and first post-Broadway) production this month in Nairobi, Kenya, at St. Mary's International School.

"It feels so right to have this story have its first student production in Africa," Smith said.

Laiona Michelle, who played servant Nanna on Broadway, will work with the students and Smith says tribal chiefs from around Nairobi will be attending.

"They've never met anybody from Broadway," he said, adding that he has no idea how they heard of his musical except that word-of-mouth has been strong. The show's script will not be published but will be available for production through private arrangement with Smith or the show's producer, Carolyn Rossi Copeland.

As envisioned by Smith for the stage, "Amazing Grace" is a tale of romance, rebellion and redemption, following Newton, a willful and musically talented young Englishman, through the age when Britain sits atop an international empire of slavery.

Newton is torn between following in the footsteps of his father -- a slave trader -- or embracing the more compassionate views of his childhood sweetheart, Mary Catlett. Accompanied by his slave, Thomas, Newton embarks on a perilous voyage on the high seas. When that journey finds him in his darkest hour, a transformative moment of self-reckoning inspires his blazing anthem of hope.

Although he won't be at the Nairobi production, Smith hopes to become an artist in residence at theatre programs so he can work with students to develop the show.

In this capacity, he also wants to birth his next creation, "Island in the Mist," a Celtic epic about a teenage Irish girl who is the daughter of a warrior chieftain. One day her father brings home a young, aristocratic boy who has been abducted in a raid in England to be their slave. The two develop a friendship and she teases him by calling him Padraig (or "rich-kid"). He will become St. Patrick and she will become the most important woman in Ireland and eventually mother to Ireland's other patron saint, Bridgid.

By partnering with a university, Smith will gain some financial support as he creates the show and students, who usually work on established musicals, will learn the development process from scratch.

"I want to involve the students in every aspect," Smith says. "Most students only see shows after they've been done. I want them to see every step of what works and what doesn't and learn to make something commercial."

As he works to develop these student/professional partnerships, he has already begun speaking engagements with his talk, "Communicating Faith in a Skeptical World."

With plans for the future taking shape, Smith was able to enjoy Monday night's reunion with his cast and crew to celebrate the CD, which is available on Amazon. The sheet music will be out in four weeks from Hal Leonard Co., the world's largest music publisher.

For cast members, Monday was a chance to catch up and reflect on their experience with the show. Michael Dean Morgan, a member of the ensemble, said he had been in "The Lion King," "Mary Poppins" and other large musicals, but his time with "Amazing Grace" was different from anything he had done previously. He especially liked the show's ending when the audience rose to sing "Amazing Grace" with the cast.

"There was this moment like everyone was breathing at the exact same time," he said. "I've never experienced such a group emotion because people came to the play not knowing what to expect. At the last moment, all the pieces come together in the individual experience and the history behind it. People were all singing together, with strangers, because they knew the song. It was a communal moment in the world we don't get, an authentic moment with strangers."

Allen Kendall, another ensemble member who had been with the show since its early reading stages in 2009, had a similar reaction.

"It was thrilling to see how the audience responded," he said. "The reaction was unlike anything I've ever experienced. It was incredibly emotional for us."

[Retta Blaney is an award-winning journalist and the author of Working on the Inside: The Spiritual Life Through the Eyes of Actors, which features interviews with Kristin Chenoweth, Edward Herrmann, Liam Neeson, Phylicia Rashad, Vanessa Williams and many others.]