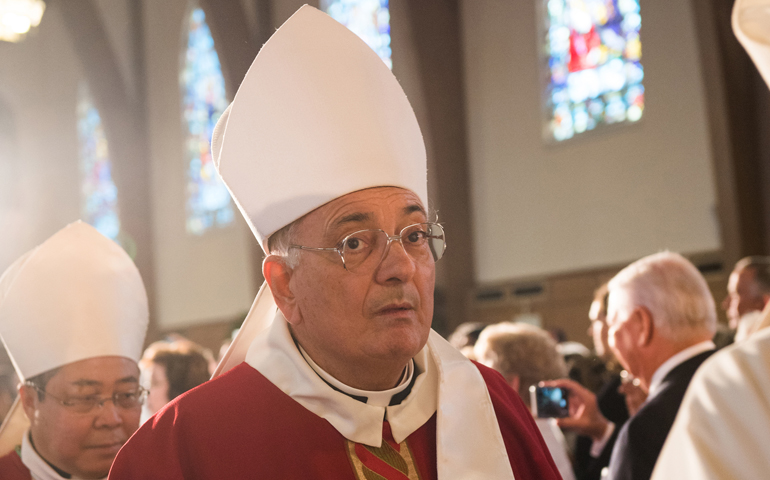 Bishop Nicholas DiMarzio of Brooklyn, N.Y., processes in during the episcopal ordination and installation of Bishop James Checchio as bishop of Metuchen, N.J., May 3 at Sacred Heart Church in South Plainfield, N.J. (CNS/Michael Ehrmann)

In a letter read at Masses Dec. 4, Bishop Nicholas DiMarzio of Brooklyn promised immigrants in his diocese that the church will support them against deportations by the incoming Trump administration.

During the campaign, President-elect Donald Trump promised to deport as many as 11 million immigrants who are undocumented, but recently backed off on that promise on a CBS "60 Minutes" interview. He declared he would focus on what he described as 2-3 million undocumented immigrants with criminal backgrounds, a number disputed by immigration advocates as exaggerated.

DiMarzio promised immigrants in the Brooklyn diocese that they "will be the subject of our advocacy and protection as far as we can offer it to you." He added, "the law of God takes precedence over human laws and to this we must be witnesses."

The letter, wrote DiMarzio, was intended to address the concerns of immigrants who "find themselves in a miserable situation because of a change in administration of our Nation which has threatened many with deportation."

The Brooklyn diocese consists of the New York City boroughs of Brooklyn and Queens, with an estimated 1.5 million Catholics, about half of whom are immigrants, both documented and undocumented. Of the 196 parishes in the diocese, 107 provide Mass in Spanish and Mass is said to be celebrated in about 30 languages in Queens and Brooklyn. The diocese prides itself on being a gateway point for generations of immigrants. DiMarzio came to Brooklyn in 2003, bringing experience that included advocacy for immigrants with his home Newark archdiocese and with the U.S. bishops' conference.

Taking aim at the Trump administration's rationale for massive deportations, DiMarzio wrote that such a step "will not guarantee security."

Quoting the poet Robert Frost, he added, "walls do not make good neighbors," a reference to the highly-publicized Trump campaign promise to build a wall on the Mexican border. The bishop wrote that "the legalization of those already here who are well established and working is a critical necessity."

The diocese will sponsor an immigration rights seminar Saturday, Dec. 10, at St. Adalbert Church in Elmhurst, Queens, from 10 a.m. to 1 p.m. The "Immigration Rights Teach-In" will include immigration attorneys and seminars addressing the rights of immigrants. According to a publicity announcement for the meeting, it will address concerns of undocumented immigrants "if you are approached by an immigration officer, or police officer whether at home, at work, or during a traffic stop." The meeting will also include discussions on "how to prepare and defend immigrant communities."