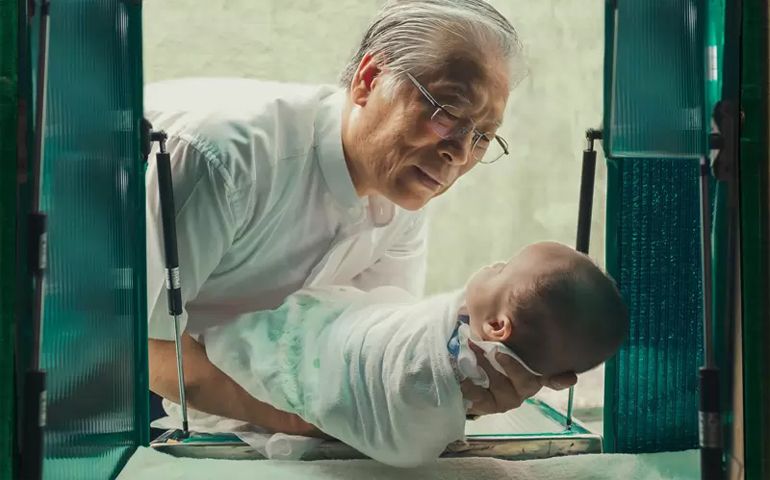 In June 2011, an article by John M. Glionna ran in the Los Angeles Times about a Christian pastor, Lee Jong-rak, who built a depository, or "drop box," outside his home for desperate mothers to leave their unwanted babies. Lee and his wife, Chun-ja, had seen so many discarded babies around South Korea's capital city Seoul that they wanted to do something to save their lives.

Thus, they founded an orphanage at his church for about 20 children. And each time the bell rings, usually in the middle of the night, Lee runs to the drop box and opens the door to find an abandoned baby cocooned in the pink and blue baby blankets that line the box, sometimes with a note from the mother, and sometimes not.

Brian Ivie read the Times article and thought Lee's story would make a good documentary. He was a student at the University of Southern California at the time, and two co-students, Will Tober and Bryce Komae, joined him to produce "The Drop Box," which is opening in select theaters nationwide for three days only: March 3-5.

The film has already been shown at several film festivals, including the Heartland Film Festival, and took home the top prize at the San Antonio Independent Christian Film Festival in 2013.

"The Drop Box" highlights the plight of tens of thousands of babies around the world who are abandoned each year. In South Korea, a very Christian country, girls and young women who bear children out of wedlock are often ostracized. If they do not get rid of their babies, the film says, relatives will when the mother is at school. Government officials and some social workers interviewed in the film think the drop box encourages mothers to abandon their children. Lee, his wife and others do not agree. They believe they are saving lives -- lives that matter even though many of the abandoned children are handicapped in some way.

"The Drop Box" is about a Christian family, the great sacrifices they make and the good that they do with the help of volunteers, their church, and the government to make a difference in the world by caring for unwanted babies. The film outlines the challenges to this family, who are also the parents of a son, now in his 20s, who has cerebral palsy. He was not expected to live, and it is marvelous to see what love can do.

"The Drop Box" is sponsored by Focus on the Family. And if you, like me, are not a fan of on-the-nose Christian genre message movies, know that "The Drop Box" is about the beauty of life, love, faith and hope and may move you to tears and to do something for the 150 million orphans in the world today. Cultures need to change to support life regardless of parentage or health condition; it is not only South Korea dealing with so many abandoned babies.

Lee's personal journey frames the film. He and his wife are ordinary people who live their humanity and faith in extraordinary ways.