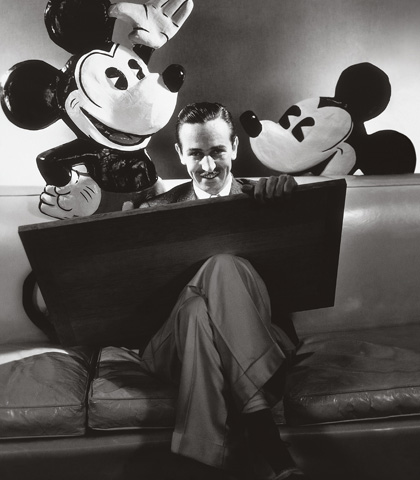 Walt Disney seated with drawing board on his lap and representations of his creations Mickey and Minnie Mouse behind, Oct. 1933. (Courtesy of Condé Nast Archive/Corbis)

A rather extraordinary look into the life and times of Walt Disney and his world will air on PBS American Experience series this week (Monday and Tuesday, Sept. 14-15, at 8 p.m. CDT, 9 p.m. EDT). It is a must-see for anyone interested in the American myth, media studies, story telling through film, animation, theme parks, and film related merchandising.

Producer and director Sarah Colt examines what made Walt Disney one of the most powerful people on the planet within twenty years of beginning his career as a commercial artist in Kansas City. When he returned from World War I Walt was supposed to join his father in Chicago working in a jelly factory.  But that was not how Walt saw himself and he soon moved in with his brothers in Kansas City and began working. He was always working, dreaming, imagining American life the way it was, the way it used to be, and eventually, the harmonious way it could be tomorrow.

Disney's childhood was only happy for a few short years, when his parents owned a farm in Marceline, Mo. Otherwise Walt didn't get along with his father who was tough, demanding and distant. Walt was similar to his father in many ways. As an adult he had few friends, though he was close to family, especially his wife and two daughters, and his brother Roy and his family. But Disney could hold a grudge forever -- and he did.

As Walt Disney Studios grew and grew, about half of the 600 animators who worked for him wanted to unionize with other animators in Los Angeles in 1941. Disney took it as a personal affront and when it came time "to name names" of suspected communists at the House Committee for Un-American Activities in 1946, he did just that, right along with Gary Cooper and Ronald Reagan.  Eventually Disney went on vacation and his brother Roy settled with the union.

Disney's first foray into changing popular culture and entertainment was the invention of the Mickey Mouse character and his appearance in cartoons. Disney added sound and people loved it, as did the million or so kids who joined Mickey Mouse clubs as the Depression rolled on.

Walt Disney really changed the world of art and entertainment with "Snow White" in 1937 -- the first film to ever have its sound track released at the same time, but it was more than that. Disney had created a way to emotionalize fairy tales so that the films connected with audiences. This documentary neatly makes this distinction between popular entertainment and the art that Disney created because his films went beyond enjoying gags; they often moved people deeply. The film offers wonderful archival footage of everything Disney, from early photos to excavating for Disney Land, Disney World and the Epcot Center.  Walt must have made sure that everything he did was documented.

I suppose if you've read a biography of Walt Disney you know that he had a dark side. He was an extrovert and loved celebrity but he comes off as a very lonely person. The film does not hide his ambition, and how demanding he was with the people who worked for him, sometimes ignoring low wages, or no wages.

He had a breakdown in 1931 due to issues over Mickey Mouse and other stresses of running what was becoming the biggest studio in Hollywood. Walt Disney, despite his own personality and character issues, "had a feel for the problems of ordinary people" and he knew how to speak to them through his art.

He had failures as well; such as "Fantasia" (1940) and "Song of the South" (1946) that critics said glorified the relationship between slaves and their masters. His investors came and went. But when he had an idea, such as Disneyland that would embody his personal nostalgia for the way things used to be, he went for it completely, even to selling their family's vacation homes and other family assets.

"Walt Disney" is riveting because his influence on American life and mythology is profound and ongoing. Culture critics will be very interested in this film. The telescript by Mark Zwonitzer is award-worthy.

Walt Disney remains a polarizing character in the history of film, television and popular culture. People either love or hate his imprint on the American psyche. But this is what he was really good at, the film says: "anticipating the psyche of the future."

What's the first Disney film or television show you ever saw? Our family in San Diego could never afford to go to Disneyland when it opened in 1955 but my mom got us the Mouseketeer hats and we watched the television show everyday when we got home from school.