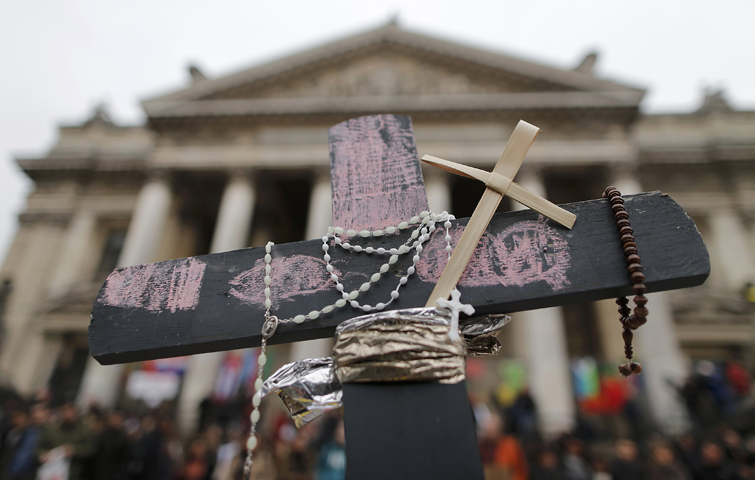 A cross with a rosary and prayer beads is seen March 23 at a makeshift memorial following bomb attacks the previous day in Brussels. (CNS/Christian Hartmann, Reuters)

Tis the season for Easter joy. But how to communicate that in light of the Brussels bombing and other Good Friday-like tribulations? Pastors of varied Christian denominations share their approach.

A church in Tampa undergoes renovations. Not unusual, except this is a parish that has been rocked by accusations against a former pastor of embezzlement, followed by the suicide of the priest. Parish volunteers see the renovations as more than a simple spring sprucing. It is a sign that their faith emerged from the parish crisis.

One step forward, another back. A new pastor in Evansville, Ind., doesn’t like what he sees with a well-established LGBTQ parish group, saying it doesn’t follow church teaching. He wants them to have Courage instead.

A comment on a recent Field Hospital article about Fr. Mark Doherty, a priest of the Archdiocese of San Francisco, who argued that clericalism is an issue with both tradition-minded younger priests as well as more liberal older ones: NCR reader Deirdre Payne of Ridgeland, Miss., writes:

In the article, Fr. Doherty states, "there is no more clericalism present among today's younger clergy than there has been among the priests of the baby-boomer generation. It's just that it tends to manifest itself differently." Not exactly.

We are in the post-Vatican II era by fifty-plus years. Sadly some parishes and dioceses are still rolling out some of the Vatican II recommendations because of the clericalism that have kept the windows of the Church closed and locked wherever they could. These are dioceses and parishes where priests, including bishops, refuse to permit a more inclusive lay participation according to the dictates promulgated in the documents. Prior to Vatican II, there was no question that "Father" was The Decider, The Lawgiver, The Gatekeeper in all things in the office, in the sacristy, and in the Mass; there was no basis for him to not be in charge, except when he was incapacitated - and even then he was in charge. But, "Father" is not God, and we are not "Father's" children; we are God's.

Priests who try to control everything and everybody while trying to guilt parishioners into increasing their giving and cloaking their intellect are driving people away. Prior to Vatican II, they could get away with it because we were taught to "pay, pray, and obey." Now that we know better, we are not as likely to "let Father handle it" just because he says so. We are speaking the truth in love and taking our place in a Church that we sometimes appear to love more than the ordained.