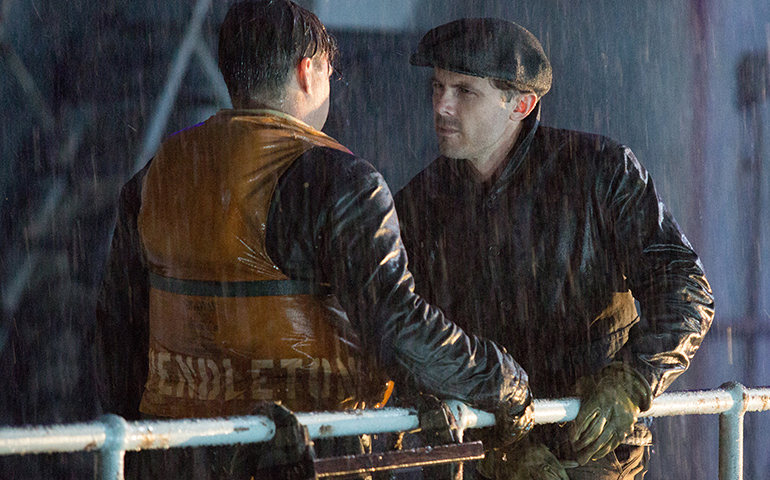 On Feb. 18, 1952, a mighty nor'easter struck the New England coast. As distress signals went out from ships caught in the storm, almost all of the Coast Guard's resources were sent to save the crew on the tanker, the USS Mercer. When a weak signal was received by Chief Warrant Officer Daniel Cluff (played in "The Finest Hours" by Eric Bana) at the Coast Guard Lifeboat station in Chatham, Mass., five men, led by Boatswain's Mate First Class Bernie Webber (Chris Pine) set out on an extraordinary perilous mission to save the remaining crew of the USS Pendleton, a tanker that had been severed in half by the waves.

The film begins as adventure sagas often do, with the status quo: Bernie and a friend are talking about girls and the shy Bernie connects with the lovely Miriam (Holliday Grainger) at a café where the Coast Guard crews hangout. As the weeks go by they fall in love. Bernie, ever the stickler for obeying rules and following orders, is about to ask Officer Cluff for permission to marry, a mere formality, when the storm hits. Bernie's plans for the future are on hold and now in danger of never being fulfilled.

Cluff is a Southerner the Coast Guard brought in after a failed rescue the year before. He is unfamiliar with the New England coast and the men don't appreciate him very much. When he gives the order for Bernie to select a crew, the men hesitate to volunteer to go with him. The unofficial motto of the Coast Guard at that time was, according to the film's producer Jim Whitaker, "You can go out but you don't have to come back." Friendship and dedication to duty win out and the men set out on a 36-foot motor lifeboat meant to carry 12 people.

Whitaker added, "These are men of selfless humility, men of character, real heroism and they all have it in their own way. In a boat built for 12 they would take on another 32. Bernie says, 'We all live or we all die.' He's fully committed at that point." In order to reach the Pendleton, they must first cross a bar of shifting shoals across the Chatham harbor, the same place where tragedy had struck the year before. It is a harrowing experience. They succeed though lose their radio connection and radar when the boat is slammed by giant waves.

Meanwhile, the crew of the Fort Mercer, now without a captain and officers since the ship split, scrambles to find a way to stop what is left of the ship from sinking. Some of the men want to use lifeboats and escape, but engineer Ray Sybert (Casey Affleck) quietly establishes his leadership by demonstrating the danger of abandoning ship. He constructs a manual rudder and the men set up an elaborate communication system from the look out on top to the engine room so they can crash the tanker onto a reef.

Time is running out.

When I spoke with filmmaker Jim Whitaker, he told me that everything in the film is true, that this story of the greatest small boat rescue in U.S. Coast Guard history was achieved by "real superheroes without capes." He added that they were "quiet, humble men who believed in doing the right thing and didn't want any notoriety." In fact, the Fort Mercer's Engine Man Third Class Andrew Fitzgerald, played by Kyle Gallner, never told his wife until she asked him about it three years after they were married.

Whitaker said that these were men of character, integrity and faith. One of the men on the Fort Mercer had a Bible, and in one brief scene the men join together to pray. Another takes out his rosary. "It was appropriate," Whitaker said, "that with the loss of the ship and all the men in leadership that they should take the time to recognize what had happened through prayer."

The movie, shot in 3D, was filmed mostly on Cape Cod, the South Shore, and at a shipyard in Quincy, Mass. You know when a 3-D movie is good when you become so immersed in the film that you forget you are wearing the glasses.

Kudos to Disney for acquiring the rights to the book on which the film is based, The Finest Hours: The True Story of the U.S. Coast Guard's Most Daring Rescue, written by Michael J. Tougias and Casey Sherman. This story about men who had to rely on their internal convictions and make the right decisions, even if it meant not following orders to save lives, made me admire it even more. They are fighting nature to survive. "They followed their own inner compasses and made decisions accordingly," said Whitaker.

If you like action adventure films but just may be tired of endless fantastical superhero movies with the same basic story line, littered with explosions and death defying feats, "The Finest Hours" may be just the film to see. I was very impressed by the actors, especially Pine and Affleck, who were able to exhibit the quiet, steely courage of men working together under such extreme, impossible conditions to make it home. Craig Gillespie directs ("Lars and the Real Girl," "Million Dollar Arm"), and the excellent cinematography by Javier Aguirresarobe ("The Sea Inside," "The Road") embraces you in the icy grip of an angry sea.

"The Finest Hours" is a perilous journey that inspires and makes you long for a bigger boat, lifejackets, and a waterproof GPS. How they make it home is nothing short of miraculous.