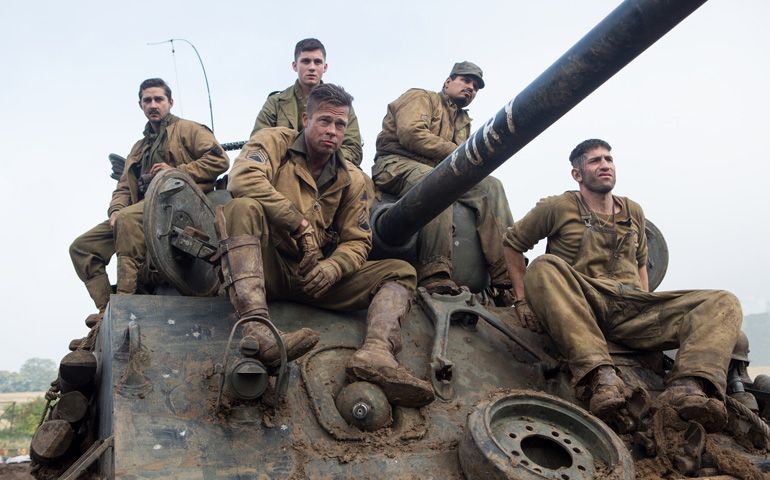 Sgt. Don "Wardaddy" Collier (Brad Pitt) commands a five-man crew on a tank named "Fury." Their assignment is to join with three other tank units and first take one German town, then move on to take a crossroads and hold it. It is after the landing at Normandy -- many men have been killed, yet they must go on and do their jobs. The fifth man on the tank crew is the newly assigned Norman (Logan Lerman), who is a typist and clerk. He is totally unready for what he is about to face.

The film opens with Wardaddy brutally killing a German soldier with a saber. He is a killing machine with no mercy. When they capture a German soldier who pleads that he has a family -- he even shows Wardaddy photos -- the sergeant decides to use this as a teachable moment and cruelly forces Norman to kill the man when he should have been taken prisoner. Wardaddy is not completely dead to human feeling, however. He loves his men and they love him -- even Norman bonds deeply with the man by the end of the film.

Here's what's good about this film: It strives for authenticity, according to the film's production notes. Existence inside the tank becomes like that of a family. Indeed, Wardaddy calls it his home. You can feel the fear and the extreme vulnerability of the men in tanks that can do little to protect them, just like the tanks used in the wars in Iraq and Afghanistan. (One would think that after 60 years, tanks would have improved. Well, war is hell.)

Here are the faults with the film: Let's start with the "Star Wars" effects of showing through light the trajectories of all the bullets and grenades. It was distracting, and I thought the technique trivialized what these men experienced by making it look like a video game. Indeed, when Norman shoots and kills his German and loses his innocence, most of the audience cheered and clapped.

When the U.S. soldiers take the small town, the first thing they do is engage a prostitute. Wardaddy sees movement in a flat and takes Norman with him, and they discover a woman and a teenage girl there. At first, you think, "Oh, here comes the rape." But no, though Wardaddy does tell Norman, after he and the young girl bond over music, that if he doesn't use the bedroom, he will. It's not totally clear if anything happens in the bedroom, but Norman and the girl seem happy enough.

Finally, the last stand. Wardaddy and his team are isolated when their tank breaks down. They could flee in the face of an oncoming SS unit of 300 men, but Wardaddy decides to take them on. One by one, his men decide to stay, too. There are deep moral and ethical questions here, to take on a probable suicide mission when they clearly did not have to do so.

Fast-forward to the end (without giving it away completely): Medics find Norman without any physical wounds and declare him whole and a hero. They never look inside for the moral injury that will change this man's life forever.

I don't know why Ayer decided to make this film. Yes, he interviewed World War II veterans and then wrote a story about a tank crew that became family, a story perhaps not told clearly enough in "Saving Private Ryan" and "Band of Brothers." Yes, he graphically illustrates with intense gore what war does to those who fight and the inevitability of death in war. Perhaps a closer look at the film through the lens of psychology would be useful because the characters are distinctly drawn, even if their Southern accents make it difficult to understand some of the dialogue.

The men pray and exchange Scripture verses as a way to justify their actions and to console themselves; along with the girlie pictures in the tank and trophies taken from Nazis they have killed, there is a cross. But this does not a Christian movie make.

But right now, today, "Fury" adds to our culture of violence without adding much light to anything. We already know that war is hell.