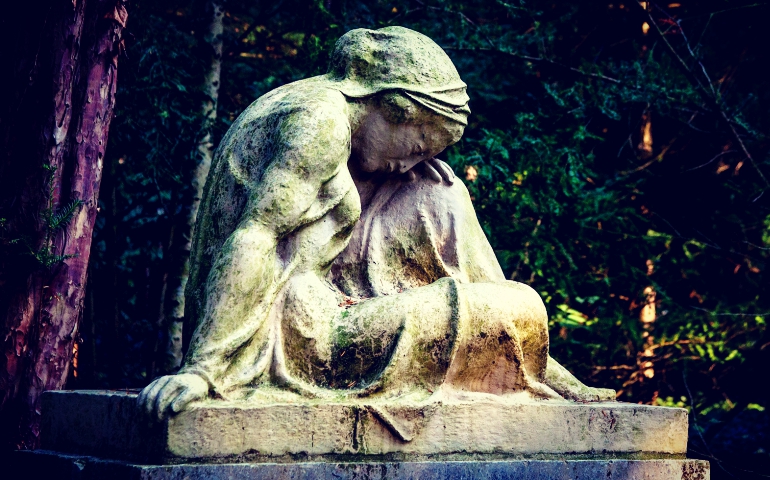 Let's get real. Where the rubber meets the road for most of us in our relationship with God is when we are sick or hurt, or the people we love are. Everything else falls away then.

If, as Shakespeare postulated in "As You Like It," "all the world's a stage, and all the men and women merely players," then facing your own or your loved one's illness or injury is a lot like being suddenly alone at center stage, with a single spotlight on you.

And you stand there, your hand over your eyes, searching the dark rows of seats stretching up and out, asking, "Uh, God. You out there?"

Because that is the moment when we are reminded, sometimes brutally, that we die.

All the details, the business and busyiness, the running around and getting things done and cellphones and calendars and money and clothes and shoes and cars and houses and stuff cease to matter. We are naked, and we are mortal.

And we darn well better not also be alone.

Since I was a little girl, I have felt an intimacy with God. Like a kid with a homemade telephone made of two empty soup cans attached by a string, I have steadily sent a stream of conversation through that line, confident it was being heard on the other end. And occasionally, reverberating back along that string, I have received gentle replies.

But when I or those I love are sick or hurt, I find myself shouting into the can at my end, and not only expecting but demanding an equally loud answer. Right damn now.

When I was 21, my beloved Grandpa Red was dying in a hospital in Lancaster, California. After years of being in a wheelchair from a spine injury, now he was riddled with cancer and in great pain. When I walked into his hospital room, I obviously wasn't doing a good job of hiding the feelings throbbing behind my eyes, because Grandpa took one look at my face, and said, "Whoa. Miss Amy. Who are you mad at?"

I stood there with my hands on my hips, feeling furious and helpless. I said, "God."

The corners of Grandpa Red's brown eyes crinkled, and he said: "Why, dear?"

Hot tears came in a rush, and I said: "It isn't fair. This isn't fair. You are the best person I know."

He nodded. "Well, I guess it takes a lot of pressure to make a lump of coal into a diamond." He stared at me straight. "And I guess I must be shining pretty bright now, huh? Almost ready to go."

I just hugged him. He had always been lanky and muscular, a strong Irish-German farm kid, slinging sides of beef up onto his shoulders in the warehouse behind his butcher counter. Now, I felt only bones covered with thin paper. The lean freckled arms that once lifted and tossed my chubby baby body high were now skeletal and mottled with bruising from needles and tubes.

I kissed his cheek, and stood up. I saw I had left a wet smear of tears on his face.

Peace and acceptance radiated from his eyes, but I felt only anger and despair.

When he died a week later, I was relieved for him, but sorry for myself. One of my great friends was gone. The hole left where he had been was wide and deep.

When I learned that editor and writer Brian Doyle had died in May, I experienced similar feelings of rage and loss. It just isn't fair. Brian was only 60. He left his wife and three kids, plus his mom and his dad, longtime Catholic Press Association executive Jim Doyle. His folks are in their mid-90s but still plenty sharp enough to feel the loss of their son keenly.

In the fall of last year, I interviewed Brian for NCR about A Sense of Wonder, his new anthology of essays from University of Portland's literary magazine, of which he was editor for more than 20 years. Somehow, my piece ended up being less about that book and more about the man himself.

Through our emails and phone conversations, I found I just really liked this guy. He was passionate about his work, his faith, his family. His dry sense of humor reminded me a lot of my Grandpa Red's, in that nearly every sentence Brian uttered had some wry twist, a straight-faced play on words, an artful pun. I invited him and his wife, Mary, to visit us next time they were heading north, as only a few hours separate their home in Oregon from ours in Washington.

NCR published my review on Nov. 30, cosmically enough only a few days after Brian was diagnosed with a brain tumor. The comments on that piece became an inadvertent "outing" of his condition, one way in which his news was spread nationally, and provided a link to the GoFundMe page started to support his family.

Brian died on May 27, almost exactly six months to the day after his diagnosis. The entirety of those months was spent under medical care — with brain surgery, chemotherapy, and finally hospice. Brian's physical decline was dramatic and steep. From the updates provided by the creator of his GoFundMe campaign, I read that though his body quickly deteriorated, he never lost himself, his acuity and delight in words, his kindness and sense of humor, his tenderness for his family.

And also like my Grandpa Red, while Brian's physical form diminished, his mind and spirit seemed to glow ever more fiercely. When I learned Brian had died, my reaction was thus very like what it was at Grandpa's passing in December 1984: relief for him, but devastation for his family and friends. I even felt sorry for myself — only a new admirer and almost-friend — for the loss in advance of the laughter and communion that could have, should have, would have been.

I find myself hoping and praying that the Doyle family's Catholic faith and community sustain them. But beyond that, that each one of them holds some conduit of intimacy, via him, with God.

The truism "None of us gets out of here alive" is attributed to many sources. But it takes the loss of people we love and admire, or facing our own impending mortality, to stop and remember it profoundly.

That reality is the core of being human. It inspires and informs everything else.

The 1993 film Shadowlands is based on the true story of British professor and Christian writer C.S. Lewis and American poet Joy Davidman's friendship, love and brief marriage. She died from cancer only four years after they were married. There is this amazing exchange where they are on holiday during her remission from cancer, but the understanding that she will die is coloring the trip for Lewis (whose nickname was Jack). He is grieving in advance.

Joy: It's not going to last, Jack.

Jack: We shouldn't think about that now. Lets' not spoil the time we have together.

Joy: It doesn't spoil it. It makes it real. Let me just say it before this rain stops, and we go back.

Jack: What's there to say?

Joy: No ... I think it can be better than just managing. What I am trying to say is that the pain then is part of the happiness now. That's the deal.

Joy's final line is based on a quote from A Grief Observed, the book C.S. Lewis wrote after Joy's death: "The pain I feel now is the happiness I had before. That's the deal."

As he often did in his writing, Lewis nailed it. This is the great truth of loving each other here on earth.

No matter how long we live, it is brief. Whether it is nine months or 90 years, life flashes past, and ends. For me, the only shield I have to protect myself from pre-grieving that loss is faith in God's eternal love, and the belief that after our bodies die, our souls will reunite.

As my first child, daughter Chelsea, was born — and she left the warm enclosure of my body — the words "Oh, I love her" and "Oh, she will die" washed over me like tangled seaweed rolling in a wave. Those feelings of greatest joy and greatest fear were organically entwined, knotted inextricably. Impossible to feel the intensity of one without the other.

Chelsea is now 30 and a mother herself. Two years ago, after her daughter Mary was born, my husband, Dan, and I rushed into the hospital room to see them both. Chelsea was holding this tiny pink bundle, and looked up at me, tears in her eyes, and said: "You love me this much?"

"Oh, yes." I smiled through my own sudden tears. "Just wait. There is even more. Forever, and then some."

My greatest challenge is remembering to trust God, to not just believe but know that love connects us infinitely. When death separates me from those I love — or I stand on the precipice of that great chasm myself — that faith is all I have.

That, and a tin can with a string hanging out of it. Connecting me, hopefully, to eternity.