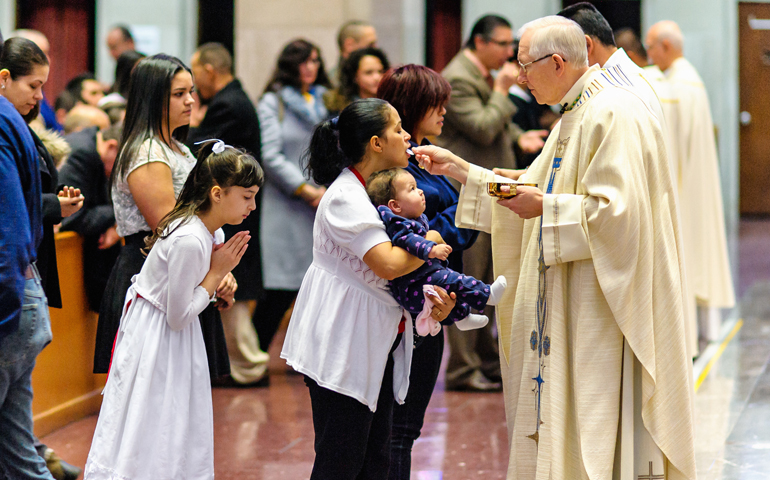 Archbishop Leonard Blair of Hartford, Conn., gives Communion during a Mass in honor of Our Lady of Altagracia at the Cathedral of St. Joseph in Hartford, in this 2014 file photo (CNS/Bob Mullen)

The Hartford Archdiocese announced May 7 that its 212 Connecticut parishes will be consolidated into 127 by June 29, downsizing the archdiocese by about 40 percent.

It may be the most massive effort of its kind in a series of consolidations that have taken place in dioceses in the Northeast and the Midwest over the past decade as the number of priests and Catholic Massgoers in those regions decline.

The archdiocese claims 550,000 Catholics over a three-county region which includes the cities and towns of Hartford, New Britain, Waterbury, Meriden and New Haven. Those cities will be hardest hit by the consolidations, as Catholic populations gravitated to the suburbs over the past few decades.

In a video posted on the archdiocesan website, Archbishop Leonard Blair said the changes are necessary and "we cannot responsibly kick the can down the road." He noted that since 1969, the number of Catholics in the archdiocese has declined by 69 percent and the number of priests by 65 percent.

The consolidation comes after a two-year process of meetings throughout the archdiocese involving pastors and parish leaders. Blair, in the video, said that the archdiocese is willing to consider changes to its plan, but pleas based on "self-preservation" of parishes is "a nonstarter."

As part of the plan, more than 40 pastors will be reassigned or retired. The newly-formed parishes will be given new names.

A National Catholic Reporter article noted last year that Connecticut leads the nation in the percentage of baptized Catholics who no longer identify themselves as Catholic. Evangelization and revitalization of parishes is a vital component of the new parish plan, according to the archdiocese.

Blair came to Hartford in 2013 after 10 years of leading the Diocese of Toledo, Ohio. Soon after coming to Connecticut, he instituted a planning process which led to the May 7 announcement.

The response so far to the plan has been muted, said Mark Silk, director of the Leonard E. Greenberg Center for the Study of Religion in Public Life at Trinity College in Hartford. Connecticut's cities have long struggled, and Catholics have left them over the decades into its thriving suburbs.

"They've done it in a fairly careful way," he said of the archdiocese's process, which in the end offered few surprises to those who were paying attention.

"The nearest thing I can compare this to would be ministering to people who have suffered a death in their family. There's going to be pain," he said.

Joanne Moran, a member of St. Peter Claver Church in West Hartford, a parish that will survive the consolidation, told NCR that Blair's approach was thorough but lacked an examination of wider issues.

Her parish was told months ago the statistics about the decline in Mass attendance and priests since 1965. That helped parishioners better understand the issues. When those statistics were announced at her parish, there was an audible gasp at a Sunday Mass.

"It's an unbelievable attrition," she said. "It was a real shock."

Examination of the number of parishes in the archdiocese had been going on for decades, but movement was slow because few pastors and lay leaders wanted to cooperate if it meant their parishes would be forced to close. Blair's arrival in 2013 signaled that things were going to change, said Moran.

Still, she said, the changes are based "to look more like a business model than a Christian faith community." She said that the planning process, which looked at the number of priests available for ministry, failed to take into account the option to better use women in pastoral roles. The possibility of ordaining women as priests or deacons was never considered.

According to press accounts, Blair noted that further consolidations may have to be made. The changes announced May 7 may only be a start as the archdiocese plots its future.