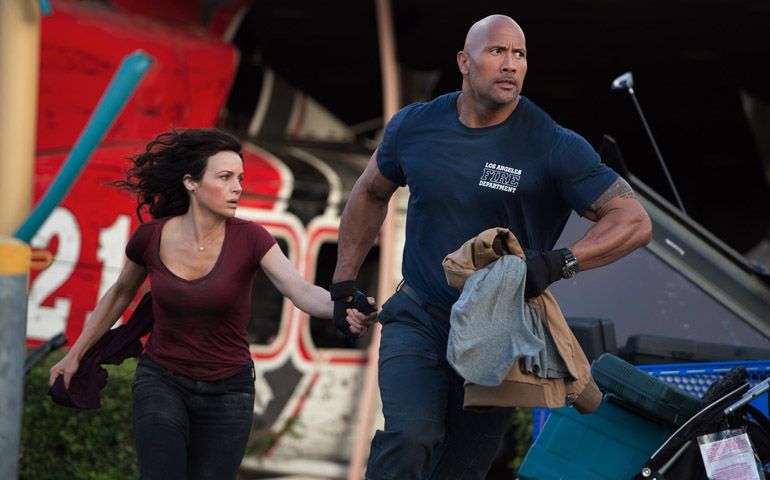 Ray (Dwayne Johnson) is a Los Angeles firefighter who heads a team of helicopter rescuers. Not long after saving a girl whose car is resting on a canyon cliff, the world seems about to end: San Andreas, Calif.'s main north-south earthquake fault line is triggered by a series of quakes around Hoover Dam in Nevada.

But Ray's world is already fragile because of a pending divorce from his wife, Emma (Carla Gugino), and the earlier death of one of his two daughters. Emma introduces him to her new boyfriend, Daniel (Ioan Gruffudd) and announces that they are moving in together. Adding insult to injury, Daniel offers to give a ride to Ray and Emma's college-bound other daughter, Blake (Alexandra Daddario), in his private jet. They soon depart for San Francisco.

When the first quake hits, Emma contacts Ray, who manages to fly through some of Los Angeles' tallest buildings to rescue his estranged wife from a rooftop. Then Blake calls frantically from Daniel's car in an underground garage. A quake has hit San Francisco, too. Debris has pinned her in the back seat and Daniel goes for help, only to keep running. Ray and Emma turn the helicopter toward San Francisco to save her. They end up taking every means of transportation possible -- except a train -- to find her.

A young engineer, Ben (Hugo Johnstone-Burt), and his little brother, Ollie (Art Parkinson), help Blake escape, and together, they must find their way out of unimaginable devastation as the quakes keep on coming, followed by even more disasters.

Meanwhile, at Caltech in Pasadena, seismologist Lawrence (Paul Giamatti) and his team have figured out a way to predict earthquakes -- proven, unfortunately, when the Nevada quake hits. Now, with a TV crew headed by Serena (Archie Panjabi) and her team taping everything Lawrence says, the scientists try to get word out to save as many people as possible.

"San Andreas" is a very intense imagining of what only a series of 9.0 earthquakes and above would wreak on California. The story of Ray and his family as well as the scientific information humanize the consequences of nature's fury and make the action more palatable. But the story is very thin and more like a delivery system for a message -- albeit an important one. Blake, who is obviously her father's daughter, demonstrates this: As she leads the two brothers from one safety point to another, she teaches communication and survival techniques to the audience.

"San Andreas" is not for the weak-kneed or faint of heart. Adrenaline junkies may like it, and fans of Johnson will be glad to see that though his acting skills make his character credible, they are probably overshadowed by his physical prowess. It seems that these actors did most of their own stunts and, if so, they deserve a huge bonus. If not, then the editors and special effects people do. Gugino and Daddario were very good.

"San Andreas" is loud and filled with relentless action and devastation. It is not a good advertisement for California, but just as my religious community is not going to leave because "the big one" is coming, local audiences probably won't either, and people will keep moving here. At the premiere, they gave us "preparedness bags." At least if the big one does hit, we can't say nobody warned us.

Leaving aside the constructed nature of the narrative, "San Andreas" does draw attention to the power of the earth and asks us to have the humility to respect nature. Although not mentioned in the film, I kept thinking about all the earthquakes in Oklahoma, quakes that did not happen before large-scale fracking began not long ago. (The process pushes water mixed with toxic chemicals at high power into the earth to force out natural gas.) The earth's crust is fragile and formidable. It is interconnected, and people's lives are at stake. I think it would be a very good idea to take the film's message of respecting nature seriously and to rethink fracking and other practices that put the future of the earth and its people at unnecessary risk.