'Invisible War' exposes pervasiveness of sexual assault in the US military 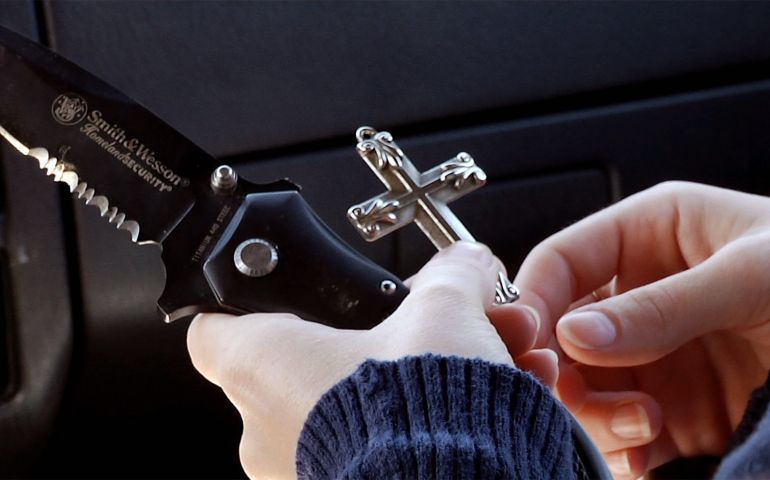 Former Coast Guard servicewoman Kori Cioca displays in the documentary "The Invisible War" two items constantly at her side since her attempted rape by a fellow Coast Guard service member: a cross and a Smith & Wesson knife. (Photo: courtesy Cinedigm/Docurama Films)

The officer in charge of the Air Force’s efforts to confront sexual assault, Lt. Col. Jeffrey Krusinski, was arrested May 5 for sexual battery in Virginia. The tragic irony of this arrest occurring days before the airing of this new documentary, “The Invisible War” by the Oscar- and Emmy- nominated team of director Kirby Dick and producer Amy Ziering, cannot be overstated.

This deeply disturbing documentary is the voice for several female victims of sexual assault in all branches of the military, and some male victims, as well. The women have banded together to file suit against the military for violation of their constitutional rights.

One former Coast Guard service member featured in the film had her face fractured while resisting the advances of a rapist who continued to harass her afterward. He is still in the Coast Guard and has never been prosecuted.

The female, Kori Cioca, after five years, has not been able to obtain benefits from Veterans Affairs for her injuries. In fact, during the process they ordered an X-ray of her back even though all the paper work and doctor reports stated that she was seeking benefits for facial injuries. Since the attack she has only been able to eat soft foods such as mashed potatoes and Jell-O.

The film starts in 1991 with the Navy’s Tailhook scandal; then proceeds through the 1996 Aberdeen Proving Ground case, where 30 service women filed complaints of sexual assault; from there to 2003, when investigators discovered that there had been 42 allegations of rape in the Air Force Academy over 10 years — complaints that were ignored; and into 2011 when 3,192 cases of sexual assault were reported, with the unreported cases left to estimations.

The most that the Department of Defense has done so far about sexual crimes in the military is to create a poster campaign for military personnel advocating the buddy system as a means to preventing sexual assault. In one dramatization, a female soldier leaves her workplace then runs back when a man harasses her. The soldier on duty blames her: “Why were you alone? Where was your buddy?” She replies, “I didn’t think I needed one.” Obviously, she did and so do you.

Cioca, now married with a child, carries a cross and a Smith & Wesson folding knife with her. She says she knows Jesus is with her but she needs the knife just in case.

According to the victims and their advocates in the film, the crux of the problem seems to lie with unit commanders who have no legal training, and sometimes no higher education. It is up to them to adjudicate cases, whether or not accusations move through the military justice system. Often, they are the assailants or their buddies are; meanwhile, victims can be prosecuted for various reasons: giving a false report (even if they didn’t) and committing adultery (even if they were raped and are not even married.)

Almost all of the victims have attempted suicide at least once. One of the saddest moments in the film is when Cioca finds and reads the suicide note she wrote for her mother. After one attempt, Cioca said she decided to live once she learned she was pregnant, hoping the life within her would not have to live through what she had.

Equally sad is the story of one Navy recruit who joined the military because her father, still in the Army, encouraged her. He breaks down when he recalls the phone call that told him she was no longer a virgin because she was raped.

Almost all of these young women joined the military out of idealism and the desire to serve their country. The reports of rapes and assaults at the prestigious Marine Corps Barracks in Washington, D.C., are stunning.

Two days after seeing the film in April 2012, Secretary for Defense Leon Panetta took away the right to adjudicate rape cases from commanders.

The film does not tell us what the military, overall, is doing to make rapists and assailants accountable. A pitiable percentage of these sexual predators are prosecuted; there are virtually no consequences for rapists in the military, nor is there a database for offenders. They only make it to the national database if they receive more than one year’s punishment for a crime (that the military then deems equal to a felony).

The lawsuit filed by the former servicewomen, many of whom are interviewed in the film, was thrown out. The Department of Defense deemed that their rapes and injuries were the result of an “occupational hazard” and therefore merited no redress.

My conclusion after seeing “The Invisible War” is that the film should be a warning, at the very least,  to women to stay out of the military until the Department of Defense makes the changes needed that will protect the rights of all military personnel and assure justice. Assailants are unpunished, not listed and known to re-offend, and then they return to America’s neighborhoods. This is a horrifying situation.

The U.S. military is a closed system not unlike the Catholic church. The church is still learning its lessons; what will it take for the military to be held accountable for this travesty?

USA Today reported on May 7 that Secretary of Defense Chuck Hagel, after Krusinski’s arrest, has ordered the military to take immediate steps to address the problem of sexual assault within its ranks. President Barack Obama told victims that he “has their backs,” though what this means in practical terms is still to be determined.

'The Innocents' tells a story of trauma, grace