A lesson from the siblings of 'specials' 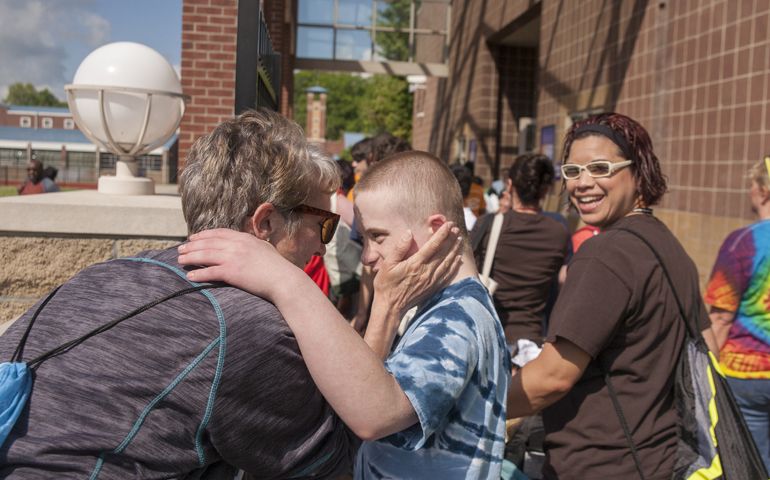 In February, our son Nick, who is 28 and has autism, participated in his first Special Olympics basketball tournament. I am shamelessly bragging when I tell you that Nick was one of two athletes on our team — the other was his buddy Austin — who did not sit on the bench once. Austin and Nick were not the highest scorers, but they ran up and down the court for the entire two games. They were stubborn and sweaty and glorious.

During both games, I had the honor and pleasure of sitting amidst a remarkable family, the Tiessens. Their son Ian is the high scorer and biggest ham on our team. His hijinks and dance moves on the court made me grin so hard my face hurt.

Twelve years old, Ian is the youngest of four Tiessen boys. Two of his three older brothers — Isaac (a high school senior) and Andrew (a freshman) — acted as unofficial assistants to their dad Jon, our team's coach.

I sat on one side of Ian's grandma Clara, and Ian's mom Lori sat on her other side. Clearly no newbie to cheering on her grandsons at sporting events, Clara followed every move of the games, and constantly hollered out, telling Ian exactly what he should do next.

"I can't help it," she elbowed me, winking. "I am a mother. I just always seem to give instructions."

As I watched Ian's siblings cheer for their little brother — Ian invariably looked at his brothers' faces immediately after each shot, successful for not, seeking their affirmation — it was also apparent that both teenagers were keenly aware of and attuned to Ian's teammates.

When an athlete stumbled back to the bench, the Tiessen boys were right there, giving high fives. When Nick lost his water bottle, Andrew ran out and bought half a dozen waters for the team. When our sole female athlete Elizabeth jammed her finger on the ball and was crying, it was Isaac who sat by her, checking out her held-up pinky. His steady assurances that it looked okay slowly but surely calmed her down until she was ready to rejoin the game.

And when, in front of the crowd of strangers, Andrew leaned over and kissed Clara on the lips, and said, "I love you, Grandma," that sealed the deal.

I leaned over to Lori and said: "You sure have some nice boys."

In that moment, I knew that Lori and I shared a secret, and a joyful gift.

I have long told people that growing up with their brother Nick turned my other two kids into "little old people." Compared to the horror stories I heard from family and friends about their teenagers, the high school years of my daughter Chelsea (now 30) and son Duncan (now 24) were relatively uneventful. We were Nick's "pit crew," and helping him negotiate the world left us with very little time or energy for much else.

Like the Tiessen brothers, Chelsea and Duncan both displayed a surplus of kindness and patience far beyond their years. On the rare occasion that either of my kids did decide to flip me some typical teenager attitude, I would just roll my tired eyes and say, "Please!"

The kids in elementary school called Duncan "Reader Boy" due to the book he carried in each pocket, and this was not meant as a compliment. But bullies otherwise left him alone due to his size. He was a gentle giant. The only time Duncan and bullies intertwined was when he could not keep his body from sliding between one of them and a disabled kid. Like a magnet's pull, he could simply not stay out of it if some kid like his big brother Nick was getting picked on.

You see, our family was no stranger to bullies because of Nick. Nick was never "main-streamed," that is, he was only ever in the special education classroom. But at recess and lunch, Nick and his classmates were out with the "typical" kids.

And every year, I would get called at least once to the principal's office, to face a scruffy band of boys who had been picking on Nick on the playground.

There was always a leader. Usually the biggest one, but sometimes just the slickest, quick-talker of the bunch. It was easy to see who the alpha was.

I was raised with three little brothers, so I get boys. It is all about body language. If they were puppies, they would be sniffing each other's butts. It is just how it is. Using those instincts, they would invariably sniff out Nick's weakness — his oddities identifying him as clearly as an upwind odor — and like a pack, descend upon him.

I would direct my comments to the leader. The other boys would sneak glances from downcast faces, to see how much he was busted, and more importantly, how he would react. The pride of the pack was on the line.

Through a series of innocuous sounding questions, I would get the leader to admit that they never wore helmets, not when riding bikes or skateboarding or any number of other foolish, dangerous boy activities.

Once established, I would say, "Fine, no helmets. And when you fall and crack your head open, and that takes a long time to get better. So during that time, you walk funny, you talk funny, you eat funny. You drool sometimes. You wet your pants."

After the group giggle, I would add, "And while you are waiting to get all better, you want your friends to treat you just like you have been treating Nick. Right?"

And the leader would always say something like: "You mean, Nick is like us? Only he hurt his head one time?"

I would nod and answer: "Yep. When he was born, his brain got hurt. But he feels just like you do. He is. Just. Like. You."

The beauty and tragedy about this annual routine was that without fail, that group of boys would come to school the next day and be Nick's protectors instead of his tormentors.

They just needed somebody to stop yelling at them, or hitting them, and talk to them like the short people they are. To help them feel some empathy, to walk in the shoes of a perceived weakling just for a moment. And every single time, they changed their behavior from bullying to kindness. Every single time.

Last month, when I read about the four Chicago teens who tortured and beat an 18-year-old disabled kid, and filmed it live to show on Facebook, I immediately thought of those packs of boys from Nick's elementary school years.

While I was of course enraged about what they had done to that young man, I felt an almost equal amount of anger that they were clearly repeating the violence and hatred they must have experienced in their own lives. I truly believe that if they had once been shown how to give and receive kindness and empathy, it would have changed them instantly.

Perhaps it is naive to imagine that instead of slamming these offenders into a system with other brutal teens — where they will just learn more ways to hate and hurt each other — there might be another way?

What if instead of picking up litter, or painting away graffiti, their "community service" was to help out Special Olympics athletes, or volunteer in special-needs classrooms or daycare centers?

Of course, they would need to be supervised to prevent further bullying. And sadly, many of these kids might already be too damaged and jaded for it to matter.

But if just one kid out of each bunch had his heart and mind opened in sympathy, wouldn't that be something? And if that kid happened to be a leader, he could pull some of his buddies from the bullying side to the protector side, just by the osmosis of running in a pack?

In Long Walk to Freedom, Nelson Mandela wrote, "No one is born hating another person. … People must learn to hate, and if they can learn to hate, they can be taught to love, for love comes more naturally to the human heart than its opposite."

Watching our son Duncan's inability to stay out of it when a vulnerable kid was being bullied — and the Tiessen boys' inspiring compassion and awareness of quirky athletes like our son Nick — gives me hope that this is true.

People | A lesson from the siblings of 'specials'

Life's trials train Christians to be sensitive to others, pope says

The season to be merciful