Loving the world, one face at a time 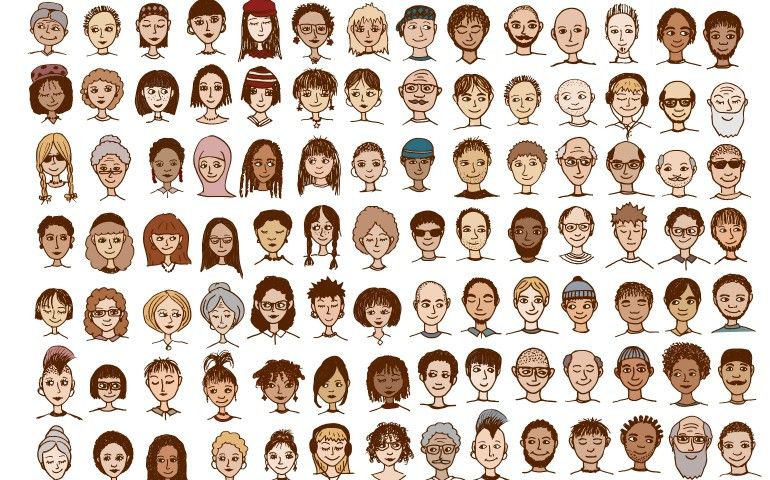 I have been on Facebook for about 10 years. I started using the social media site to shamelessly spy on my then-teenaged youngest son, Duncan (now 25). His older sister, Chelsea (now 30), advised me with a jaded tone that if I really wanted to know what was going on with my kid, I should check out what he was doing on Facebook.

I imagine that sharing this lowdown gave Chelsea at least two thrills: she was able to "narc" on her brother, as well as once again "school" her square mother about what was hip and happening, technology-wise.

Just recently, Chelsea clued me in that Facebook is now considered basically passé by her generation; she and her peers now share the moments of their lives almost exclusively via Instagram and Snapchat.

Facebook, she said, seems to be primarily a communication tool for "old people," meaning baby boomers like me, who use it to share photos of their adorable pets, grandbabies, delicious-looking and amazingly easy recipe videos and, of course, political opinions.

To combat the red and blue ranting, some of my Facebook friends have recently shared those "121 Things I Bet You Didn't Know About Me" posts, lists of items such as "I have been skydiving. Yes. I have been in a hot air balloon. No." And so on. They are supposed to be light-hearted and informative about folks we thought we knew everything about, and as a special side bonus, they slam no public figures or policies whatsoever.

So here is One Thing I Bet You Didn't Know About Me: I am a "super-recognizer."

That means once I see your face, I am biologically designed to remember it. You are unforgettable … to me.

My husband Dan and I were watching the news program "20/20" a couple years ago and saw a segment on face-blindness, or developmental prosopagnosia. It is a brain dysfunction that means someone not only cannot remember faces, they don't recognize their own family and friends. Not their Mom, Dad, siblings, spouse, children, and sometimes not even themselves in a mirror. Everyone at every moment is brand new, literally a stranger.

At the end of the program, it said that Harvard planned to study folks who had the opposite of face blindness, what they called super recognizers, to research how their brains might function differently, with the ultimate hope of some kind of treatment to help those struggling in a world of perpetual strangers.

As the credits rolled, Dan turned to me and said: "Wow, that is so you. You never forget anybody! You should do this."

So I did. I went to the Harvard Medical School Research website and filled out a questionnaire. Over the next few months, I received emails that contained tests to complete and send back. About a year later, a nice lady from the university named Sarah showed up at our front door here in Washington State. She spent a long weekend in our living room, taking me through test after test on her laptop computer.

At the end of those three days, Sarah packed up her gear in readiness for departure to visit "the four other super-recognizers" with whom she was working in the United States. The next one was in Florida. She was clearly excited that her next gig was in a warmer locale. It had rained the whole weekend.

Sarah eventually sent me a link to the study in which my data was incorporated, but I have yet to hear how it might be implemented to assist those who have face-blindness.

What I did learn was that not only do I never forget a face, my brain literally loves faces. Each and every one is a blessed artwork to me, revealing the arc of that particular life from infancy through maturity to being elderly. That is, if you are old, I can pick out your baby picture from a pile of photos — 100 percent of the time. Seriously. Yes, I agree; it is kind of spooky. My family now has documented evidence that I am an oddball.

One quick note: Just as having face-blindness does not in any way affect one's intelligence — for example, the eminent neurologist and author Oliver Sacks suffered from prosopagnosia — being a super-recognizer in no way makes me a super-genius.

The half of my brain that is not stuffed with faces seems to be packed with completely useless song lyrics. If I don't write it down, I can't remember a phone number or what I need at the grocery store, and I have stopped counting the times each day I wander into another room, then stand there wondering, "Why on Earth did I come in here!?" In short, I seem to be a one-hit wonder.

Sarah told me this unique passion for faces originates in those first moments as a newborn, when we look at the faces of our caregivers and bond with the details of their eyes, their nose, their ears, their hair and forehead and eyebrows and chin. This is why a baby will cry if someone with different hair color holds them, but seems comfortable enough if the person even slightly resembles their parents. Like baby birds, we imprint those details, and they signify safety and survival. And hopefully, love.

Sarah also explained that face-recognition is a spectrum, and I happen to fall at the very far end, or about 1 percent of those tested.

This helped explain why I was never able to think of people as "us and them." Since I was little, I never understood when grown-ups talked about "blacks and whites" or "commies and Americans." I don't identify people as groups, because I see each person as a distinct face. A baby. A mom. A dad. A brother, sister, aunt, uncle, grandma, grandpa. A friend.

People of other ethnicities do not, as the saying goes, "all look the same to me." I am only able to see what makes each one unique, face-wise. And somehow, in my head and heart, that immediately links to what makes them loveable.

I truly don't mean to sound like a Coca Cola commercial here — some musical utopia of happy faces in a Woodstockian field of waving grain — but this is how my brain, and thus my body and spirit, relate to others. To me, there is no such thing as a "faceless horde."

They say that no two snowflake are the same. Well, to me and my quirky brain, that goes for faces, too. When I met my identical-twin cousins, Sam and Jack, I knew right away who was who. Yes, they look nearly alike, but what jumped out at me first were their differences.

And here's the intriguing part. What if this is how God sees us? What if this is a glimmer of how there can be billions of us humans, but each one of us is unique and special in God's eyes?

Because, when I see your face, I not only file it for perpetuity, I instantly wonder about who loves you, from when you were born, and onwards. Because somehow, when I see you, I sort of immediately love you as a person, but only in a non-creepy, I-promise-never-to-stalk-you sort of way.

Just think about how much greater it must be for God, who unconditionally adores us, and who is also probably not so concerned about the stalking thing?

My husband says that I remind him of his Mom, in that "she never met a stranger." He says she would get in line at the grocery store with a bunch of folks she had never met, and they would all come out of the other side of the check-stand as friends.

That is a great compliment, and I hope it is true.

What I do know is that my brain's inability to see you as nobody means I always understand that you are somebody. Somebody to someone, if only to God. No matter who you are or what you do.

For example, I have long described myself a "bigot about bigots," meaning I just don't understand how people can be such haters. Even if I meet a white supremacist, full of righteous rage against many groups — including me, one of those "bleeding-heart liberal Catholics" — I don't seem to be able to hate her back.

When I look at her face, I know what she looked like as a baby and what she is going to look like as an old person. She may not see me, because she seems to be only envisioning aspects of the group into which she lumps me, but I see her.

And sort of like Oscar Wilde's The Picture of Dorian Gray, I also see the telltale signs of what her choices have done, will do, to her. I see that the only person she is hurting with her hate is ultimately herself. And all I wish for her is to find some compassion. For others, yes. But for herself, too.

Since hate has to be learned, I have to come to consider haters as having a type of acquired face-blindness. How hard must it be to see only strangers out there? How angry and lonely must that feel? How detached from that first moment when we looked up into a face that adored us, that wanted not only for us to survive but to thrive? And, perhaps even more distant from that most understanding and loving face, the doting visage of God?

In a time of great divides, it is comforting to me that we share this Book of Faces. So, regardless of what the cool kids are doing now, I am going to stick with it.

People | Loving the world, one face at a time

Jesuits across Canada plan to rejoin into a single province