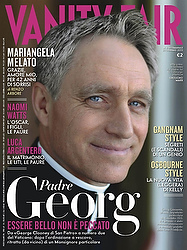 LA documents release: A priest's confession, a man's relief. When Damian Eckert read his former choirmaster's 'sexual autobiography,' part of a court-ordered release of church files, it was a cathartic experience.

NPR's Series on Non-Believers: Today: After Tragedy, Nonbelievers Find Other Ways To Cope and Yesterday: More Young People Are Moving Away From Religion, But Why?

Archbishop Cordileone in London for meetings on Anglican liturgy

Radio interview about the life and work of Fr. Thomas Berry