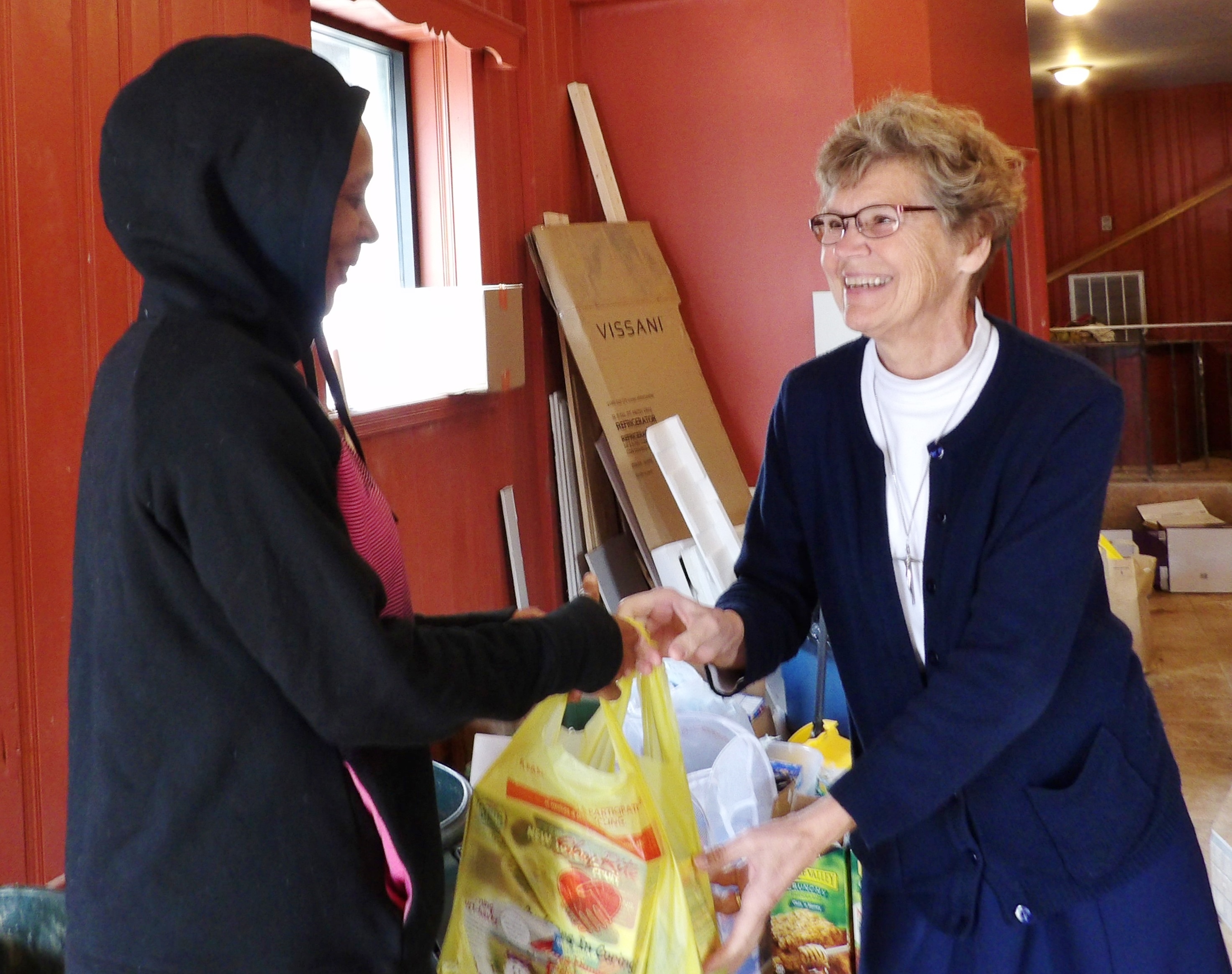 There is no zone of piety around the Mother of Mercy House mission on East Allegheny Avenue in the K&A (Kensington and Allegheny) section here.

Here's the scene on a recent cold April spring morning: A few doors down, customers knock on a window, and for 75 cents apiece, purchase single cigarettes. Business is brisk. On the street, all sorts of wares are for sale, including a man selling knockoff basketball sneakers. Another smokes marijuana in a doorway as a quiet group that eventually swells to 36, representing 126 people in impoverished families, line up for grocery bags and bread.

Fr. Joseph Devlin, Fr. Liam Murphy and Immaculate Heart of Mary Sr. Ann Raymond Welte, the three leaders of the storefront mission, want to be where the action is, and in Kensington there's plenty.

"The exciting thing is that we are starting something that didn't exist; we are creating it," Devlin said about the mission, located at what was a former tavern, noted more for its raucousness than the haven from the streets it has now become.

At the mission, there is daily Mass (but not on Sundays -- organizers stress that Mother of Mercy is not a parish church); food distribution; support groups for alcoholics and drug addicts in recovery; and a Spanish prayer group.

All echoes of Pope Francis, who came to this city last fall with his message of the need for pastors to smell like the sheep and view the church as a field hospital for the wounded. (With the help of a planned $250,000 endowment, the mission may literally become that, as a local Catholic doctor puts together a neighborhood health facility.)

The presence of the mission is "to remind the people of the neighborhood that the church has not forgotten them," Murphy told NCR.

That message has been particularly needed in this city. The archdiocese has closed dozens of churches in the past 10 years, many in downtrodden sections like K&A. A few blocks away, in a neighborhood filled with ramshackle row houses, the ghost of Ascension Church towers over the neighborhood. Once a thriving neighborhood institution, it is now shuttered.

The mission began last summer after Archbishop Charles Chaput, at a priests' conference, expressed a need for continued ministry in troubled urban areas that did not require the huge upkeep of large churches for which Philadelphia is famous. Listening were Devlin and Murphy, who, inspired by the idea, put in to volunteer to work a mission storefront.

They received startup funding from the archdiocese and Chaput's blessing. The goal is to one day be self-sufficient.

The K&A neighborhood lacks many amenities, yet it was perfect for this experiment in mission. Located in the second-poorest congressional district in the United States, the area is known throughout a rough city for its peculiar dangers and temptations. The mission includes prayer, but also upfront charity. The priests and the sister had no preset agenda, other than to be of service and to provide spiritual sustenance. The priests live above the storefront mission.

The trio is learning about what the people of Kensington experience. They are seeking new quarters after their landlord raised the rents, a not-infrequent occurrence.

Late last summer, a sewer line broke in the building. The stench was overwhelming. Mass moved out to the sidewalk, another chance to witness in the neighborhood. Holy Week services were held on the street this year.

"These are people who are so needy, you can't be just here for the sacraments," said Welte. She was a former missionary in Peru and Chile; here, she says, the poverty is extreme, with the difference being that the people in Kensington are well aware that they live within a short train ride to the wealthy Main Line suburbs and the gentrified Center City.

Offering daily bread is a necessity. At the end of March, as food subsidies ran out in the neighborhood, the mission fed 65 families and 200 people. In a decidedly low-tech approach, Murphy writes out the names in a notepad, after greeting food seekers with a friendly hello in English and Spanish. Devlin does the packing.

Their hungry flock appreciates the help.

Patrick, accompanied by his nephew, said the food is needed because his nephew's wallet had been stolen and he has no identification to get food stamps. At 64, Patrick is retired and has diabetes, and his house was damaged by a fire. Other people in the grocery line describe struggles with disabilities and other issues.

Besides immediate food concerns, there are long-term health issues.

Dr. Francis McNesby, a friend of the mission, envisions a health care facility operated by doctors and nurses who pray before the Eucharist every day before going on their rounds. A Drexel University pediatric medicine professor and a physician at nearby St. Christopher's Hospital, McNesby is inspired by Francis' vision of the church as a Field Hospital. He takes the metaphor literally.

"He wants us to heal the wounds," said the doctor.

Right now, the vision remains just that. Today, the mission can only offer food, friendly greetings and prayers.

The prayers are appreciated. This day, the tiny chapel is filled with more than 25, seated on auditorium chairs around an austere altar. Included are a group of Latino ladies (the Mass is frequently bilingual); a contingent from an addiction recovery program in the neighborhood; and volunteers from the suburbs and other Philadelphia neighborhoods who deliver food.

The mission hopes to grow the volunteer network. Its Facebook page attracts about 700; another 250 get an email newsletter.

The Gospel for the day is John's version of the loaves and fishes. Murphy reminds them in his homily that little miracles of food sharing happen every day in Kensington. Keep it up, he encourages the congregation.

"What Jesus did 2,000 years ago he is still doing," said Murphy. "We now have to go out and nourish, to keep the miracle going."

Editor's note: "The Field Hospital" blog series covers life in U.S. and Canadian Catholic parishes. The title comes from Pope Francis' words: "I see the church as a field hospital after battle. It is useless to ask a seriously injured person if he has high cholesterol and about the level of his blood sugars! You have to heal his wounds. Then we can talk about everything else." We can send you an email alert every time The Field Hospital is posted. Go to this page and follow directions: Email alert sign-up.