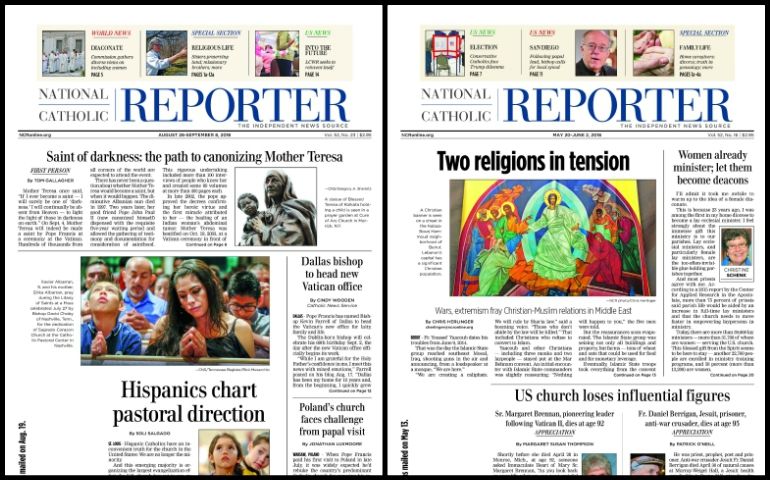 Quebec City — Teamwork was much on display in the 31 awards garnered by National Catholic Reporter and Global Sisters Report at the 2017 Catholic Media Awards announced June 23 during the annual Catholic media convention.

A good example of this teamwork is seen in the First Place Award in the Best News Writing on a National or International Event category. The award is for a series of articles that began with a breaking news story from our Vatican correspondent, Joshua J. McElwee, that Pope Francis was creating a commission to study question of women serving as permanent deacons. After the news broke, Elizabeth A. Elliott and Traci Badalucco, working from our Kansas City, Missouri, office, gathered reactions to this news. Over the course of several weeks, McElwee did additional reporting about the makeup of the commission and its members' views.

It was that full packet of reporting that the Catholic Press Association judges awarded.

In the much-coveted Best Newspaper of the Year category (formerly called "General Excellence"), NCR tied for third place with Our Sunday Visitor in the national newspaper category. The top spot went to National Catholic Register. Second place went to the Canadian newspaper Catholic Register. Honorable mention was given to Catholic Health World.

Of special note is the first-place showing for Best Spirituality Column for NCR's Soul Seeing column, which is edited by Michael Leach. Soul Seeing has earned that place five years in a row.

NCR's layout editor Toni Ann Ortiz was recognized with two awards: Second Place for Best Front Page for a Tabloid (the judges called Ortiz's work "elegant" and "classy") and First Place in the Best Layout of Article or Column category for the layout of Sr. Rose Pacatte's review of the film "Ben Hur."

A number of awards went to Elliott and Badalucco, both of whom were NCR Bertelsen interns in 2016. The work of another intern, Kristen Whitney Daniels, was also recognized.

Also deserving of special note is Claire Schaeffer-Duffy's two-part investigation into the unsolved murders of Xaverian nuns in Burundi, which the judges called "a top-notch investigative story." Schaeffer-Duffy has won CPA recognition for her investigative work before. She was honored in 2015 for her reporting on gun sales on the U.S.-Mexico border.

Schaeffer-Duffy's award is also of note because it illustrates the importance of Global Sisters Report, the 3-year-old reporting project supported with a grant from the Conrad N. Hilton Foundation, to NCR's overall journalistic enterprise. GSR staff members and contributors earned five awards in various categories.

Women Deacons?: Essays With Answers, a book from Liturgical Press edited by NCR columnist Phyllis Zagano, took the first-place award in the gender issues category of in the annual Catholic Press Association Book Awards also announced June 23. The judges said, "Zagano offers a deep understanding of the lost roles of women deacons in the church. ... She and her colleagues make an excellent case for the reestablishment of the diaconate for women."

NCR columnist Heidi Schlumpf earned a second-place award in the biography category for her book Elizabeth Johnson: Questing for God, part of Liturgical Press's People of God series of biographies. The judge's comment said, "After reading this wonderful little volume, I have an even more profound respect for Elizabeth, not only as a theologian but perhaps even more as a woman of faith."

Below is the listing of CPA awards going to National Catholic Reporter with notes provided by the judges. I have inserted notes to identify the writers and contributors from Global Sisters Report.

This blog does a good job drawing connections between current events and political debates and the true values of Catholicism. "Morning briefings" make sure their regular readers always have access to a quick and digestible recap of important current events. Strong messages of understanding, community engagement, and fighting against fear and hate. There are a few very strong political messages and some harsh language that may upset some readers, but overall quality is high and the content very powerful and timely.

Compared to other blogs, this one has much more variety in content. The content was personal, yet applicable to a large audience.

Since the nature of the blog is to be political, they are generally very timely articles. There is some strong variety (e.g. posts about his father's life, updates on the Pope, etc.). The blog was bold and did not shy away from difficult topics.

In a series of articles on the developing "conversation" on women and the diaconate, the NCR has provided a historical and theologically sound look at the topic with all its divergent views. Clear and crisp writing lays out not only what is happening but reasoning behind the exploration into this possibility. Informative quotes and arguments flesh out the stories.

A top-notch investigative story on the unsolved murders of Xaverian nuns in Burundi. Excellent reporting, including on-the-ground in the African country, which has proven dangerous at times for journalists. Excellent use of a variety of sources. Powerful quotes mix with descriptive narrative to provide a high-quality investigative story. 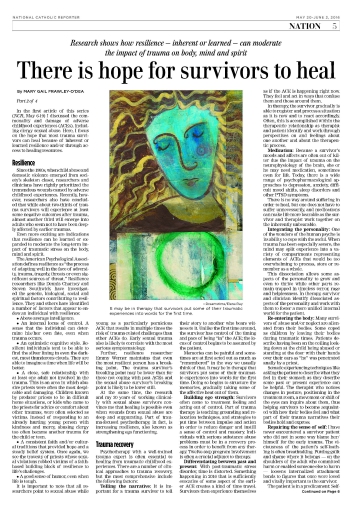 Packed with psychological research, statistics and resources about the lasting effects of child abuse. Written by a psychologist who has treated sexual-abuse survivors for 30 years, it is both unflinching in its willingness to confront the problem and encouraging of those seeking help.

Series incorporates original reporting from Ghana and Honduras into dramatic narratives showing the effects of illegal mining on workers and communities. While the stories explain the economic context for the mining operations, the spotlight is on the harmed individuals who have the opportunity to tell their own stories.

Thoroughly researched and presented, this argument to ban the use of cluster bombs posits political, moral, and religious reasoning in a compelling and informative way.

Gave plenty of the writer's perspective without going too far. Nice piece looking back on the themes, staying power and influence of an older movie. A challenging, competitive category and these reviews were a pleasure to read.

A very challenging category. Each of these columns made a strong connection, and that's challenging to do with such a diverse group of topics. Well written, edited and executed. Sophisticated.

Second Place, National Catholic Reporter, "Prison reform is a pro-life — and political — issue"; "To my son on his first Communion day"; "Love your neighbor — yes, your actual neighbor" by Heidi Schlumpf

N16b: BEST USE OF ART OR GRAPHICS: Best Original Illustration

First Place, National Catholic Reporter, "How many Jesuits does it take to change a light bulb?" by Pat Marrin (right)

Insightful writing sets this section apart, especially the photojournalist effort to show women as they are and the joyful excitement of a mom as her 17-year-old son with autism receives his first Communion. And the answer to homelessness? Why beans, of course. You'll have to read the story to unravel that one. An outstanding section.

Compelling stories with fine writing. The anecdotal leads are well done and draw the reader into interesting stories. Photo of Iraqi refugee family is striking. Gripping reports of children escaping smugglers at the last moment. Good overall coverage of refugee crisis overseas and on and within our borders

A variety of well-researched stories that covered editorials, the arts, world issues and a variety of international story topics. The paper design includes a good use of color and original reporting.

N46b: BEST COVERAGE OF VIOLENCE IN OUR COMMUNITIES: National newspaper or wire service

Excellent, comprehensive news coverage that supplies information and perspective to the audience.

The authors combine depth and breadth in research paired with a healthy dose of strong human interest in the pro-life coverage of this publication. A wide range of topics covering multiple aspects of Catholic social teaching offers readers the chance to consider the "seamless garment of life" in all its aspects informing attitudes and moral decision-making.

A richly detailed interview with Democratic vice-presidential candidate Tim Kaine anchors a series with confident writing, deep reporting and unique angles on election issues. The panel of Latino Catholics provides insight into how an important bloc of voters chose their candidates.

Keying off concrete events, these well-written and researched stories offer insights into ways in which people of distinct faith traditions but shared values can support each other and "think outside the box." 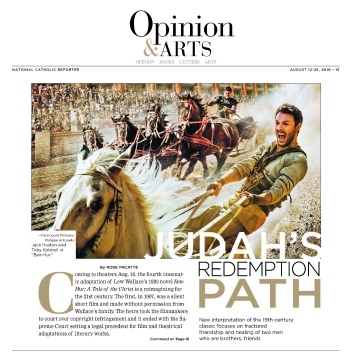 A strong opening image combined with effective typography for the head and deck make this design a winner. The second page is simple, clean and effective, albeit not as energetic as the first page. Still, the total package makes for a successful design.

This news-driven story reports a decline in U.S. executions and a drop-off in public support for the death penalty, based on 2015 research. In clear and precise language, it traces the history of capital punishment and gives a thorough overview of recent moves by states to abolish the practice.

N54e: BEST REPORTING OF SOCIAL JUSTICE ISSUES: Dignity and Rights of the Workers

Survivors of the collapse of the Rana Plaza garment factory and the fire at the Tazreen Fashions factory, both in Bangladesh, and those who lost family members, describe the lasting effects of the tragedies. In addition to sharing their compelling testimonies, the story analyzes the competing agendas in Bangladesh — the country badly needs the garment industry to keep its economy afloat, but the human toll has been tremendous.

Reporting the perspectives of adjunct faculty members, university administrators and labor experts, this story skillfully analyzes the unionization drive at Seattle University. The article takes a balanced approach, weighing the university's argument that the National Labor Relations Board would harm the school's Catholic mission against the views of some labor experts and academics that protecting the rights of workers is an important component of Catholic social teaching.

The story describes the efforts of Human Thread, a Catholic advocacy group, to encourage Macy's and Kohl's to stock their stores with fair-trade clothing options. The story clearly describes the goals of the initiative and incorporates a broader perspective, referencing disasters in the Bangladeshi garment industry and drawing on Pope Francis' comments on labor conditions worldwide.

The story takes a global perspective on how Catholic communities are implementing the guidance of Laudato Si'. Examples from Africa to Brazil to the Philippines to the United States demonstrate a worldwide commitment, including a willingness to address difficult issues, such as divestment from fossil fuels.

[Dennis Coday is editor of National Catholic Reporter. His email address is dcoday@ncronline.org.]