No dinosaurs with pink feathers, but questionable ethics in ‘Jurassic World’ 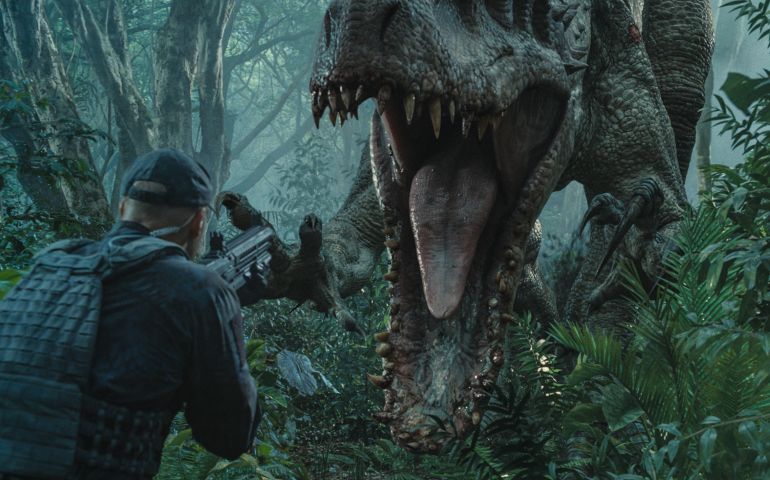 The Indominus rex readies her attack in “Jurassic World."

“Jurassic World,” which hits theaters Friday, is the fourth film in the franchise based on the original 1990 novel Jurassic Park by the late Michael Crichton. The first film, “Jurassic Park,” was released in 1993. It told the story of John Hammond (Richard Attenborough), head of InGen, a bioengineering company, who created a theme park with cloned dinosaurs on an island off the coast of Costa Rica.

The dinosaurs were cloned by using DNA extracted from their blood found in mosquitoes that were preserved in amber. Because the DNA strands were not complete, the DNA of frogs was spliced in, and voila! Cloned dinosaurs.

Things did not end well when the dinosaurs, all cloned as females so they would not breed, start breeding, because like West African bullfrogs, they can change gender in a same-sex situation. Two Velociraptors attack the people still on the island but the Tyrannosaurus Rex kills them and the people escape. The paleontologist, Dr. Alan Grant (Sam Neill) had a theory that dinosaurs share DNA with birds, not frogs, which is why Jurassic Park fails — at least for a while. Questions about the ethics of genetic engineering and messing with nature abound.

Now 22 years later, Jurassic World is a thriving theme park, with 20,000 visitors daily. Claire Dearing (Bryce Dallas Howard) is the highly focused career-oriented park operations manager who is all about the numbers, profits, and stock shares. Owen Grady (Chris Pratt), a former Navy man, is the Velociraptor trainer. Simon Masrani (Irrfan Khan) of the Masrani Corporation owns the park that reflects the dream of John Hammond. Vic Hoskins (Vincent D’Onofrio) is the head of security for InGen that still clones the dinosaurs for the park. The lab is still headed by the chief geneticist Dr. Henry Wu (BD Wong).

And because Simon told Wu to make something bigger and better to keep people coming to the park (because the young people are getting bored), he and the technicians create a dinosaur hybrid, Indominus rex (so named because it is easy to pronounce) by splicing together the DNA of four other dinosaurs: the Giganotosaurus, Rugops, Majungasaurus, and Carnotaurus.

When Indominus rex escapes the paddock the action really begins.

At a press event June 9, held fittingly in the Dinosaur Hall of Natural History Museum of Los Angeles, the renowned paleontologist Jack Horner, who served as technical advisor to all the Jurassic Park films, talked about the science in the current film.

He explained that the dinosaur skin and colors, for example, were probably not as depicted in the film but were probably more colorful because of feathers, like the birds with which they share DNA. While he would have liked them to be more realistic, the current depiction needed to be consistent with the original film and pink feathers on dinosaurs, while possible, would probably not be acceptable to the audience.

On the wall of the museum it says, “From dinosaur skeletons we know that they were once living breathing animals much like us.” But when Horner addressed what dinosaurs actually sounded like, he admitted that we really don’t know. Because they are related to birds, their sounds were probably high-pitched but the bigger the dinosaur, the lower the sound. Regardless, the dinosaur sounds in the film are imagined.

Horner also said that despite the premise of the film, no one has ever found dinosaur DNA though some protein has been discovered. DNA could never have survived for the millions of years that have passed since dinosaurs roamed the earth. In fact, DNA would be degraded after 6.8 million years.

This has not stopped scientists from trying to bring back the dinosaurs, however, along with other prehistoric extinct species — including the woolly mammoth.* Scientists believe it is possible to sequence its genome because it became extinct less than 100,000 years ago. And they think they can insert mammoth genes into elephant genes and create a species, something like a “hairy elephant” according to The Telegraph. If they can do this, the animal will have a home at the Pleistocene Park in Siberia, the closest anyone has come to the idea of a Jurassic Park anywhere.

While not cloning, this transgenetic engineering process is not new. Horner mentioned the “dino-chicken” that biologists created by turning on ancestral genes in a common chicken, resulting in embryos having dinosaur-like beaks (in other words, tinkering with genetic proteins and molecules). I asked Horner if these dino-chickens were bred and made their way into the wild what would happen. He found this amusing and said if they laid eggs they would be ordinary chickens, not dino-chickens. He said the purpose of the dino-chicken experiment is not to clone dinosaurs, but to advance research that could have medical implications such as re-growing vertebrae to heal injuries. I found his answer amusing because what is to stop any of this scientific research from going beyond its original intention?

Ethical questions abound in “Jurassic World” and they are about more than science. Tampering with nature has its limits, and the people running Jurassic World have not learned from their own history. Now scientists are engaged in hardcore transgenetic processes for the sake of profit and entertainment that includes a dinosaur petting zoo and rides, gift shops selling toys and replicas of dinosaurs along other theme park paraphernalia, product placement and corporate sponsorship logos, in addition to creating the hybrid monster, Indominus rex.

Then, add the law of unintended consequences because Vic is planning to channel Owen’s work of taming the Velociraptors for military purposes. With its focus on money and the military, I’d say “Jurassic World,” while a huge entertainment for profit itself, is a paradox that asks some compelling questions.

At one point, a frightened, no terrified, Simon commands Wu to follow the ethics of the corporation, and it is obvious no one knows what those ethics are, not even Simon.

“Jurassic World” is about evolution in a test tube in a lab run by a corporation for profit with military application of the “assets.” What comes next is anyone’s guess.

*This sentence was clarified from an earlier version.

Culture | No dinosaurs with pink feathers, but questionable ethics in ‘Jurassic World’

Empathy for the devil: The appeal of 'House of Cards'

The 'first couple' in story and film