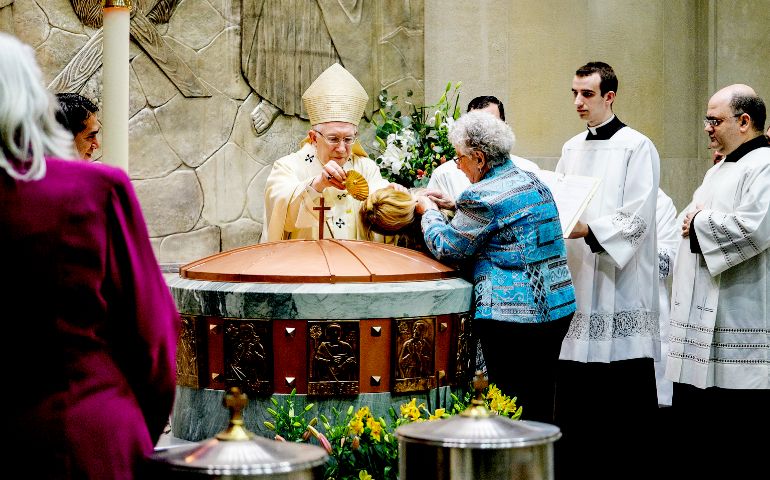 Archbishop Leonard Blair of Hartford, Conn., baptizes a young woman during the 2015 Easter Vigil at the Cathedral of St. Joseph in Hartford. The archdiocese recently announced plans to close and/or consolidate up to 100 parishes. (CNS/Bob Mullen)
This article appears in the The Field Hospital feature series. View the full series.

The archdiocese of Hartford, Conn., plans on closing and/or consolidating up to 100 parishes. A familiar story in the Northeast: fewer Catholics, fewer priests, too many buildings.

Parishes in Vermont plan on celebrating 2017 as a Year of Creation. Meanwhile, a Canadian diocese tells its parishes not to use bottled water in response to Pope Francis' ecological emphasis.

A struggling parish in Toronto is bolstered by its ministry to Vietnamese Catholics.

Jim Schwai of St. Theresa Parish in Eagle, Wis., reports that a group from his parish, along with St. Joseph Parish in Wauwatosa, will be traveling to Punta Gorda, Belize, in the last two weeks of January. There, they will assist the people of St. Peter Claver Parish on a number of construction and education projects. Parishioners from the Wisconsin parishes have been visiting Belize since 2006 as part of a mission twinning project.

Catholic parishes in San Francisco join together in a march for immigration reform and global justice.

St. Meinrad Seminary in Indiana has received a $1.38 million grant from the Lilly Foundation to develop outreach to young adults. They will be working with area parishes. St. Meinrad is located in the Indianapolis archdiocese.

Parishioners defend a Florida pastor accused of taking financial advantage of an elderly parishioner. They say the priest has been unfairly maligned because his parish became the beneficiary of a generous wealthy parishioner who freely gave away her money.

A gay man is forbidden from singing at his grandmother's funeral at a Catholic parish in Indiana.

Parishioners were surprised to find out recently that some church parking lots in Western Pennsylvania provided no sanctuary. Thieves have regularly broken into cars while parishioners attended Mass. In some cases, stolen credit cards were used before Mass ended. Two have been charged in Westmoreland County.