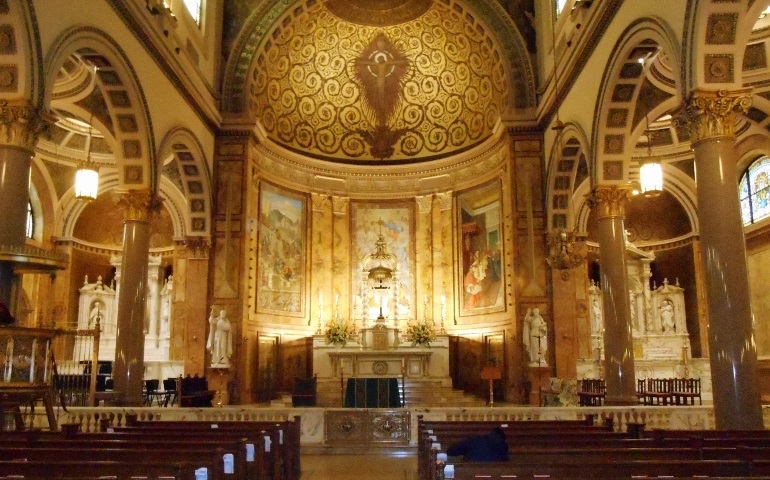 Get to know a parish! (Apologies to Stephen Colbert.) This week: St. Ignatius Loyola, on New York City's Park Avenue, which last week celebrated 150 years of being a Jesuit parish.

If you are a Catholic celebrity and a New Yorker, odds are that you will be buried out of St. Ignatius Loyola, located on the Upper East Side (that is, if you don't get a St. Patrick's Cathedral farewell). The church, built to model the Gesù Church of the Jesuits in Rome, was the site of funerals for Jacqueline Kennedy Onassis, singer Lena Horne, actor Philip Seymour Hoffman and former New York Gov. Mario Cuomo.*

Still, there is a parish life that goes well beyond celebrity funerals.

While a territorial parish, St. Ignatius attracts parishioners from all over for its varied programs, music and preaching (including, at weekend liturgies, famous Jesuits such as author/speaker Fr. James Martin). One parishioner makes the trek from Connecticut on weekends, while others come from New Jersey.

The parish is known for its music, including a pipe organ, installed in 1993, the largest in New York City. St. Ignatius Loyola Church is located amid a 3.5-acre Jesuit complex on the valuable real estate of New York's Upper East Side, including two high schools, Regis and Loyola School, which operate independently from the parish. The parish runs an elementary school, a St. Vincent de Paul program, and well-attended programs for teens and young adults. For the graying set, there is "Boomers and Beyond." A social justice committee educates and advocates on hot-button issues, such as homelessness and human trafficking.

St. Ignatius Loyola boasts 4,300 registered families. The 11 a.m. Sunday Mass is actually two liturgies: one upstairs in the main church, where some 1,100 regularly attend, and a family Mass downstairs in the parish hall, attracting some 300 parents and children.

The parish has attracted "the titans of industry to day laborers," said Jesuit Fr. Dennis Yesalonia, the 35th Jesuit pastor of St. Ignatius, installed in that post this year. An attorney and New Jersey native, Yesalonia spent most of his Jesuit career in college administration at the College of the Holy Cross in Worcester, Mass., and at Boston College. This is his first pastor assignment.

The parish dates 15 years before the Jesuits arrived. It was originally named St. Lawrence O'Toole Church in 1851. In the early part of the parish history, the Upper East Side was just developing and, known as the Yorkville section, was soon filled with tenements. The current Upper East Side, known for its pricey real estate, developed after an elevated train line was put underground, making the neighborhood attractive to New York's movers and shakers. The parish church is near both Central Park and the Metropolitan Museum of Art.

Jesuit influence pervades the parish, seen in the mottos adorning the church and found in the regular series of lectures on theology and spirituality sponsored by St. Ignatius. "It's just who we are," said Yesalonia.

The celebration activities held this month fostered this strong Jesuit connection. Included was a concert featuring the music of 18th-century Jesuit Domenico Zipoli, offering pieces from the famous Jesuit missions of Bolivia and Paraguay, combining European and Native American sounds. Another event, a lecture by Jesuit Fr. Tom Lucas of Seattle University, traced the parish's place in the history of Jesuit urban parishes around the world.

Parishes are learning how to reach out to those who are victims of domestic abuse.

Is the Catholic church welcoming to gays? Diocesan and parish practices are examined in light of Pope Francis' welcoming statements. Confusion reigns.

Had enough of this election? The Knights of Columbus urge you to pray over it.

Black Catholics look to social media to promote sainthood causes in preparation for a national conference.

*This sentence has been corrected to remove the name of a person whose funeral was not held at St. Ignatius Loyola.