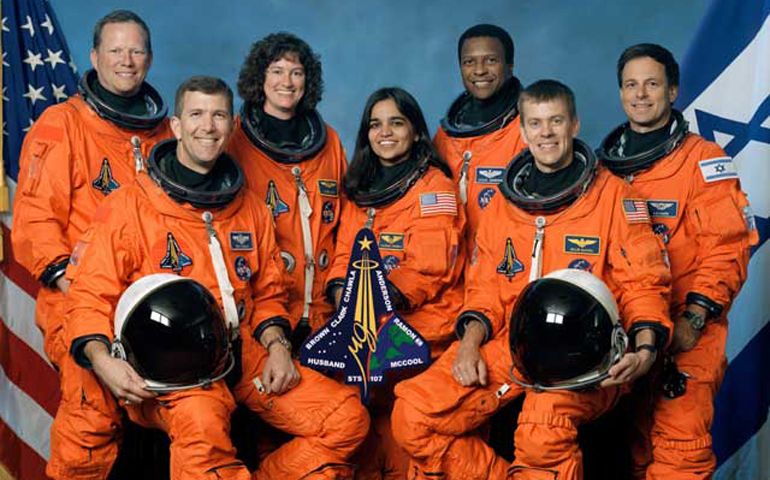 PBS always has something interesting waiting in the wings. This week, it will broadcast a trifecta of significant documentaries.

Of all the films I have seen from PBS's Independent Lens series, "The Revisionaries" is the most unsettling. It confirms what I have heard and read over the last few years about the influence of fundamentalist Christians in public education through the narrow focus of creationism, or religious belief, over science and the theory of evolution.

As public school textbooks go in Texas, so they will go in the rest of the country. Why? Because of the sheer quantities: Five million school kids represent a lot of money for publishers, and they don't want to publish different editions for various states. Every 10 years, the Texas State Board of Education convenes to write, change or revise textbook standards. The state of California also influences educational publishers, but not to the extent Texas does.

In "The Revisionaries," director Scott Thurman follows four people involved in the Texas State Board of Education over three years. The main one is Don McLeroy, a dentist, Sunday school teacher and an "avowed young-earth creationist," as he leads the effort to amend the science, social studies and history curriculum of Texas students from kindergarten to 12th grade. His determination to set up a religious explanation for the world as an alternative to a scientific or scientific theoretical explanation for creation in the science curriculum seems to represent the efforts of the majority of board members -- though not all.

Ron Wetherington, an anthropology professor from Southern Methodist University, argues to no avail that science must counter science and that religion or creationism is not a scientific argument. I watched with amazement as the school board voted to remove the topic of institutionalized racism from the social studies curriculum. As one commentator says, the dominant school board members evidence "arrogance and ignorance" as they pick and choose what to include or exclude in public education. If this documentary is to be believed, its contents are nothing less than astounding and provocative.

This two-hour film documents the life and influence of automaker Henry Ford (1863-1947). Henry was born and raised on a farm outside of Detroit but felt confined. His parents humored him and let him dismantle watches and engage his fascination with machines instead of working. He became an engineer for Westinghouse, but with the blessing of Thomas Edison invented a quadricycle in 1896. Through various companies he helped form and dissolve, Ford premiered the Model T in 1908. The rest is history.

Henry Ford created the assembly line, and to keep workers, he paid them the unheard of wage of $5 a day. He was also involved in the lives of his workers through social engineering because he always believed he knew best and could teach other people how to live. He obliged immigrant workers to take the English classes the company provided and representatives from the company also visited workers' homes to make sure they observed company standards in the most intimate dimensions of life. If a worker failed to correct something after one warning and the withholding of wages, he would be fired. In the 1920s, this arrogance led Ford to publish a newspaper, The Dearborn Independent, with strong anti-Semitic views, blaming the Jews for social and economic problems. The paper was distributed through all the Ford showrooms until someone sued him for libel.

Ford was an industrialist, a tireless inventor, a fan of auto racing, and one of the wealthiest men in the country. But for all the advances he was responsible for, he became nostalgic for a way of life he helped to destroy by making America mobile. The Model T was inexpensive and popular and freed people who felt isolated by rural life.

The influence of Henry Ford, and by extension his son, Edsel (1893-1943), continues in our consumer culture of abundance, leisure and prosperity today, where the system of standardized mass production -- that is, the innovation of "Fordism" and "planned obsolescence" -- are virtually unquestioned by consumers as we pile up the stuff we work to produce and then purchase.

Sarah Colt wrote, produced and directed the documentary, and Jesuit Fr. John Staudenmaier, a professor of history of the University of Detroit Mercy, is one of the experts featured in the film.

On Feb. 1, 2003, the seven astronauts aboard the space shuttle Columbia perished upon re-entry to the earth's atmosphere. This documentary film by director Daniel Cohen commemorates the 10th anniversary of this tragic event by telling the story of Ilan Ramon, the first Israeli astronaut and payload specialist on the mission.

Ramon was an Israeli fighter pilot who took part in Israel's surprise attack on Iran's unfinished nuclear reactor in 1981. Although the United States officially condemned the attacks, President Ronald Regan said when informed of the event, "Boys will be boys." But this is the only overtly political aspect of "Mission of Hope." Once Ramon, a husband and father of four, was selected to train as an astronaut, we see him as a member of a team -- indeed, a family. The astronauts participate in leadership training, and as the time draws closer, Ramon chooses what he will take on the flight with him.

Although secular, Ramon's choices reflect the history, experience and faith of the Jewish people as survivors: a mezuzah, a picture of the moon drawn by a teenage boy while in Bergen-Belsen death camp, and a miniature Torah with an amazing story dating back to Germany during the Nazi era. Thirty-seven pages of the diary that Ilan kept as an astronaut survived re-entry and is being painstakingly restored. An unhappy note to this already sad narrative is that in 2009, Ilan Ramon's eldest son, Asaf, became a pilot, but crashed and died three months after graduating from flight school. He was 21. Father and son are buried side by side.

"Mission of Hope" lets us see and meet these seven Columbia astronauts in order to remember them as courageous ambassadors of exploration, science and hope for humanity.

NCR Podcast: Dorothy Day play; Joan Chittister on the state of the nation