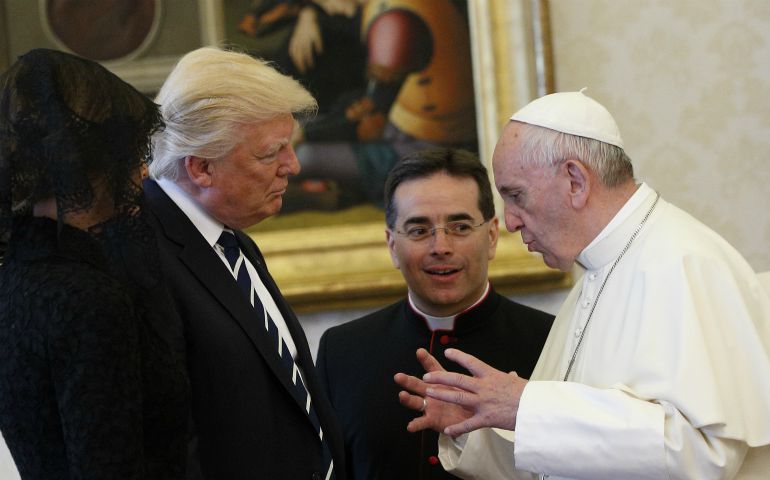 Pope Francis talks with U.S. President Donald Trump, accompanied by his wife, Melania, left, during a private audience at the Vatican May 24. (CNS photo/Paul Haring)

During the presidential campaign, Donald Trump had a few things to say about Pope Francis.

On his trip to Mexico in February 2016, Pope Francis said, "A person who thinks only about building walls … and not building bridges, is not Christian." Donald Trump said the pope was disgraceful for questioning his faith. He also said the pope would be sorry for not supporting him if Francis were to get attacked by ISIS. Trump insisted he would be the one to prevent such an attack if he were president

The much awaited meeting between Pope Francis and Donald Trump has now taken place. They have now met face to face.

Some may have wondered why Pope Francis would even agree to meet with the president. For Trump of course, there was the photo op of a warm embrace with an important religious figure, which did, in fact, happen. For Francis, it is in his nature and position to grant an audience to anyone like the president who requests it. For Francis, Trump is a person worthy of dignity and respect, someone who is valued as a child of God, as are all of us.

We of course know how far apart these two individuals are on so many issues. At the top of Francis' priority list is caring for the poor. Also, Francis is concerned about how we treat strangers in our midst. Fairness and compassion need to be extended to immigrants looking for a better life for their families. The need for health care for all people and for protecting the environment are also high on the pope's agenda.

So what can we glean from what we know of this meeting, and does it have any larger significance?

Joshua McElwee of NCR reports that after a stiff beginning the meeting seemed to end with Francis having a more "jovial" tone. Trump had to be pleased with photos coming out of the meeting showing him shoulder-to-shoulder with the pope.

We do not know what these two men said to each other during their private meeting. We have only the symbols of the gifts they shared. Francis presented to Trump a medallion depicting an olive tree and encouraged Trump to work for peace. He also gave the president copies of his four major writings, including his environmental encyclical, Laudato Si'. Trump promised to read them.

How should those of us feel who see Pope Francis as standing in contrast to some of the worst instincts of this president? Should we feel disappointed? Did we want Francis to lecture Trump on the need to help the poor, provide meaningful health care for all, and show concern for immigrants and refugees? At some level, I think we did hope for something like that. I know I did. Yet it was not really a reasonable or even an appropriate expectation.

Certainly more substantive discussions were held with Vatican Secretary of State Cardinal Pietro Parolin following Trump's meeting with the pope. Yet we don't know the nature of these discussions either.

I think the importance of this meeting will play out in the weeks and months ahead. Donald Trump said to the pope at the end of the meeting, "I won't forget what you said." On Francis' part, I believe he continued to do what he has done since the beginning of his papacy. He preached the Gospel.

Both men conducted themselves as appropriate in a meeting between two heads of state. But there can be no doubt that Francis made clear what he believes. He will continue to do that in the weeks and months ahead. Was President Trump moved by the meeting? Will it have an impact on him and his behavior? Only time will tell.