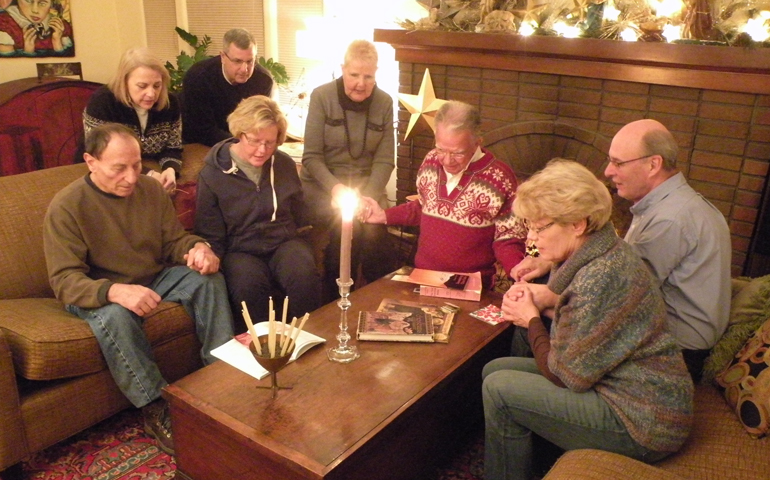 Participants in the ARISE Together in Christ program from St. Jude Parish in Fort Wayne, Ind., gather for one of the fall session meetings. (Francie Hogan)

In the early, heady days post-Vatican II, enthused Catholics flocked to movements such as Cursillo, Marriage Encounter, and the Christian Family Movement, often spending weekends away to return home with a zeal to spread the Gospel and transform the church and the world.

Msgrs. Tom Kleissler and Tom Ivory, two New Jersey priests, wondered: Why not bring that energy to parishes? And so was born RENEW, now RENEW International, begun 38 years ago and still active decades later, through small groups designed to energize parishes around the U.S. and in Canada, South Africa, Australia, Venezuela, El Salvador and Guatemala, among other countries.

RENEW, said Dominican Sr. Theresa Rickard, RENEW president, was "a movement organized in the parish, not outside. Movements are great, but there is something about a parish which means 'here comes everybody.'" In that, she echoed Irish writer James Joyce's statement about the reach of the Catholic church.

Begun here in the Newark archdiocese, where participation reached 40,000 in its early years, RENEW relies on small groups, where Catholics come together, pray, reflect on the Scriptures, and, it is hoped, are inspired to act in their world to bring the Gospel to the poor and the left behind.

Headquartered in a former convent, RENEW is a not-for-profit corporation, supported by donations, sales of its books and materials, as well as fees charged to parishes and dioceses. RENEW materials, including books, Scripture guides and videos, have been translated into Spanish, Chinese, Haitian Creole, French, Lithuanian, Burmese and Vietnamese.

RENEW is getting a boost in the Pope Francis era, as the church is now led by a Latin-American familiar with small communities in parishes intended to break down anonymity and to inspire social action.

RENEW has always had a Spanish-speaking component and a focus on developing lay leaders, particularly women. One Filipino community on Long Island, New York, has been involved with RENEW for 25 years. New RENEW programs include ongoing groups for those who wish to engage Pope Francis' teachings on the environment and social justice. Other programs focus on developing everyday spirituality for Catholics in parishes, offering "faith sharing," including reflections on the Scriptures. Be My Witness is a program in English and Spanish focusing on evangelization. The organization is also the sponsor of Theology on Tap, a program of faith discussions held in restaurants and taverns and geared to young adults.

Dioceses engaged with RENEW cut a wide swath, including Newark; Brooklyn, N.Y.; Joliet, Ill., and San Angelo, Texas. The organization claims to have reached 25 million Catholics in 160 dioceses in the U.S., as well as overseas.

Betsy Koval, religious educator at two parishes in the Diocese of Lansing, Mich., told NCR that RENEW has made a significant impact on both churches where she ministers.

"It's a new thing but it catches on," she said about the 38 small faith-sharing groups at Queen of the Miraculous Medal Church in Jackson, Mich. "People are coming together and being open about their faith."

Small groups, she said, provide a way for people in a parish to get to know one another, beyond social events. "As they get more confident with each other, they can talk about their faith more," she said.

At Our Lady of Fatima Church in Michigan Center, a RENEW program geared for children is part of the religious education program.

Participants in the parishes are using RENEW's ARISE Together in Christ program, which integrates Scripture readings, prayer and time for discussion. One component is to move participants beyond group activity to some form of social action.

Vicki Niswonger, a parishioner at Corpus Christi Parish in South Bend, Ind., said RENEW has been active there for the past three years. Why Catholic? is a RENEW program which has garnered support from the local Fort Wayne-South Bend diocese. As a result of RENEW participation, the number of volunteers from the parish serving in a local shelter has spiked.

Niswonger said she's found that RENEW continues to make a quiet, yet vivid, impact on her spiritual life.

The busy mother, wife, grandmother and parish volunteer said she is now more comfortable with contemplation. "I realize the importance of prayer, sitting down in a chair and reading the Scriptures," she said.

Editor's note: "The Field Hospital" blog series covers life in U.S. and Canadian Catholic parishes. The title comes from Pope Francis' words: "I see the church as a field hospital after battle. It is useless to ask a seriously injured person if he has high cholesterol and about the level of his blood sugars! You have to heal his wounds. Then we can talk about everything else." We can send you an email alert every time The Field Hospital is posted. Go to this page and follow directions: Email alert sign-up.