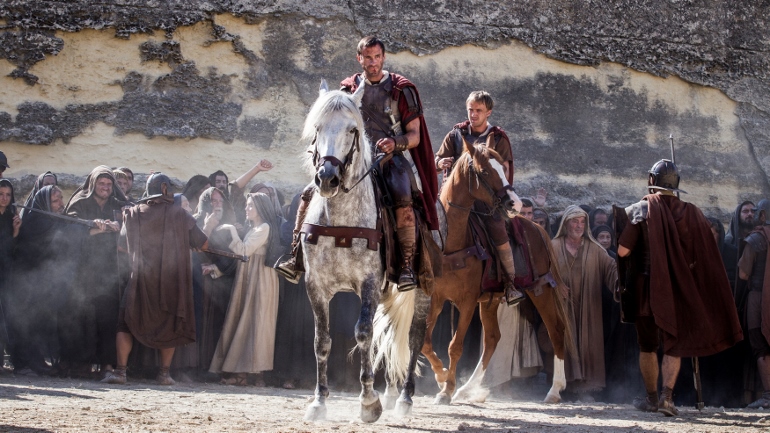 Joseph Fiennes and Tom Felton star in a scene from the movie "Risen." (CNS photo/Columbia Pictures)

This new biblical epic is focused on the resurrection and billed as "the most important manhunt in human history." It is a simple yet majestic telling of the Easter story. It's grand yet intimate. Seen through the eyes of one man, it is set in Palestine in the weeks following Jesus' crucifixion in the year 33 A.D. It features a battle-weary Roman military tribune named Clavius (Joseph Fiennes) who has served in the Roman army for 25 years. In the confusion following rumors of the resurrection of Yeshua (Cliff Curtis), Pontius Pilate (Peter Firth) orders Clavius to find the missing body.

Clavius is skeptical and not especially pleased with this task but accompanied by his aide Lucius (Tom Felton), he begins to investigate and separate facts from rumors and fiction in his quest to find the body Yeshua.

If this approach sounds familiar it's because it is. In 2007 FoxFaith released "The Final Inquiry" about a Roman soldier who is sent by Nero to Jerusalem a few months after Jesus' crucifixion to find out the whole story of the passion, death and resurrection -- and what happened to Jesus' body. At that time, I called the movie a kind of "CSI: Jerusalem." It tells the Christian Easter story with romance and drama and it was "unexpectedly watchable."

"Risen" follows a similar plot path and is completely engaging with high quality production values. "Risen" differs from the earlier film because the detective story is the medium for Clavius' inner journey and struggle between logic and faith.

Kevin Reynolds who co-wrote and directed (and who also directed three episodes of "Hatfields and McCoys" in 2012), said that, "We wanted the film to feel big and epic, but seen from a single character's perspective."

"Risen" is well-acted with a solid cast. Fiennes is especially good and credible as he portrays a man struggling to understand and integrate his own heart with what he witnesses through the testimony of the apostles, Mary Magdalene, and Mary, the Mother of Jesus. It's a quite beautiful story of divine discovery. I think that believers and non-believers can identify with Clavius' search.

The only thing I might mention is that my impression has always been (probably because of watching too many Bible movies) is that there were more people at the Ascension that are shown in the film, but who knows, really?

Most of my readers know that I do not gush over message-laden Christian films that fail to trust the audience "to get it." While "Risen" is being marketed to churches for group sales, it transcends the Sunday school formula. As much as filmmakers have attempted to tell the Christ story, it is difficult, with some exceptions, to interpret the Gospels in an original way that engages a broad audience and allows the audience to make meaning in that space between the script and the screen. Here I think the filmmakers' imagining of what a Roman soldier might have experienced offers an stimulating and moving contribution to the canon of biblical movies that many people tend to watch during Lent as we journey toward Easter.