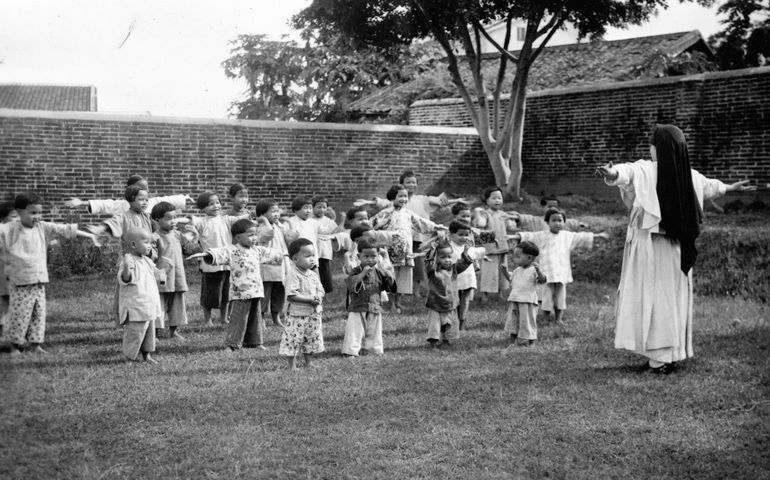 When I was growing up, I had a friend who went to Catholic school. For several years, I would spend the night at her house for New Year's Eve. We would try to stay up until midnight, but I never made it. What this public-school kid really liked about visiting her house, though, were the Catholic books and comic books she had. The most memorable of the comic books was, to me, the one about Bishop F.X. Ford of Maryknoll. My mom used to send $5 every Christmas to Maryknoll in memory of Bishop Ford, but it was the comic book that brought it together for me.

I had just entered my own community of the Daughters of St. Paul in 1967 when I encountered the photo-packed book Bernie Becomes a Nun, published in the 1950s. It was fun comparing Maryknoll's novitiate days with our own. I remember being intrigued by Sr. Bernie doing some plumbing. One of my co-novices almost entered Maryknoll because of that book and later, as a Pauline missionary to Peru, had the chance to meet Dominican Sr. Bernadette Lynch, the lovely protagonist of a book that can no longer be had.

For more than a century, Maryknoll priests, brothers and sisters have captured -- indeed, helped form -- the religious and missionary imagination of Catholics in the United States and, as a new documentary about the Maryknoll sisters attests, the world as well.

Filmmaker Nancy M. Tong graduated from a Maryknoll school in Hong Kong (the first of two schools for girls opened there in 1925 -- both continue today) but only came to realize the extent of Maryknoll's work while doing research before accepting this undertaking.

"Then I realized the scope of the sisters' work in social justice and their work with the poor in all parts of the world," Tong said in an interview. "That became the inspiration for 'Trailblazers in Habits.' "

As one of the sisters attests, these missionaries to China initially were thought to be "Nice women in strange outfits," and anything they did for the poor was judged to be subversive, especially their work to save abandoned baby girls and to assist women.

As the years go by, we learn that these sisters would be sent to prison, placed under house arrest and murdered for their good deeds, yet they would continue to serve.

The advantage to being founded in the 20th century in the United States is that people took photos and movies early on. The footage of the sisters with Mother Mary Joseph Rogers (1882-1955) in the early years at the motherhouse in Ossining, N.Y., and the description of arriving in their first mission in Hong Kong, read by narrator and Oscar-winning actress Susan Sarandon, engage the imagination still.

Early on, the Maryknoll priests and sisters realized that their spirituality was one of contemplation in action and that the way to evangelize in China was through the women rather than the men. This meant that the sisters would go outside the convent and travel two by two into distant villages to visit the homes, to assess the needs and provide assistance. The one thing the sisters asked for on their visits was a bedroom for themselves, but they still had to share the family bucket to relieve themselves during the night.

Most chilling, however, are the photos of the four missionaries murdered by the National Guard in El Salvador in 1980, including two Maryknoll sisters, Ita Ford and Maura Clark; an Ursuline sister, Dorothy Kazel; and a lay missionary, Jean Donovan. Sr. Maddie Dorsey appears in this documentary frequently, and at this point, she tells this story with great pathos because she is the one who identified the bodies.

Sister Maddie is one of eight Maryknoll sisters profiled in the film. She was also part of a team of Maryknoll sisters who opened the first integrated hospital in the U.S. in Kansas City, Kan., in 1955, 14 years before the Civil Rights Act was signed.

According to Maryknoll's archivist, Ellen Pierce, working on the documentary was a three-year process and she, for one, is very pleased with the result. While much of the film focuses on China and celebrates the important role the professional women alumnae of Maryknoll schools in Hong Kong carry out today, the sisters' work in Japanese internment camps in the U.S. during World War II is included as well.

Maryknoll Sisters are a global community today, and their membership includes women from 30 countries. Sr. Janice McLaughlin, president of the Maryknoll Sisters, also appears in the film, and her view of "Trailblazers in Habits" sums it up well:

" 'Trailblazers in Habits' is a labor of love by Nancy Tong and the alumni of our Maryknoll schools in Hong Kong. We are deeply grateful for this tribute to our congregation and hope that those who watch it will be inspired to give back to those who were instrumental in their lives, as well. As Maryknoll Sisters enter our second century of mission, we firmly believe that we can still be trailblazers as we respond to the current needs of society for peace, justice, and equality. As our founder, Mary Josephine Rogers, said in 1947: 'God has yet a great work for us to do.' "

I think the film is a testament to the past of Maryknoll and is an invitation for young people today to consider not only Maryknoll, but other forms of religious life, as well. The film points out that though the numbers of vocations in the U.S. are down, around the world, the numbers are on the increase. "Trailblazers in Habits" is a story of hope fulfilled, a faith that continues to invite, and life lived in love for God and others in community.

"Trailblazers in Habits" is available on DVD at trailblazersinhabits.com for $29 or $49 for a special edition with bonus clips and a book about the Maryknoll sisters.

'Les Misérables' a fusion of heaven and earth, sight and sound

The curse of cowardice; book illustrates influence of science and religion on cowardice-courage relationship