The wizard of the id hits the big screen 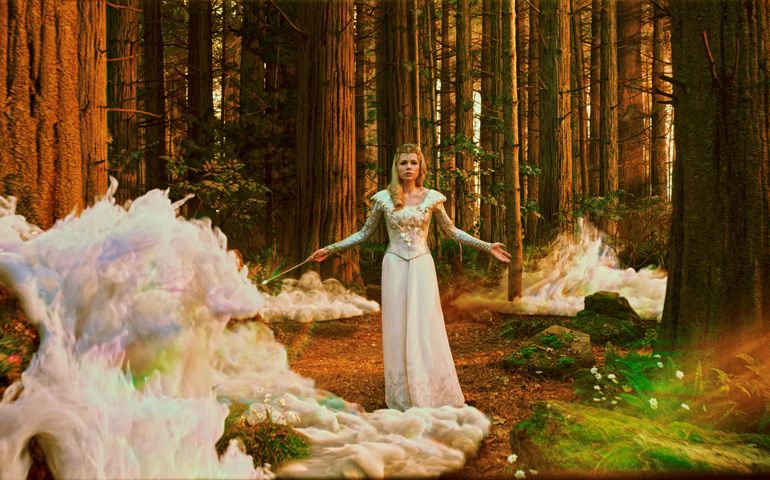 Michelle Williams stars in a scene from the movie "Oz the Great and Powerful." (CNS/Disney)

"Oz the Great and Powerful" opens with Oscar "Oz" Diggs (James Franco), a self-centered small-time carnival magician and would-be ladies' man in Kansas more than a century ago. He tries to woo young women by including them in his shows, just as he tries to con the meager profits out of his assistant, Frank (Zach Braff). As the show is about to begin, Annie (Michelle Williams), perhaps the one woman Oscar truly loves, comes to tell him another man has asked her to marry him. She tells Oscar she knows he is a good man. He replies he doesn't want to be good -- his father was a good man, a farmer who died in his fields. Oscar wants something more: greatness, like Harry Houdini.

As a tornado bears down on the carnival and with the strongman of the circus angry at him for flirting with his wife, Oscar escapes in the hot air balloon with his satchel of tricks and is sucked into the vortex. He lands in a wonderland, Oz, and is discovered by Theodora (Mila Kunis), a witch who believes Oscar will restore the kingdom of Oz left bereft after the Wicked Witch killed her father. On their way to the Emerald City, Oscar rescues a chatty monkey, Finley (voice of Braff), from a lion. After, Finley swears everlasting fealty to Oscar for saving him.

Once at the Emerald City, Oscar meets Evanora (Rachel Weisz), Theodora's sister, who doubts Oscar is the new wizard and sends him on a quest to kill the Wicked Witch before he can take possession of the piles of gold and the power as the wizard of Oz. On the way, he meets and glues back together China Girl (Joey King), whose town and family were destroyed by the Wicked Witch and Glinda the Good Witch (Williams).

This band and a ragtag coalition of farmers, tinkers and Munchkins must overcome the Winkies (members of the Wicked Witch's army) and the flying baboons so Oscar can become the wizard and re-establish peace in the land.

Disney's "Oz the Great and Powerful" is based on the original novel, L. Frank Baum's "The Wonderful Wizard of Oz," and there are numerous allusions and illusions to conjure up memories of both the novel and the 1939 film "The Wizard of Oz," which is supposed to be its sequel. If you are a fan of the musical "Wicked," know that this new film is complementary to all the Oz-isms in the universe, and I, for one, enjoyed it.

It will take the mindful viewer only a few moments to realize Oscar is a good-looking scoundrel and loser. He knows this but believes money and power can take the place of hard work and being a man of character. This is the illusive, unrealistic dream that drives him. Later, Glinda, with much kindness, analyzes his character as weak and egotistical, but manages to bring out the best in him when it counts.

"Oz the Great and Powerful" is filled with themes to talk about with children. For example, an astute catechist could develop an entire lesson about prayer, even though God's name is not mentioned. Oscar starts off by bargaining with God to save him, then petitioning for help. What is prayer? Why and when do we pray? and so forth.

The topic of what it means to be a person of character, to choose others before self, to do the right thing when no one is looking is the central premise of the film. Character is a topic for all seasons and ages, especially by contrasting Oz's ambition to be wealthy and powerful no matter who he offends along the way with those of Jesus' teaching in the Sermon on the Mount.

Family is another plot thread that weaves through the narrative, from the broken family through outside forces to those flaws and choices that can damage a family from the inside. Families can heal and be healed when goodness and hope, shown through the actions of caring people, prevail in a society.

Community and nonviolence as a theme grows naturally from the narrative and with the absence of direct violence, though the threat of it lurks. There is peril and darkness, but the "pro-social" group devises creative ways to meet the challenges they face through nonviolence.

Then there is the image of women. Each of the several speaking female characters in the story expresses a dimension of personhood lacking in some way, but the inner strength of women emerges at the end. Certainly, Oscar is greatly flawed but affable, like a wayward schoolboy that tells lies, cheats and cannot, will not, make a commitment. Glinda the beautiful, blonde and good, in a maternal mode, rebukes Oscar in a comforting tone and holds out to him ideals he can achieve. It would be interesting to talk about her character as the epitome of womanhood, along with China Girl. Theodora, who in tight leather pants and stylish red hat soon turns positively green with envy, is needy, gullible, vengeful and unforgiving; Evanora is false, ambitious, conniving and mean. China Doll is broken and needs a man to save her, but she shows great courage at the end and shows what women working together can accomplish for the community.

The one thing I missed in "Oz the Great and Powerful" was music and memorable songs, and there was no sign of any ruby slippers, probably because Warner Bros. holds the rights to images, or perhaps these will come with the sequel. The flying monkeys are not nearly as terrifying as those in the 1939 film. The poppy effect will probably go over the heads of younger viewers (at least I hope it does), but the permanence of drug effects might be worth mentioning to kids of a certain age or ages.

"Oz the Great and Powerful" is not and cannot be our mother's or grandmother's favorite movie, but in the plethora of big-budget movies aimed at the family, it's good enough.

Culture | The wizard of the id hits the big screen

April Fools' Day isn't a religious holiday, but there are some religious roots

Holy Week music sets a high bar, but one church rises to the challenge