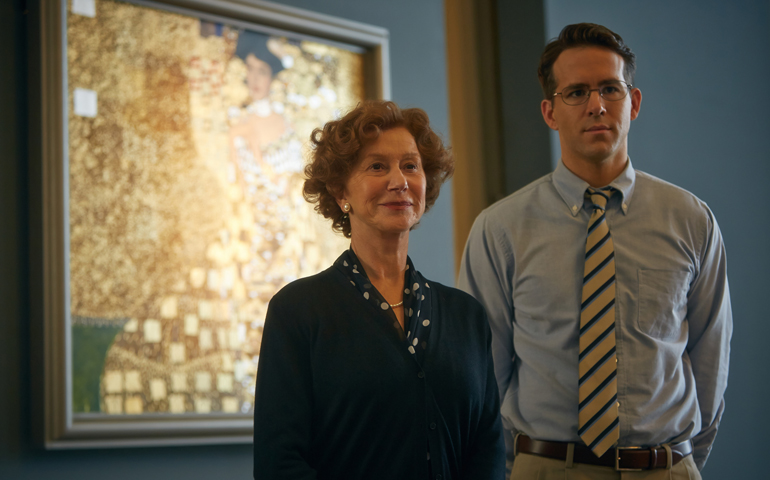 "Woman in Gold" is a David-and-Goliath story. When the sister of Maria Altmann (Helen Mirren) dies in Los Angeles, she chats with an old family friend from Vienna about some information she found in her sister's belongings. Maria's friend says her son, Randol Schoenberg (Ryan Reynolds), a young lawyer with time on his hands, might be able to help her.

Randol shows up at Maria's home near Beverly Hills. Although he is reluctant, he listens to her story about a famous painting of her aunt, Adele Bloch-Bauer, by Gustav Klimt that was stolen by the Nazis and is now hanging in the Belvedere, a museum in Vienna. The Bloch-Bauers were a wealthy Jewish family -- Adele's husband was a sugar baron. Now Maria wants the painting back, but it seems that Adele, who died in 1925, left it (and four others by Klimt) to the museum in her will. Can it be contested? It is on this fact that the entire story turns.

When Randol learns of a conference in Vienna about restitution of art stolen by the Nazis from Jewish families and held by the Austrian government, he arranges for Maria to tell her story there. After the horrors of her own escape from Austria in 1938 and what happened to her family, Maria is adamant about not returning to Vienna. In the end, she does go.

Three key things happen on this trip: Maria and Randol are able to recover her aunt's original will; the Ministry of Culture committee assigned to return property to the families refuses to meet with them; and in order to file a lawsuit in Austria, they will have to pay about $1.7 million (a percentage of the estimated value of the artwork) just to start the process. (No one had that kind of cash.) They also become friends with a journalist who will make a most important discovery.

When they return to Los Angeles, Maria seems ready to let things go, but Randol wants to continue. They argue, as they will many times over the years. The first hurdle is to overcome laws that seem to prevent a U.S. citizen from suing the Austrian government in a U.S. court. Thus begins a legal process that lasts years.

The "Woman in Gold" painting of Adele Bloch-Bauer is a portrait in the Symbolist school or aesthetic, meaning that the artist, Klimt in this case, uses mythological or dream imagery in his work. This portrait is part of his "golden phase" revealed by his lavish use of gold leaf and took him three years to complete. The film's cinematography reflects the portrait throughout -- for example, making the cobblestone streets of Vienna shimmer. It's a very elegant film.

Mirren plays the aging Maria with pluck and humor. Reynolds is very good as the inexperienced young lawyer who is willing to go toe-to-toe with judges to obtain justice for his client from the government of another country. (That scene is most entertaining.) I found the film fascinating, especially the scenes of Maria's original home in Vienna.

In comments made after the screening that I attended at the Museum of Tolerance here in Los Angeles, the real Randol Schoenberg, a descendent of the composer-artist Arnold Schoenberg, added context to the story.

Maria Altmann died in 2011 at the age of 94. The most dramatic part of the film shows Maria as a young woman (Tatiana Maslany) escaping Vienna with her husband, Fritz (Max Irons), after the Anschluss, when Hitler annexed Austria in March 1938. Schoenberg said when the couple got to Cologne on their way to Holland, Fritz was arrested, sent to Dachau and held for ransom. When Fritz was free to go, a priest helped them cross into Holland, where they soon left for the U.S. That priest, whom Schoenberg did not identify, was later arrested and killed.

Schoenberg also explained that the Monuments Men, who recovered so much art stolen by the Nazis, did not return the art to individuals, but to the countries the owners came from. Even today, some European countries refuse to restore plundered art to the rightful heirs, and if they do return it, the process is long, costly and arduous.

As for Maria Altmann's family, Schoenberg said, the Nazis actually stole the five Klimts and about 200 other pieces from the Bloch-Bauer home, where Maria lived with her sister and brother (he is not in the film), her parents, and her uncle and his wife, Aunt Adele, who did not have children of their own. In the 1950s, the Austrian government, in its own ransom-like behavior, agreed to let the family have everything back if they would leave the five Klimts in Austria. At the time, the family agreed.

"Woman in Gold" is a first-rate detective story that unravels and solves a decades-old mystery that began in one of the most terrible episodes in recorded history, the Holocaust. It is also a witness against countries that refuse to return stolen art to the rightful heirs, compounding the original injustice. It is especially fitting that the film is released this year, which marks the 70th anniversary of the liberation of German concentration camps by the Allies.