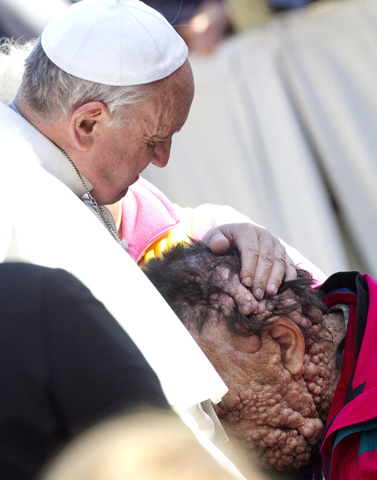 As we begin to listen carefully and deeply to the lessons today, I think it might be important first of all to say a word about the first lesson -- what seems to be such a harsh law imposed upon the people when they were afflicted with an illness. But in that time, of course, many people, if you remember a couple of weeks ago we read from the Book of Job, thought any affliction like that was because people had sinned, and so it was a punishment and they had to give up their sins in order to be cured.

But in fact, the ritual cleansing that needed to take place or to be approved by the priests was in order to prevent contagion from happening because also in those times, with these kinds of diseases that were very contagious and actually very painful and brought a lot of suffering, were also easy to spread. And so that's why that harsh rule was imposed upon them.

You have to leave the community. You even have to go through like a ritual purification: Cut your hair, put on sackcloth and ashes, and then if anybody comes near, cry out, "Unclean! Unclean!" They were cut off totally from the community, which is very harsh and difficult, but with their understanding and not understanding how to prevent contagion, that was the only way they can deal with it, so it isn't quite as harsh as it seems. It was the practical way of trying to prevent contagion from spreading through the whole community.

But now in the Gospel lesson, we meet Jesus again, showing his own understanding of course, that no, this isn't the result of sin. But also, Jesus' great sense of compassion, how when he saw someone afflicted or suffering, that person was very special to him. He reached out individually. And again, if you remember last Sunday's Gospel, all the people of the village came to the house of Simon Peter, where Jesus had cured Simon's mother-in-law.

They came flocking, and you would think Jesus could simply say, "Be cured; you're all healed," but no, he spent the whole night. Why? Because he wanted to talk to each person. Every person, unique special person, is special to Jesus. That's what compassion means -- you reach out to another person, enter into their suffering, if it's suffering. We even enter into their joy if they're excited about something. You share the feeling, the emotion of another person deeply. That's compassion.

And so Jesus is engaged in that work -- driving out demons, healing the sick, trying to teach people that everything belongs to God, who's given it to us as gifts and therefore we must share so that every person has a full human life, transform our world. We're called to be disciples of Jesus, so we enter into this work of Jesus.

And today, as we hear this Gospel, there are two things, I think, that we perhaps can do if we really want to respond to Jesus. First of all, we can imitate that confidence of the afflicted person: "Jesus, if you wish, you could make me clean." He totally trusted Jesus. He was ready to accept whatever Jesus had in mind for him. He wanted to receive the benefit of the love of Jesus, and so he had this confidence.

And we, too, when something happens in our life that is difficult or painful or disturbing, what we need is to have that kind of confidence in God that comes to us because of our love, our confidence in Jesus. And so we pray as that man did, with confidence, with hope. And we don't expect always that Jesus is going to work a miracle, but we do expect that we will experience the love of Jesus as he cares for us in that compassionate way that he shows in the Gospel.

But then the other thing, and perhaps even more challenging, is that we, too, begin always to act with total compassion and compassion for other people. And I've been reading of the life of Pope Francis that shows the kind of person Pope Francis is. And all of us, I'm sure, because we have followed what has happened now and then in the news, have been aware of how extraordinary Pope Francis is in reaching out to people.

And just a month or two, or maybe three or four months after he began to be the bishop of Rome, he made a trip to Assisi. He had taken the name Francis, [like] St. Francis of Assisi, and Francis of Assisi was one who, in his own life, struggled because he had an abhorrence of people with afflictions, especially people who were lepers, true lepers, like those who suffer in our time from what we call Hansen's disease.

And Francis, at one point in his life (this is described in this book), had been afraid, disgusted by the sores of lepers. But then later on, after his conversion, he cleaned their bodies, dressed their wounds. Those whom he had recoiled from now gave him the light and joy. It was a rebirth, a healing, a way of seeing the world now with God's eyes.

And so Pope Francis, in imitation of St. Francis when he went to Assisi, went first of all to the institute where lepers were gathered. For an hour, he was theirs. They clasped his hand, took him aside to confide their thoughts and feelings, played with his pectoral cross, shouted ... screamed, and Francis said quietly, as he was visibly moved, "We are among the wounds of Jesus." So he reached out as Francis of Assisi did, showing us compassion.

But then, and this is even more surprising, the following month, Francis stunned the world by caressing the sores of Vinicio Riva, a 53-year-old man whose facial disfigurement was so grotesque, it caused people to get off buses to avoid looking at him. You may have read about this. When Francis kissed his painful growths, a symptom of a genetic disease called neurofibromatosis, the man's heart beat so fast that he thought he would die.

He later said: "The pope didn't even think about whether or not to hug me. I'm not contagious, but he didn't know that. He just did it. He caressed me all over my face and as he did it, I felt only love." Well, there's a marvelous example that Pope Francis gives to us of being compassionate, and it's something that every one of us can do if we have that same spirit of love.

In this case, it was, I'm sure it was difficult. This man, maybe you saw the picture, really was grotesque. People turned away, couldn't look at it. But he's a human being, so it was important to reach out and not push him away, exclude him from society. And when Francis embraced him, kissed his growths on his face, the man was just overcome, overwhelmed. He had been treated as a human person and loved.

And isn't that something every one of us could do in circumstances where there are those in need of healing -- physical healing, spiritual healing, or emotional healing? People who are deeply hurting? They need our love, our compassion, and that's what will help to bring about the reign of God. See, Francis shows us what every one of us can do.

If we want to follow Jesus, well then we must embrace this sense of trying to be compassionate, reaching out in understanding and love to every person. Maybe starting within our own family, if there's a brokenness there. Or in our neighborhood, or in our community relations, ultimately in the world. If we really reached out in compassion and love, we can end violence and hatred and all the evils that go on because of that in our world.

It can all start with our efforts to be compassionate to those in our everyday lives. As we begin to reach out that way, we will begin to transform our world into the reign of God. And that can spread, and the reign of God will happen as Jesus promised.

[Homily given at St. Philomena Catholic Church in Detroit. The transcripts of Bishop Gumbleton's homilies are posted weekly to NCRonline.org. Sign up here to receive an email alert when the latest homily is posted.]