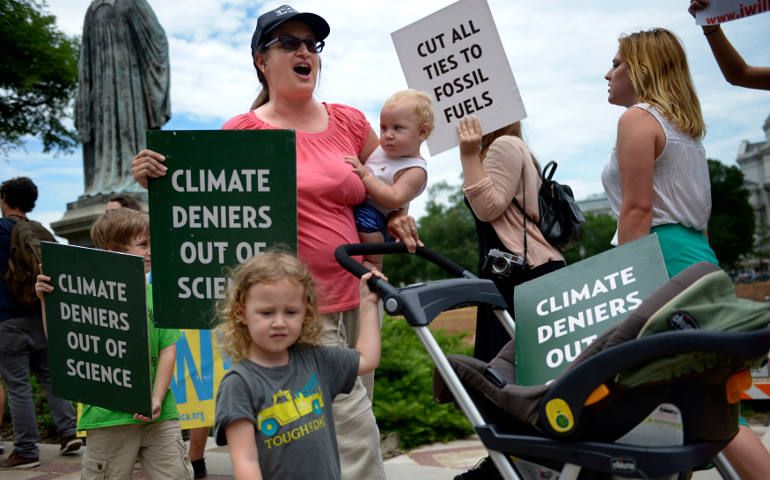 A petition made public Thursday seeks thousands of Catholics to urge Donald Trump “to take swift and meaningful action” as president on climate change, primarily through honoring commitments and pledges enacted under his predecessor.

Drafted by the Catholic Climate Covenant, the petition asks Trump “to demonstrate bold leadership” on climate by following through on three fronts that emerged under President Barack Obama:

“Because climate change is already harming millions of people across the U.S. and around the globe, Pope Francis has called national leaders to work together to address this crisis. Similarly, the United States Conference of Catholic Bishops (USCCB) strongly supports a national carbon pollution standard as essential to effective implementation of the Paris Agreement,” the petition reads.

In his encyclical, “Laudato Si’, on Care for Our Common Home,” Francis said, “There is an urgent need to de­velop policies so that, in the next few years, the emission of carbon dioxide and other highly pol­luting gases can be drastically reduced, for exam­ple, substituting for fossil fuels and developing sources of renewable energy.”

The petition concludes: “As the leader of the most powerful country in the world, you have a critical role to play in solving this crisis. We urge you to take swift and meaningful action before it is too late.”

The Catholic Climate Covenant hopes to garner thousands of signatures to the appeal, asking that Catholics spread it on social media, include it in parish bulletins and share it at church functions. It plans to deliver the signatures to Trump sometime after Inauguration Day (Jan. 20).

The petition cites a Public Religion Research Institute poll taken before the September 2015 U.S. papal visit that found 73 percent of Catholics believing the government should do more to address climate change, a viewpoint solidified even more among non-white Catholics (86 percent).

A May 2016 survey conducted by the Center for Applied Research in the Apostolate at Georgetown University also showed 73 percent of American Catholic adults believing society should take steps to combat climate change. Two-thirds rated climate change as either the most important or a very important problem for the world today, and said they have a moral responsibility to do what they can to address global warming.

That poll also found 60 percent of Catholic adults, on par with the general public, agreeing with the scientific consensus on climate change — that the earth is warming largely due to human activity.

Throughout his campaign, Trump said he would remove the U.S. from the Paris Agreement, end U.S. payments to United Nations climate programs, and eliminate the EPA, and with it, the Clean Power Plan. He also stated numerous times he believed climate change is a “hoax.”

Similar scrutiny has met Trump’s selection for Secretary of State, Exxon Mobil CEO Rex Tillerson. In recent years, the oil and gas giant has acknowledged the serious risks posed by climate change and in November welcomed the Paris Agreement as it entered into force as “an important step” and expressed a desire to be part of solutions. But the company that profits from fossil fuel extraction remains under investigation, including by the Securities and Exchange Commission and several state attorneys general, as to what it knew about climate impacts decades ago and whether it withheld that information from stockholders and the public.

With regard to the Clean Power Plan — in limbo in federal appeals court due to a lawsuit brought by Pruitt and 26 other state attorneys general — the Catholic petition emphasizes the job creation and economic opportunity the carbon rules encourage through a transition to clean energy and energy efficiency. A recent report showed the solar industry had its largest ever fiscal quarter in 2016’s third quarter, with a 191 percent increase in solar installation compared to the same time a year earlier. The nation’s first offshore wind farm began spinning Monday off the coast of Rhode Island.

The petition also stresses the reality of climate change and its effects today on real people, rather than merely a distant projection.

It noted climate change is an underlying cause of recent migrations; On Friday, Bloomberg News reported that Obama has called for a federal action plan for voluntary relocations of towns threatened by rising seas and more extreme weather.

Drought is among the factors believed to have led to Syria’s devastating civil war. Elsewhere, flooding lowlands in Bangladesh has led to relocations of people, as has rising seas in Alaska, where native communities face the grueling decision to leave long-settled homes or fortify their shoreline — both expensive options. Already, Louisiana marshland is disappearing under higher sea levels and more intense “king tides” flood more and more of southern Florida. In California, the state has entered its sixth year of drought, which has been exacerbated by a warming climate.

Numerous organizations have endorsed the Catholic climate petition to Trump, including the Global Catholic Climate Movement, the Leadership Conference of Women Religious, the Conference of Major Superiors of Men, the Sisters of Mercy and Franciscan Action Network.

Other religious efforts are under way aiming to sway Trump toward a more climate-conscious stance once in the White House. In January, multi-faith groups are hoping to hold 100 prayer vigils throughout the country during the incoming president’s first 100 hours in office, in a stand they say both against his climate-skeptic appointments and for an environmentally sustainable future.