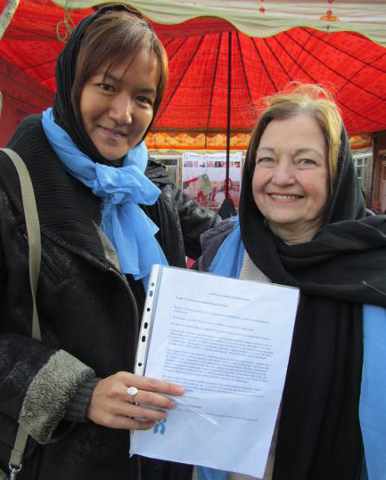 We call upon the United Nations to negotiate an immediate cease-fire to the war in Afghanistan, and to start talks aimed at ending the war and beginning the long road to healing and recovery. That’s what the Afghan youth said on Tuesday afternoon in Kabul, along with Nobel Peace Prize winner Mairead Maguire of Ireland, as they launched their “Two Million Friends for Afghanistan” campaign and presented their petition to a senior United Nations official.

For me, it was the climax of a heart-breaking, astonishing eight days in one of the poorest, most violent, most war-torn, most corrupt, and most polluted places on the planet — and because of the amazing “Afghan Peace Volunteers,” the 25 Afghan youth who live and work together in a community of peace and nonviolence — one of the most hopeful.

All these Afghan youth have suffered from war and poverty, but as they point out, two million people have been killed in war in Afghanistan over the past four decades. After ten years of Soviet war and occupation in the 1980s, then the Civil War in the early 1990s led by the corrupt warlords, then the years of oppression under the Taliban, and now 11 years of American war and occupation, they are sick of war. Their message is the same message we heard everywhere — from a woman’s cooperative, a children’s school, a refugee camp, and even in Parliament — “Stop the Killings. End the war. We want peace.”

Here is what they said on Tuesday afternoon in Kabul:

“Each day the violence continues means a continuing humanitarian disaster for the people of Afghanistan. It is time for the parties in conflict to seek non-military alternatives and to work cooperatively to allocate the funds and resources necessary for a full reconstruction campaign in Afghanistan. The people of Afghanistan, especially Afghan mothers, cry out for the wars to cease and for their children to be fed and educated. We ask for their cries to be heard.

“We believe that a negotiated ceasefire initiated by the United Nations will greatly assist Afghans in their wish to end the war. A ceasefire will pave the way for negotiations, reconciliation and the important responsibility to meet the humanitarian and socio-economic needs of 30 million Afghans.”

Mairead Maguire spoke from her experience of 30 years of warfare and division in Northern Ireland to call for an end to the killings and U.S. drone attacks and the start of dialogue and reconstruction, for a nonviolent solution to the horrific wars and divisions that have destroyed the country, and urgent work to relieve the terrible suffering among tens of millions of impoverished, starving, hopeless Afghans, especially the women and children.

This call for a ceasefire and peace talks was the best response to the pain and suffering we heard from the hundreds of people we met throughout our visit.

“Who will hear the voice of the suffering people?” one woman from a sewing cooperative asked us through her tears. “We have so much pain in our hearts because no one will hear us, no one will end this war.”

“Afghanistan is a big hospital,” another woman told us. “We see death every day and we’re becoming numb to it. The U.S. is running a slaughterhouse, an abbatoir where sheep are being slaughtered. When will this war end?”

“Finish this war,” the leader of one of the refugee camps said to us as we sat on the ground under a United Nations’ tent. “We don’t want anyone else killed. No one in this camp wants this war to continue. After three decades of war, nothing has been gained. Nothing is being built. Everything is being destroyed. We are sick of war.”

“This war has been a disaster for us, but also for the American people,” parliamentarian and presidential candidate Dr. Ramazan Bashardost told us. “It’s a tragedy. Your own country is losing money and the lives of soldiers through it. You’re only providing security for our warlords, the war criminals of Afghanistan. You are not with the Afghan people. You are with the enemy of the Afghan people. It’s time to stop the killing, to stop supporting the killers.” We need schools, homes, food and basic resources to clean up and rebuild our country, he said.

“We are all the same, all human beings, all living under the same blue sky,” 15 year old Ghulami of the Afghan Peace Volunteers says. “We should all be friends and learn to live in peace together.”

“We want to be friends with the people of the world, with the youth of America,” 16 year old Abdulhai, who lost his father in the war, told me. “Tell everyone, if you don’t know about us, or think we are terrorists, come meet us. Learn about us. We don’t want war. We want to be at peace with everyone.”

I urge people to join with the Afghan Peace Volunteers by signing their petition at www.2millionfriends.org; watching their videos at www.journeytosmile.org; and pushing for an end to the U.S. war in Afghanistan.

The people of Afghanistan don’t want to wait any longer, they told us. They want peace now.

John Dear is in Afghanistan on a peacemaking mission for several weeks. He will lead a retreat, "Jesus the Peacemaker," April 5-7 in Pennsylvania. To see John's speaking schedule or to invite him to speak in your church or school, go to John Dear's website. One of John's essays appears in the new book A Faith Not Worth Fighting For. His book Lazarus, Come Forth! explores Jesus as the God of life calling humanity (in the symbol of the dead Lazarus) out of the tombs of the culture of war and death. John's talk at the 2011 Sabeel conference in Bethlehem is featured in the new book Challenging Empire. John is profiled with Dan Berrigan and Roy Bourgeois in a new book, Divine Rebels by Deena Guzder (Lawrence Hill Books). This book and other recent books, including Daniel Berrigan: Essential Writings; Put Down Your Sword and A Persistent Peace, are available from Amazon.com.