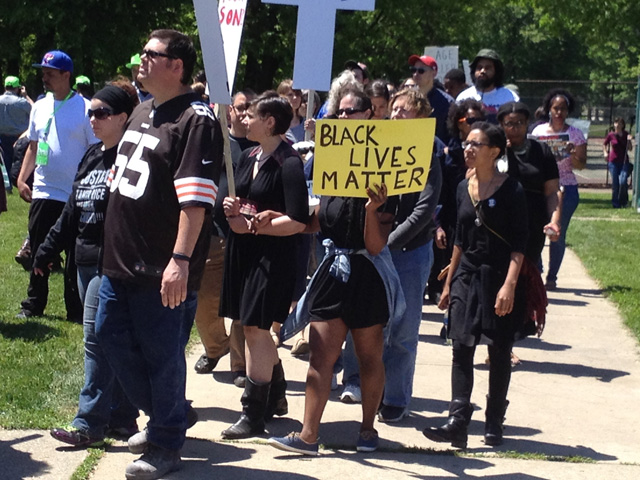 Demonstrators walk through the neighborhood near Christine Schenk's motherhouse on May 23, the day the Brelo decision was announced. The peaceful demonstration was conducted in memory of Tamir Rice. (Christine Schenk)

It is a confusing, bittersweet time for my city. On May 26, Cleveland mayor Frank Jackson and the U.S. Justice Department announced a sweeping agreement to reform the Cleveland Police Department. That evening, our beloved Cleveland Cavaliers won the Eastern Division basketball championship.

The next morning's Cleveland Plain Dealer carried the oddest front page I have seen in 37 years of living here. Predictably, in this crazy-for-sports-town, the Cavs had the biggest headline: ON TO THE FINALS! Directly beneath, in smaller type, I read: DEAL SEEKS SWEEPING REFORMS. Although the Cavs had a bigger headline, the long-awaited settlement (also known as a consent decree) received the most ink by far, with pages of in-depth coverage.

It all seemed pretty surreal coming just three days after police officer Michael Brelo was acquitted of two counts of voluntary manslaughter for his role in a 2012 over-the-top police chase involving more than 100 officers and 60 squad cars. Brelo was one of 13 police who fired a total of 137 bullets at a Chevy Malibu, killing unarmed occupants Timothy Russell and Malissa Williams who, for reasons unknown, fled police. Prosecutors said Brelo stepped onto the hood of the Malibu and fired 15 rounds straight through the windshield, even after other the officers stopped shooting. No other officers were charged, but five police supervisors were indicted for dereliction of duty. Their trial date has not yet been set.

After what is known around town as the "137 shots" incident, Mayor Jackson called for an immediate federal investigation. He had tried for years to hold the Cleveland police accountable for excessive use of force only to be reversed by arbitrators or obstructed by union contracts. While the consent decree doesn't address either of these issues, it will require documentation each time an officer draws his weapon.

In its report in December, the Justice Department found Cleveland officers weren't being disciplined in part because of a flawed framework for investigating complaints. The process for filing a complaint is difficult, and when someone did file one, it was often ignored. This is due to a "culture of blue" in which police frequently turn a blind eye to improper conduct by their fellow officers.

While the Justice Department acknowledged that the majority of the force used by Cleveland police was "reasonable and not in violation of the Constitution," it nevertheless concluded that the Cleveland Police Department "engages in a pattern or practice of the use of excessive force in violation of the Fourth Amendment of the United States Constitution." The report also "determined that structural and systemic deficiencies and practices -- including insufficient accountability, inadequate training, ineffective policies, and inadequate engagement with the community -- contribute to the use of unreasonable force."

Their findings were tragically borne out on Nov. 22, when 12-year-old Tamir Rice was shot and killed by police officer Timothy Loehmann seconds after Loehmann arrived at a recreation center where the child was playing with a pellet gun.

I couldn't help but wonder if Tamir, who was tall for his age, would have followed in LeBron James' footsteps had he lived. How many potential Mayor Jacksons and Matthew Dellavedovas (Cavaliers' point guard) will we lose to violent death at the hands of police or, even more frequently, at the hands of neighborhood thugs?

As sickening as the Tamir Rice episode was, the new May 27 agreement gives reason to hope that substantive systemic change is possible. The agreement makes extensive provision for citizen oversight, including an independent civilian inspector general and a 13-member community police commission. It also identifies explicit standards for unholstering weapons, police stops, searches and seizures. City leaders and civil rights advocates are optimistic about the reforms, though the police union is opposed to some aspects. While the union said it would cooperate, there is resistance in the ranks, especially over documentation requirements.

Police are permitted to use deadly force only when they fear for their own lives or the lives of others. Without documentation, it is often impossible to determine what actually happened, who needs more training, and the true extent of the problem. The incidence of police brutality has probably not gone up, experts say. Instead, the use of cellphone videos has made it more difficult for egregious police behavior to escape detection. Still, reliable data is hard to come by.

A recent Washington Post nationwide study found that 385 people were shot and killed by police during the first five months of 2015. That is twice the rate of fatal police shootings reported by the federal government over the past decade. Former police chief Jim Bueermann concluded: "These shootings are grossly underreported. ... We are never going to reduce the number of police shootings if we don't begin to accurately track this information."

Of the 385 people killed, 62 were unarmed, and 92 were mentally ill. In only three cases were officers charged with a crime.

On the morning of May 23, my city held its collective breath while we awaited Judge John P. O'Donnell's decision in the Brelo case. Since the legal bar is high for conviction in brutality cases, many feared that Cleveland, like Baltimore, would erupt in violence if Brelo were acquitted. But thanks to excellent advance preparation by the mayor, civic groups and a coalition of religious leaders from the Greater Cleveland Congregations and the Cleveland Clergy Alliance, that didn't happen.

Sadly missing from the public solidarity of Protestant, Jewish and Muslim leaders was official representation from the Catholic diocese of Cleveland.

Oh, there were many ordinary Catholics involved in praying and organizing, including my own religious congregation. (Our motherhouse is in the city, and we gave permission for peaceful demonstrators to use our grounds if needed.) I know of at least one diocesan staffer who attended neighborhood meetings, but no public statements or prayers were issued by the Cleveland diocese or by its bishop, Richard Lennon.

In 2011, Lennon inexplicably refused to allow Catholic inner-city parishes to join the Greater Cleveland Congregations, even though the diocese's own Campaign for Human Development advisory board had given the group its highest possible rating. Lennon's behavior is in stark contrast to that of his predecessor, Bishop Anthony Pilla, who worked diligently with interfaith groups and encouraged Catholic involvement in poverty and justice issues throughout the city.

The implementation of the new consent agreement will be overseen by trusted Chief U.S. District Judge Solomon Oliver Jr., and it will cost money -- money my poverty-challenged city doesn't have. Mayor Jackson immediately asked for and received promises of help from the private sector, including the business community, United Way, AFL-CIO and others.

William Myers, pastor of New Mount Zion Baptist Church, told the Plain Dealer that Cleveland's policing behavior won't change overnight: "We are dealing with the culture of blue that has become institutionalized ... Churches and civic groups have to keep the pressure on."

A beloved pastor once taught that we should begin each day with the Gospels in one hand and the newspaper (now an iPad?) in the other.

I wonder if Bishop Lennon ever heard that message. Hopefully, he will soon speak publicly about what is surely the most pressing moral issue facing our city.

Right now, his silence is deafening.