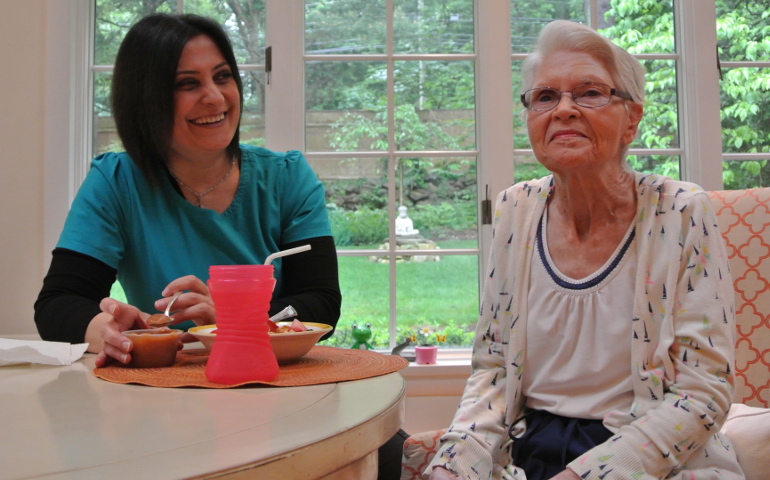 When Vickie fell and broke her hip three years ago, I called Visiting Angels, a provider of home care services for the elderly. The owner, Jim Keane, knew that Vickie had Alzheimer’s and that I had been taking care of her by myself for 10 years. He asked what I wanted most in a caregiver to help me when Vickie came home. “Two things,” I said. “A pro who knows what she’s doing and someone who loves what she’s doing.”

Jim had just one word: “Maka.”

Maka is still here, two nights and mornings a week, watching over Vickie like an angel while she sleeps, and I snore in another room. Maka will be going away soon and we will miss her more than the von Trapp kids missed Julie Andrews when she went away. But we are happy for Maka.

She and her family will move from Connecticut to Pennsylvania where they’ll be able to afford a house and be near the seat of their church, the Georgian Orthodox Church, in the United States. Maka is an immigrant from the Republic of Georgia, and her story is as American as pascha, the Georgian equivalent of hot cross buns on Easter morning.

Maka and her identical twin Eka (Ekaterine) were born 40 years ago on Christmas Day, Jan. 7, 1977 (Jan. 7 is Christmas for 260 million Orthodox Christians) in Batumi, a resort city that hugs the Black Sea near the foot of the Caucasus mountains. But it wasn’t a Technicolor city in those days. The Soviets had invaded and like paper over rock, communism smothered the faith of the peace-loving country. Food was rationed, and there was no electricity and no running water in the concrete high rise where the girls lived with their mother and their father who worked three jobs to make ends meet.

“Every morning,” remembered Maka, “Eka and I had to get up early and walk down nine stories with buckets to fill with water from one spout that worked outside building. We took the buckets upstairs to take showers before school. We knew how to take a shower with a plastic cup. You have to put soap on and then we all use water this way because you don’t want to carry many buckets up nine floors. But even then we had fun.”

Maka married Alex when they were in university and both working. Maka gave birth to Anna and a son, Luka. “Times were better,” she said. “Russia was gone. America was helping. Alex started a company to repair computers, and I helped manage it. But in Georgia economy, even with good job your paycheck covers nanny so you can work, not much else. I wanted our children to have comfortable life.”

Maka went to the U.S. Embassy twice to apply for visas. They said no. “I was devastated.” Then in 2011 they won the lottery for a green card. “I didn’t have to think twice. My heart was already here. My brain too. I think I was born here.”

The Anguladze family arrived at Kennedy Airport on Feb. 17, 2011, just six years ago, with four suitcases. “I was scared that maybe I look like terrorist. You know, I look Iranian or Arabian. There was black officer at customs desk and he sees my fear and said to me, ‘Don’t worry. Just remember to say thank you and you’re welcome and you’ll survive.’ “

Alex, an entrepreneur with two degrees, one in information technology, started a company, but brains and hard work with no capital in the worst recession in American history was starting with three strikes, and eventually he was driving a truck and later an Uber. Maka’s degree in economic relations meant nothing and to make ends meet she started caregiving.

“My first job was for an elderly lady and I had to pretend I know English and read body language. At night, I watched TV to learn English, ‘Friends,’ ‘Frasier,’ ‘The Golden Girls,’ because everybody laughed at what Sophia is saying and I want to know what it is. Best for learning English is ‘The Kardashians’ because their English was so poor and easy to understand. Wasn’t a difficult English word there, was like Georgian or Russian or Rumanian English, perfect.”

Anna and Luka spoke no English and were mainlined into school. “One day,” Luka recalled, “I woke up and it was all there. I could speak the language. I wish my mother had not lost so much time coming here as an adult. She is so intelligent. If you are born in this country and have good parents and a good education from the start, you can become anything you want. Everything is possible.” Luka is a sophomore in high school and wants to be a neurosurgeon when he grows up. “I’ll fly to Georgia and do operations for free.”

“Sometimes,” said Maka, “I feel like I want to cry, crying is good for you, but when I think of why I am sad I see all the good things that happen to us here, and I say, ‘What is this? Only 20 percent is bad. Crying is good for you but I am happy!’ “

Maka works seven days a week, up to 16 hours a day, at four jobs. She is a certified nurse’s assistant. She works the night shift at Stamford Hospital four nights a week, and as a caregiver in assisted living facilities and private homes. “I love old people,” she said. “I pray that when I am old someone will care for me.”

Prayer and church are as much a part of the Anguladze family DNA as their tight bond with each other. They pray with icons in their two-bedroom apartment that is home not only for them but for priests from the diocesan center in Pennsylvania who come on weekends to do liturgy for the small diaspora in Stamford. They also make room for new immigrants and help them get started. Maka helps support family members back home, and raises money through gofundme.com for Georgians who need to go to Istanbul for lifesaving surgeries. She and Alex save a little and pay taxes.

“You don’t have to be poor in this country,” Maka said. “If you say ‘I won’t do this or that job,’ all you are doing is waiting for green light which may never come. Take what is in front of you and take care of your family.” Once Maka was talking to a conductor on the New Haven line and learned he had been a lawyer and lost his job. This was the only job he could find when he needed one. He became her hero.

“I love this country,” Maka said. “I love its freedoms, freedom of religion most of all because when I was child priests were punished by Russian communists and you had to do liturgia in secret. I love freedom of speech, I love that people help each other, I love that this morning I saw old lady in assisted living was so happy, she was Skyping soldiers in the Army and she was entertaining them, talking to them, telling jokes. This is such a great country that even 100-year-old woman so happy she is having fun, not just waiting here for her death.”

Maka and her family will soon be in Pennsylvania, far from us, alas, but closer to the American dream of citizenship and a home of their own. She will still wash her hair with water from a plastic cup, as she does today. “Alex asks me how come I still do it this way every night. I tell him, ‘I enjoy it because I miss my childhood.’ “ Georgia is still on her mind.

[Michael Leach writes and edits from his home in Riverside, Connecticut. His newest book is The Way of Gratitude: Readings for a Joyful Life.]