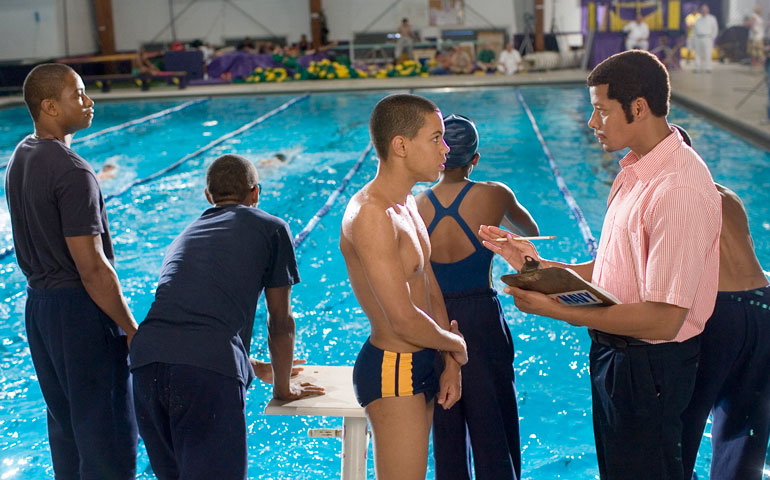 Evan Ross and Terrence Howard star in a scene from the movie "Pride." (CNS/Lionsgate)

Forty million Americans will watch the Academy Awards on March 2. How many of the nine nominated films have you seen? I've seen "Gravity," "Nebraska" and "Captain Phillips." I want to see the others but will wait for some to stream at home. Unless you're Sr. Rose Pacatte, you're in the same boat. Here, then, are some really good older movies you can see at home right now. They have three things in common: They're at once entertaining and soulful; they're available on Netflix, Amazon, iTunes, VUDU or something else; and chances are you've not seen any of them yet.

Hachi: A Dog's Tale (2009). This wonderful movie about a dog that waits at the railroad station every evening to greet his master for nine years after his death went straight to video for some strange reason. It stars Richard Gere and an Academy Award-worthy Akita. It's a true story about fidelity and how if we were only half as loving as our dogs, the world would be a better place.

Children of Heaven (1997). Movies from Iran have beautiful spiritual values, none more touching than this story about a brother and sister and a lost pair of shoes. I won't give away anything more. You've got to see this movie with your family or a friend so you can share the love.

Paper Clips (2004). This is a remarkable documentary about middle school students and teachers in Whitwell, Tenn. (population 1,600), and their mission to understand the enormity of the Holocaust. Their research revealed that during World War II, Norwegians wore paper clips in their lapels as a sign of solidarity with the Jews. The kids set out to collect 6 million paper clips to represent each of the 6 million Jews killed by the Nazis, and wound up with more than 11 million. They then located a cattle car that once transported children to the death camps, and some good souls from overseas shipped it to their school. It became the holy container for the growing mountain of green and red and silver paper clips. Whitwell is now a pilgrimage destination for thousands who come each year to see and to feel what compassion in action can mean. See this movie with your kids. And have some Kleenex ready for yourself.

Flipped (2010). Here is a charming and funny coming-of-age story that your middle school teens will get right away and that you will get even faster, because you've already experienced what the two eighth-graders in 1960 suburbia are going through. My bet is that you will flip over "Flipped" early on and make knowing comments that will annoy your kids who will tell you to shut up because they are into it in their own way. So shhhh! It's really good.

Pride (2007). Do you love underdog sports movies like "Lucas" and "Hoosiers"? Well, here's one you probably haven't seen before, and one you'll like just as much. It's about swimming. Terrence Howard plays real-life coach Jim Ellis, who transforms a tough Philly neighborhood by starting the city's first black swim team. The deck is stacked against them as they encounter fear and racism in their quest to become a championship team. Yup, you've seen the story before, but you always cheer when it's done right, and "Pride" gets it right about as well as any movie ever.

Meet Joe Black (1998). Brad Pitt is an impossibly handsome angel of death who comes to escort Anthony Hopkins, a billionaire and decent man, to the next life. He gives Hopkins a few days to set things in order. Many critics said this three-hour movie was too slow, but its leisurely pace will draw you in just as the lengthy "The Shawshank Redemption" did. The movie affirms life and shows the value of being good.

Call the Midwife (2012-present). This ongoing BBC drama follows a group of young midwives who live in a convent with nursing nuns serving the poor in the London slums of the 1950s and growing as individuals and in community. It's almost as good as, albeit grittier than, "Downton Abbey."

Passione (2010). "Music hath charms to sooth a savage breast," wrote playwright William Congreve. The music and singing and dancing from Naples, Italy, in this documentary directed by actor John Turturro is unrestrained: soaring and soothing and full of passion. It may not help your soul see heaven but it will lift it up and blow you out of your chair.

Departures (2008). We Catholics love rituals: ashes on our foreheads that remind us of time; candles that bless our throats; and palms that speak of glory. So do the Japanese: tea ceremonies that stop time in its tracks; archers who lose themselves and find the target; and, most beautiful of all, the ritual at death when the corpse is cleansed, dressed and blessed in front of the family before putting it in the coffin. Can you imagine a sweet, life-affirming and totally entertaining movie about the Japanese ceremony of "encoffinment"? Well, here it is: a wonderful story about a young man who can't find work as a cellist and, in order to support his family, apprentices as an encoffineer. And, yes (or you wouldn't read it here), you can be sure that it is an upper, an inspiration and a sacrament of a movie that will bless you as you watch. "Departures" won the Academy Award for Best Foreign Language Film in 2009.

That's all, folks! Save me the aisle recliner!

[Michael Leach is a writer and editor who loves movies and television.]

A version of this story appeared in the Feb 28-March 13, 2014 print issue under the headline: Movies (and a TV show) that are good for your soul.