We have no idea which miracle the historical Jesus first worked. Our four Gospels aren’t much help in determining the event. Each evangelist carefully chooses Jesus’ first miracle. It sets the theme for the rest of his Gospel.

Only in John’s Gospel do we find the changing of water into wine at Cana as the first miracle Jesus performs. There are two keys to understanding its meaning and the theme John is creating. First, throughout his Gospel, John never refers to miracles as miracles. He always calls them “signs.” 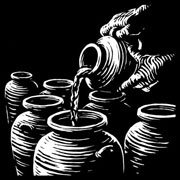 A sign usually leads us to something else. We presume it’s pointing beyond itself to another thing, person or situation. Though all Gospel miracles have some sign value, John leaves no doubt; his miracles are always pointing to something about Jesus that’s usually hidden to people who don’t share John’s theological insights, but that is at the heart of the particular miracle.

The second important point revolves around the containers holding the water-turned-to-wine. Most people presume they’re empty wine jugs. After all, they’ve just “run out of wine.” Empty wine jugs must be standing all around the wedding reception hall.

But that’s not the case. John clearly tells us, “Now there were six stone water jars there for Jewish ceremonial washing, each holding 20 to 30 gallons, Jesus told them, ‘Fill the jars with water.’ So they filled them to the brim” (John 2:6).

Jesus is employing containers that have never held wine. But they’re not “virgin” jugs; they hold the water practicing Jews use for their ceremonial washings, for ritual purification. If such jugs are ever contaminated with wine, they can never again be used for purification purposes.

As the well-known Johannine scholar C.H. Dodd once put it: “By this miracle, John is symbolically showing that Jesus replaced the water of Judaism with the wine of Christianity.” That’s basically the theme of John’s Gospel. It flows from the first sign his Jesus employs.

Yet, followers of Jesus weren’t the first biblical writers to ask their readers to contrast and compare. Third-Isaiah does something parallel in today’s first reading. The prophet responsible for Isaiah 56-66 presents a terrific comparison between Jerusalem in ruins and Jerusalem rebuilt.

The Babylonian leader Nebuchadnezzar had wiped the city off the face of the earth in 586 B.C., and hauled many of its inhabitants into exile. But after conquering the Babylonians in 530 B.C., the Persians permitted the exiles to return to their homeland. Many came back, saw the destroyed city and sent word to their friends back in Babylon to stay there. Life in a foreign country was better than life back in Jerusalem.

The prophet, on the other hand, saw the ruins, stayed put and encouraged his fellow Jews not only to return but to start a rebuilding project. Today’s passage describes his vision of what Judaism and Jerusalem could be if people spent the time and made the effort to build the city once again from the ground up. Few people shared his vision. They could only compare the present city to the past, not the future.

Paul also contrasts and compares in our 1 Corinthians passage. He just spent the second half of Chapter 11 condemning some in the church for the way they celebrated the Lord’s Supper, more concerned with distinguishing one group of people (the poor) from others (the rich), than with being united as the one body of Christ. And he begins this chapter by pointing out how the gift of tongues is actually dividing the community instead of being a Spirit-given help to benefit all its members.

Not a pretty picture. Yet, the apostle is convinced each Christian community has within itself enough gifts of the Spirit to make it a viable, forceful representation of the risen Christ. Just one kicker: He’s convinced that will only happen if we employ those gifts for the common good.

Fully aware of the weaknesses of some in his community, Paul is still willing to hope for a future in which those weaknesses, through the loving use of each person’s natural, Spirit-given abilities, can be turned into the strengths the risen Jesus expects each Christian community to possess. What a comparison! Who among us is willing to make that insight the theme of his or her life ?