Not everyone's happy with God's forgiveness.

When I preached on these three readings years ago while in residence at our cathedral, I got lots of feedback -- little of it positive. One man, for instance, came up after the Eucharist and angrily informed me, "I didn't like that sermon about forgiveness at all." Then, whirling around as he was going out the door, he yelled, "Thank God my two teenage boys didn't hear that [expletive]! If they had, I'd never be able to control them again!" 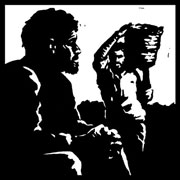 How does a follower of Jesus deal with control, fear and forgiveness?

Moral theologians often remind us that no action performed out of fear will help determine where we'll spend eternity. God only counts the free things we do; good to know when we're forced to do something "bad," but not when we do something "good" out of force or fear, like going to Mass as kids because our parents gave us no choice. Couple this theological opinion with today's psychological insights that very few of our actions during any given day are completely free, and we've got a lot to think about.

We probably do a fair amount of good every day simply because people expect it of us. We're afraid to let them down, or fearful of the reputation we'd acquire if we didn't do it. Fear can often guarantee we do the "right thing." But it also takes away the freedom God expects us to have.

One of our most significant biblical passages is the Genesis 32:23-32 narrative that explains why Israelites are called Israelites. The sacred author divides the title into three separate Hebrew words, coming up with an etiological explanation that it means "someone who wrestles with God."

This pericope describing Jacob wrestling with God was originally composed in a "fertility cult" environment: a culture in which organized religion guaranteed fertility for someone's family, animals and fields by supplying them with the special word, gestures and behavior that controlled the actions of the specific fertility gods and goddesses in their lives.

Such a belief is simply "Kryptonite" religion. Just as Superman is rendered helpless when confronted with the smallest piece of this element from his home planet, so the fertility gods and goddesses are rendered helpless by someone's words, gestures and behavior. Whether they want to or not, they're forced to give in to the petitioner's demands. A fertility cult, if practiced correctly, ties the gods' hands behind their backs. (Any resemblance between these pagan practices and the assurances I received as a child about heaven being guaranteed if I received Communion on special days, said a prayer nine times, or wore a specific medal at the moment of death, is purely coincidental.)

On the other hand, Jacob's descendants -- the Israelites -- boasted that they wrestled with Yahweh, their God, refusing to engage in anything that could even slightly imply they were in the business of controlling him. Yahweh was not only passionate for the freedom of his people; his people were passionate for the freedom of Yahweh. Like all honest relationships, their encounters with their God entailed lots of wrestling.

Just as all of us grow when we experience good relationships, so the ancient Israelites grew in their relationship with Yahweh. Their personalities and actions changed, enabling them over time to acquire completely new value systems. They gave Yahweh "permission" to grow, constantly experience dimensions in him. A forgiving Yahweh also gave them "permission" to grow, always offering them opportunities to become new people.

Forgiveness is an essential part of the mix. We can't have a life-giving, wrestling relationship without it.

Of course, as we hear in today's Ezekiel reading, some will always have problems with the personality-changing effects of good relationships. They're more comfortable dealing with people as they were, instead of who they actually are, or can become. They resent that the God of the Israelites always provides those who relate to him with the opportunity to change. No one, for good or bad, is locked into her or his past behavior.

Matthew's Jesus agrees. It's easy to determine which son eventually carries out his father's will.

But Paul's famous Philippians 2 hymn about Jesus' "emptying" himself might be the most insightful of our readings. It could explain why this Galilean carpenter didn't make his move for 30 years. As a human being like us, it took that much wrestling with God before he could actually identify with the least of his brothers and sisters. If so, he had to forgive himself frequently for his former frame of mind, else he wouldn't have been free enough to empty himself and eventually surface the divinity residing deep inside him.

An interlude of mercy

During Lent, we prepare to make an honest response

Humility is an attempt to see ourselves honestly