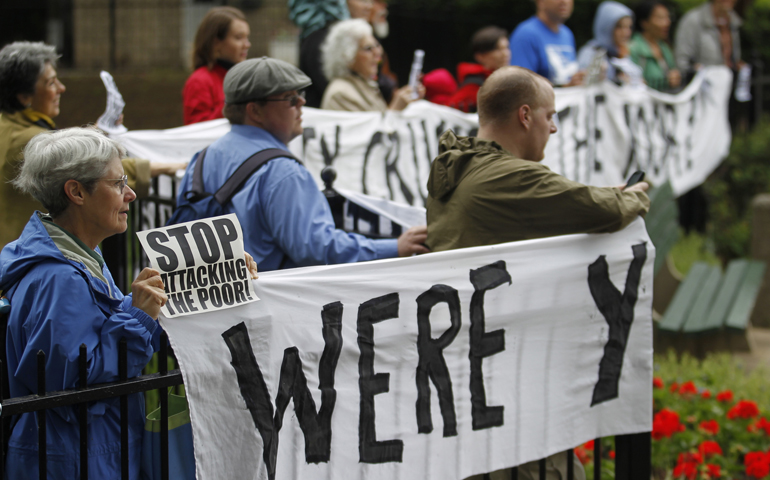 Protesters gather outside Georgetown University as Rep. Paul Ryan speaks in 2012 at the campus. Several violent incidents involving controversial speakers at universities this year prompted the Senate Judiciary Committee to have a hearing in June on free speech on college campuses. (CNS/Bob Roller)

To say we live in an age of intense partisanship is about as obvious as acknowledging precipitation during a hailstorm.

"If you go back to the days of the Civil War, one can find cases in American political history where there was far more rancor and violence," said Stanford political scientist Shanto Iyengar. "But in the modern era, there are no 'ifs' and 'buts' — partisan animus is at an all-time high."

One byproduct of this factionalism is a special hypocrisy which allows hard-core supporters to justify in their bloc what they condemn in another. Look at the about-face both liberals and conservatives engaged in when Kathy Griffin held a likeness of President Donald Trump's decapitated head versus when Ted Nugent told President Barack Obama to "suck on my machine gun." Anyone who was disgusted by only one of these incidents might consider how deep their criteria for appropriate behavior truly run and whether they are part of our partisan problem.

Despite the duplicity, I suspect there are many Americans across the political spectrum who want all politicians to be held to the same standard, regardless of the letter that follows their name. As former Republican Rep. Bob Inglis Tweeted at Speaker of the House Paul Ryan, "You know that you would be inquiring into impeachment if this were a D."

.@SpeakerRyan you know this isn't true. You know that you would be inquiring into impeachment if this were a D. https://t.co/mBFn4aCGi4

What role might Christians play in putting this ideal into practice? Pope Francis said, "A good Catholic meddles in politics," while also urging believers to avoid the temptation of becoming "Christians of the 'right' or the 'left.' " The question, then, should not be what would a good Democrat or Republican do, but what would a good Christian do? What would Jesus do?

Refreshingly, many leaders in the U.S. church seem to be taking this message to heart, calling out President Trump's policies that conflict with Catholic social teaching with vigor rivaling that which they demonstrated in challenging President Obama.

Some voices, however, have been noticeably quiet.

Bishop Robert Barron is one of the most prominent Catholic figures in the United States, with more than a million followers on Facebook. His Catholicism documentary series has become ubiquitous in confirmation and RCIA classes, and his Word on Fire online ministry provides insightful Catholic commentary on films, books, and news of the day.

Occasionally, Barron delves into politics. He reviewed President Obama's The Audacity of Hope, offering both praise for Obama's soaring rhetoric and criticism for his perceived discomfort in applying moral absolutes to politics and his pro-choice views, which Barron also found fault with in Sen. Edward Kennedy. In a video on Paul Ryan's claim that Catholic social teaching informs his economic vision, Barron deemed Ryan's explanation of the relationship between subsidiarity and solidarity as accurate. Intriguingly, he dismissed "a sort of Ayn Rand objectivism, whereby it's simply the pursuit of the individual self-interest that is given moral weight," as a threat to solidarity without contending with Ryan's well-known affinity for Rand.

Barron has had next to nothing to say about President Trump, but he recently waded into the Kathy Griffin controversy. After calling Griffin's photo what it was — "reprehensible" — he tried to place it in the broader context of a theme he often returns to: the breakdown of reasoned argument in American public life. From his perspective, the barbarity behind Griffin's image is part of this larger issue, which, he insisted, is evident in college protests throughout the United States.

"The American campus has become a place of violence," asserted Barron. "Conservative speakers … are regularly bullied, and shouted down, and attacked, and, in some cases, really physically assaulted." The cause, he suggested, is "the almost complete lack of what we would classically call argument.

"I think there's a tight correlation between this kind of violence and the radical subjectivization of truth and ethical values that's been happening on the left now for a long time … the complete relativizing of any claim to objective truth in the epistemological order or the moral order and instead the hyper-valorization of the self-creating will."

Barron diagnosed this as "voluntarism," or "the valorization of voluntas, will, over intellectus, over mind. The will has primacy. The will to power has primacy over any claim to truth." The solution he presented is a "much better epistemology, that is to say, a much clearer account of objective truth."

Barron was right to identify a collapse in rational debate in our country, though he failed to distinguish between people who have reached a different conclusion than he has about the truth of a particular matter and those who do not believe in the existence of objective truth at all. Someone who disagrees with him that same-sex marriage is morally problematic, for example, does not necessarily think there is no such thing as absolute truth; they might simply believe his conviction on that matter is wrong.

He also grossly overstated the violence he sees in college students who protest conservative speakers. At the very least, he did not concede that reacting to people with whom one disagrees using aggression rather than logic is not unique to "the left," as evinced by Rep. Greg Gianforte and a number of Trump rallies.

All this brings us to the elephant in the room, or rather, the White House. To single out college students, Kathy Griffin, and "the left" as culprits in the disintegration of valid debate or trust in moral absolutes is an extraordinarily selective reading of the problem.

President Trump, to quote his predecessor, is "not really a facts guy" (see here, here or here). While the president's dishonesty sometimes looks like a calculated tool to get what he wants (which, in his defense, is not exactly new in politics), in many cases, he genuinely seems to believe in the power of the "self-creating will" with which Barron took such issue. The truth in his eyes is apparently whatever he thinks it is at a given moment, despite any evidence to the contrary. When asked by a lawyer if he had lied about how much money he has, he responded, "My net worth fluctuates, and it goes up and down with markets and with attitudes and with feelings, even my own feelings, but I try."

This faith in one's ability to determine what is and is not real extends throughout the president's administration, with advisor Kellyanne Conway famously defending press secretary Sean Spicer's lies about the size of President Trump's inauguration crowd as "alternative facts."

It is unreasonable to expect Barron to perfectly balance his analysis of every issue to prove his lack of bias. Not every example can be cited to make a point, and with President Trump's mendacity well documented, one could argue that there is no need for Barron to add fuel to the fire. Given his considerate and consistent objections to liberal politicians, however, Barron's unwillingness to speak out when President Trump and other Republicans fall short of Catholicism's standards is unsettling.

There is a perception that the hierarchy of the American Catholic Church is in lockstep with the Republican Party. It is important to note that this view is not exclusively held by liberals, atheists, or people who are averse to the faith. I have seen many devout Catholics express their dismay at bishops and priests who, in the run-up to the 2016 election, informed their flock that when they went to the polls, their sole concern should be choosing a candidate who opposes abortion. Never mind any proposed Muslim ban. Never mind climate change denial, which flies in the face of priorities Pope Francis has raised as absolutely essential for Catholics. Never mind promises to repeal legislation which has expanded health care coverage for millions with "something terrific." The "terrific" bills being considered could leave more than 20 million people without insurance.

These concerned Catholics were not expecting bishops or priests to endorse Hillary Clinton or disregard the church's defense of life. They simply wondered if there were any political sins that would not be instantly absolved by opposition to abortion.

To be fair, the United States Conference of Catholic Bishops has risen to the occasion since the inauguration. They recently said that elements of the Senate's Better Care Reconciliation Act would "wreak havoc on low-income families and struggling communities, and must not be supported." The bishops praised the U.S. Court of Appeals for the 9th Circuit's decision upholding the preliminary injunction on President Trump's travel ban, and they called his withdrawal from the Paris Climate Agreement "deeply troubling." As Jesuit Fr. Thomas Reese, said, "Some bishops argue that they have spoken out on these other issues but that the media only covers the bishops when they participate in the culture wars."

That is why Barron's silence is so regrettable. In overlooking President Trump's culpability in violent rhetoric and "radical subjectivization" — both of which clearly upset him —Barron is playing into the partisan narrative that certain sins are worse when certain people commit them, that a D-List celebrity's brutality is worse than the president's.

Ironically, he gives the impression that the call to objective moral truth should be subjectively applied.