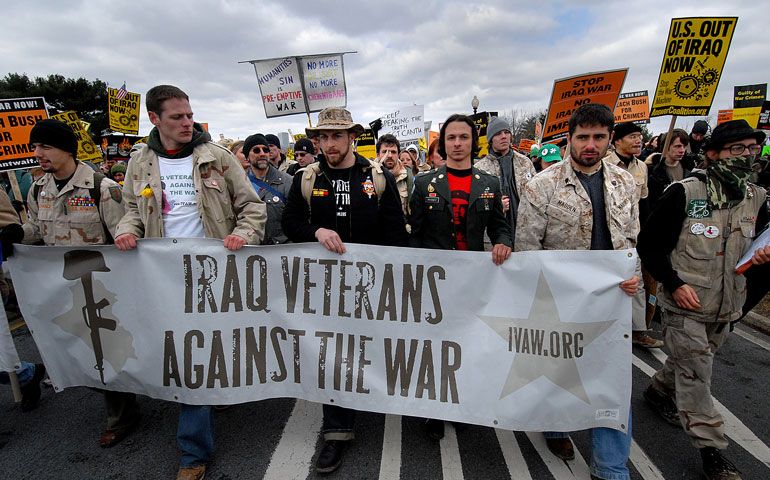 Members of Iraq Veterans Against the War join a rally in March 2007 in Washington, D.C. (Newscom/Abacausa.com/Olivier Douliery)

What price do men and women pay when they grow up in value systems that prize love, justice and mercy, and then serve in wars that undermine those very values? Can one who violates those core principles in horrific ways, or merely witnesses such atrocities firsthand, return unharmed to civilian life? What does society owe those men and women in return for that experience? Finally, can a society that subjects its members to such ordeals maintain its authentic embrace of those values?

Two recent works confront these questions in their explorations of the moral dimensions of the Iraq and Afghanistan wars.

KILLING FROM THE INSIDE OUT: MORAL INJURY AND JUST WARBy Robert Emmet MeagherPublished by Cascade Books, $21

In Killing From the Inside Out, Robert Emmett Meagher writes a compelling exploration of a syndrome called "moral injury" that soldiers endure when they go to war. It results from the widespread and almost inevitable violation of their essential values, their character or nature, when they commit violent acts against others -- even when the military, the broader society and the just war tradition celebrate those acts.

Meagher notes that veterans struggle to reconcile their conduct in war, their actions that in any other context would constitute breaches of humane and Christian values, with their fundamental ground of being. This struggle too often becomes unbearable, and many soldiers and veterans take their own lives.

In fact, Meagher begins his study in September 2012 when then-Secretary of Defense Leon Panetta acknowledged that military suicides had reached epidemic proportions. The vast majority do not take their own lives, but they carry their burdens heavily.

Highly decorated Vietnam veteran Karl Marlantes explains this succinctly: "The Marine Corps taught me to kill but it didn't teach me how to deal with killing."

Meagher sees the problem as the inevitable result of a contradiction at the heart of long-standing Christian compromise with evil. It is not that these soldiers do not sufficiently understand or embrace the moral legitimization that just war theory extends to their actions, but rather that just war seeks to make "right" that which soldiers know in their souls to be intrinsically wrong.

The bulk of Meagher's intricately argued and richly researched work explores the compromise that Christianity made with its core values in order to make peace with the coercive power that Christians exercise when they wield temporal power.

Though the term "moral injury" is relatively new -- Meagher dates its origin to Jonathon Shay's 2002 book Odysseus in America: Combat Trauma and the Trials of Homecoming -- it afflicted soldiers as long ago as the Trojan War and likely before even then. Meagher devotes much of his book to tracing its history from classical times up through the emergence of the Christian just war tradition. He finds that early Christians insisted that combat contradicted Christ's powerful instruction to love one another as he has loved, and that violations of that fundamental Christian principle troubled soldiers' souls.

Combat, like sex -- a subject on which Meagher spends a surprising amount of pages -- stirred men's passions. Early church fathers Tertullian, Cyprian and Origen all asserted that Christians had to transcend their passions, and so could not serve in the military. To do so would put their souls at risk and contravene one of Christ's primary instructions. They would become "polluted."

But Constantine's conversion to Christianity, and his elevation of the faith to privileged status, aligned the church's interests with the Roman Empire's success. Church leaders began to formulate paths that allowed Christians to defend the state in battle. Ambrose and Augustine formulated the basis of just war doctrine, and, much later, Thomas Aquinas developed it further still.

But even in the time of the Crusades, the church saw returning soldiers as "polluted" by their battle experiences, and insisted on a cleansing period -- in some cases insisting that they abstain from Communion for three years. Soldiers and church leaders alike recognized the moral injury soldiers had endured and established reintegration practices that aimed to reconcile them to the Christian community, to God, and to themselves.

Today's soldiers face a different struggle, for the community no longer sees their combat actions as morally problematic. There is nothing to heal because there was no transgression. They are heroes, to be exalted and extolled -- at least superficially so.

Yet many active-duty soldiers and veterans do not see their experiences positively. They worry about what they have done. It follows them home, haunts their sleep, troubles their souls.

In his 2008 memoir, Unpacking Inferno: The Unmaking of a Marine, Iraq War veteran Tyler Boudreau explained, "When a Marine shoots better than his peers, he's admired and he's handed medals and badges and promotions -- all to encourage him to pull the trigger with another man in his sights and kill him. Like it or not, that's desensitization. But desensitization doesn't eliminate morality from the consciousness. It merely postpones cogitation. Sooner or later, when a man's had a chance to think things over, he will find himself standing in judgment before his own conscience."

Where Meagher's study ranges over two millennia of history, examines the thinking of Christianity's most luminous theologians, and explores great texts of Western culture to frame his case for war's sinfulness, Nan Levinson stays firmly focused on the experiences of war veterans of mostly modest means and education in the last decade and a half.

She does not address "moral injury" by name until the very end of her history of Iraq War veterans' efforts to halt the wars in Iraq and Afghanistan. But her book inevitably explores the ways that this concept led veterans to oppose the war they had executed.

WAR IS NOT A GAME: THE NEW ANTIWAR SOLDIERS AND THE MOVEMENT THEY BUILTBy Nan LevinsonPublished by Rutgers University Press, $29.95

Most of the veterans that Levinson portrays in War Is Not a Game became disaffected because they realized the harm they did to others and themselves. They bear witness in various ways to peace, but mostly coalesce in and around a group called Iraq Veterans Against the War.

The organization never grew to the size of Vietnam Veterans Against the War, on which it was loosely modeled and from whose members it has drawn wisdom and support, but it has significant cultural power because America puts so high a premium on military service. Its members' military history legitimates their critique among many who would reject Meagher's positions out of hand.

Though the veterans whom Levinson follows all seem to know about moral injury through personal experience, that intimate and powerful familiarity does not lead them to the same conclusions that Meagher draws. With few exceptions, they do not see pacifism as the cure for America's bellicosity in Iraq and Iran.

They seem to fall more squarely in the selective conscientious objector category. They object to these wars, to American conduct in these places at this moment, and to the broader purposes -- or perhaps purposelessness -- that brought soldiers to these arenas. They want to end these specific occupations, not war-making overall.

Meagher anticipates this position by pointing out many times in his work that these problems are not unique to 21st-century American wars, but inevitable in every war fought in the past millennium. War, Meagher points out, is inherently unjust.

Levinson quotes from a recent email she received from Vietnam veteran David Cortright. He reported that his military service had placed him "in a situation that went against every moral fiber of my being, a fate I could not accept." He began to heal when he spoke up against war.

This act, which Cortright pointed out did not imply moral purity, "was that fundamental underlying sense of right and wrong -- probably drummed into my brain by nuns during my Catholic education -- that somehow broke through the excruciating dilemma of the time and helped me to make what proved to be a life-saving and life-affirming decision to resist."

He had come fully back to the early Christian rejection of killing, in favor of Jesus' injunction to love one another. And, Meagher would add, so must we all.