The Catholic dissonance on abortion 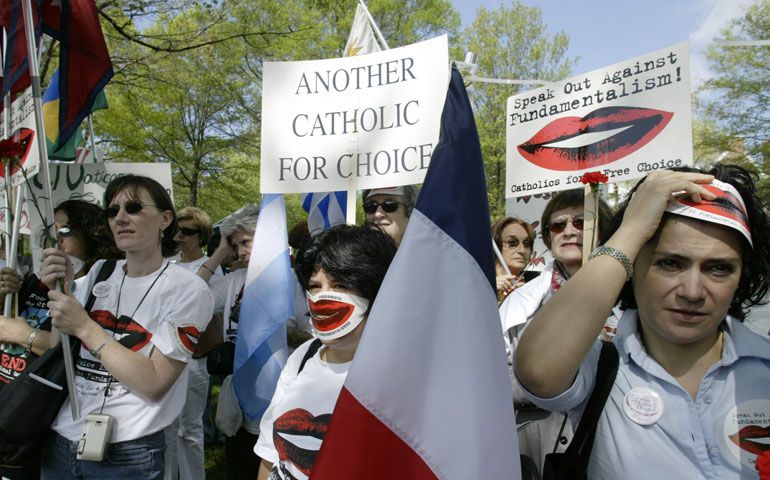 Catholics for a Free Choice supporters march to the Vatican Embassy in Washington in April 2004. (Newscom/UPI Photo/Yuri Gripas)

GOOD CATHOLICS: THE BATTLE OVER ABORTION IN THE CATHOLIC CHURCH
By Patricia Miller
Published by University of California Press, $34.95

Patricia Miller's new book, Good Catholics: The Battle Over Abortion in the Catholic Church, focuses on the tension between two persistent realities over the past four decades: The Catholic hierarchy has consistently condemned abortion as the taking of human life, and most American Catholics have just as assiduously supported its use under certain circumstances. That dissonance between what church officials have in recent decades insisted to be central to Catholic belief, and what most Catholics actually believe and practice, has an engaging and dramatic history that Miller examines in a thorough and nuanced manner.

Miller's central argument is that the U.S. Catholic bishops spearheaded and heavily influenced anti-abortion public policy initiatives over the past four decades, and that the organization Catholics for Choice (formerly Catholics for a Free Choice) has served as an effective counterbalance to the bishops in the public arena. The bishops argued that all Catholics must oppose abortion and support public policies that the bishops have determined to move society most effectively toward abortion's eradication. Catholics for Choice countered that a Catholic, acting in good conscience and for sound theological reasons, might support women's access to legal abortion in certain circumstances.

Miller begins her story with the observation that "when I was growing up in a middle-class Catholic community in the northern New Jersey suburbs in the 1970s and 1980s, no one mentioned abortion. Priests did not inveigh against it from the pulpit on Sundays." Nuns did not mention it in Miller's religion classes through grade school, and young Catholics did not go to anti-abortion marches.

But bishops today place it at the center of Catholic discourse and identity. How did this happen, and how have Catholics responded to the change?

Miller sees abortion's rising centrality to Catholic identity beginning with challenges women posed to their positions within the church. She highlights four pivotal theologians who identified and criticized women's subordinate position within Catholic culture and laid the groundwork for a challenge to that culture and its proponents. Rosemary Radford Ruether, Jane Furlong Cahill, Mary Daly, and Elizabeth Farians generated the theological critique that made the push for reform possible.

Just as these theologians began to publish their work, many bishops at the Second Vatican Council sought a reexamination of the church's long-standing ban on birth control, and Americans in state after state challenged legal restrictions on its sale and use.

The public ferment over access to birth control in the 1960s generated an expectation that the Catholic church, too, would change its position -- an expectation that only grew when word leaked that Pope Paul VI's special birth control commission made such a recommendation to the pope. Just as the U.S. Supreme Court had upheld couples' private rights to use birth control in 1965, American Catholics expected Paul VI to allow couples to make the decisions about contraception for themselves. But Humanae Vitae affirmed the ban.

Miller notes that Americans, including the Catholic bishops, have linked access to birth control and abortion consistently over these decades, and that the debates about both revolve inexorably around who ought to control women's sexual and reproductive choices. For the longest time, this seemed like a settled question -- church officials best interpreted church doctrine and defined what it meant to be a good Catholic. And early polling data suggests that American Catholic women largely followed the strictures male prelates laid down.

But the late 1950s and 1960s saw a sea change in Catholic women's behavior, and a growing divergence between what bishops prescribed and women (and men) actually did in their bedrooms. They gained legal access to birth control just before Paul VI insisted that they ought not to use it. In a few short years, the Supreme Court granted access to legal abortion as well, and the bishops condemned this with much more vigor than they opposed contraceptives. Most Catholic women reconciled this tension by quietly doing in private what church officials condemned in public.

It was only when the bishops worked strenuously to conform public policy to official Catholic teaching -- first for abortion, but later regarding contraception as well -- that Catholic men and women formed Catholics for a Free Choice.

The organization never materialized into a broad-scale social movement. Early efforts to sign up dues-paying members never attracted more than a few thousand people, and the leaders then decided to stop recruiting grassroots support entirely. Rather, the organization found its place by entering the public discourse to assert two big points: that Catholics might tenably be pro-choice, and that the bishops did not represent lay Catholic opinion in public policy debates about abortion.

Miller argues that the organization's efforts allowed pro-choice Catholics to stay in the church and enabled holders of public office to support policies, such as the distribution of condoms to fight AIDS, that would have otherwise been seen as too politically risky. By insisting that ordinary Catholics -- voting Catholics -- would not necessarily follow their bishops' lead on public policy questions, Catholics for Choice enabled political leaders to overcome fears of voter backlash.

Though Miller travels occasionally into theological debates and explorations of popular Catholic understanding of abortion and birth control, she focuses mainly on the public debates about abortion -- and especially on the Catholic public discourse on abortion. Her book is most valuable for offering a comprehensive chronological narrative of this discourse, and especially of Catholics for Choice's role in it.

Telling this story is no abstract exercise for Miller, whose narrative is sympathetic to the efforts of Catholics for Choice. She is a journalist who writes about health care issues and once edited Conscience magazine, Catholics for Choice's official publication. But Miller avoids a partisan tone and remains a reliable guide throughout.

She no doubt had ready access to Catholics for Choice records and this comes through consistently, though she has not written its institutional history -- in fact, there is less about the organization's internal workings than this reader hoped to find. It is fitting that Miller chose to publish this with a university press, as its thoroughness, careful tone and nuanced presentation fit comfortably within academic conventions.

Still, the book will likely give off sparks. But if these sparks inspire people to study this potent moral question in an informed manner, it will have done a service to those on both sides of the divide -- and Miller's book is a good place to begin that study.

Politics | The Catholic dissonance on abortion

Spanish bishops back bill that restricts abortion for rape, health