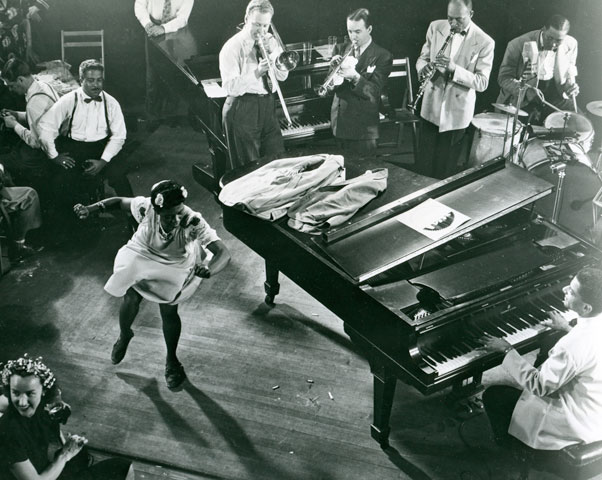 How do we bring about "a world where beauty and justice would thrive"? Farah Jasmine Griffin's Harlem Nocturne describes this quest as it was pursued in 1940s Harlem by three African-American women: dancer Pearl Primus, novelist and journalist Ann Petry, and jazz pianist Mary Lou Williams. In a book that is both a biography of these women and a fond requiem for a section of New York that inspired these artists to create and to work for social justice, Griffin suggests that art and politics, far from being strange bedfellows, can breed enlightened social change.

This book does not intend to provide an exhaustive biography of these three underappreciated artists, nor does it seek to thoroughly analyze their artistic achievements. Griffin does provide an exciting and at times poetically rendered introduction to these artists and to the New York scene of the 1940s. She brings to life the urban community that inspired the best and most socially conscious achievements of these women.

Griffin depicts her subjects as black women who distinguished themselves both through individual achievement and through their efforts to foster community, nurture talent, and expedite positive social change. Griffin argues that they were "artists who are concerned with the lives of ordinary people" and who made "highly innovative art that communicated the aspirations of everyday people."

That these women collaborated with and, in some cases, married whites enabled them to envision a more integrated world, yet it also aggravated their frustration with segregation and intolerance.

Their level of political involvement varied. Primus was clearly the most radical, both in her creative expression and her involvement. Through her studies in anthropology, Primus, born in the West Indies, investigated the life of blacks in the American South and translated her learning and field experience into a choreography that expressed the stress of confinement and the joy of freedom. Returning from a later visit to Africa, Primus imported movements that laid the groundwork for modern black American dance. Like other New York-based artists, Primus joined the Communist Party, leading the FBI to investigate her.

Though she also associated with communists, Petry did not attract the attention of the FBI. She was also no less of an activist for the cause of desegregation and black pride. Covering the developments in civil rights as a reporter for The People's Voice, and depicting the life of a black single mother in her novel The Street, Petry's writing brought greater attention to both movement leaders and those whom the movement sought to help.

Unlike Primus and Petry, Williams did not become involved in political organizations. Yet she fostered change through the force of her musical compositions, her personal care and nurturing of talent, and especially through the role she played as an ambassador of black music.

One would have enjoyed reading of the extent to which Williams's later conversion to Roman Catholicism affected her social activism, but this period falls outside of the temporal scope of Griffin's book. Readers can investigate Williams' blending Catholic faith and racial pride by listening to her albums "Black Christ of the Andes" and "Mary Lou's Mass."

Griffin's Harlem of the 1940s is lively and volatile. One is struck by Harlem's many community organizations that fought for such causes as desegregation of the armed forces and better working conditions for black nurses. Through its strong sense of community, Harlem elected Adam Clayton Powell as New York state's first black congressman and Benjamin J. Davis Jr. as New York City Council's first communist. Harlem streets compelled artists to develop their political consciousness, and Harlem citizens shaped artists' political conscience. Before the riots of 1943 that forever changed Harlem's economy, artists such as Richard Wright, Ralph Ellison and Duke Ellington lived, wrote and played there.

Griffin doesn't limit her discussion to Harlem; she vividly recreates the New York City-wide effort to use art as a means to secure justice. The annual Negro Freedom Rallies, acting in concert with the Double V Campaign (victory against fascism abroad; victory against discrimination at home), teamed powerful speakers like Powell with performances by such artists as Paul Robeson and Primus. The Café Society, the first nightclub in New York to integrate both performers and audiences, featured performers like Primus, Williams, Billie Holiday, Carol Channing and Imogene Coca, many of whom were active in the Communist Party and other social justice efforts. Holiday first performed the anti-lynching ballad "Strange Fruit" at Café Society, and Primus choreographed and performed her dance interpretation of the song there.

A fascinating read throughout, Griffin's Harlem Nocturne demands that we broaden our conception of the "greatest generation" to include these three remarkable women who used their art to wage an important battle on the home front.

A version of this story appeared in the April 25-May 8, 2014 print issue under the headline: Harlem women made art a force for justice.